Signs your vehicle’s clutch is about to fail

The clutch system is a crucial part of any car with a manual transmission. But it can wear out over time, causing issues which might result in difficulties when driving your vehicle, or even a breakdown.

There are sometimes signs that your manual clutch is wearing out, including a squeaking or grumbling noise when the clutch pedal is pressed, difficulties shifting gear and a "slipping" clutch.

Learn more about the signs of clutch failure below, along with information about how a car clutch works. 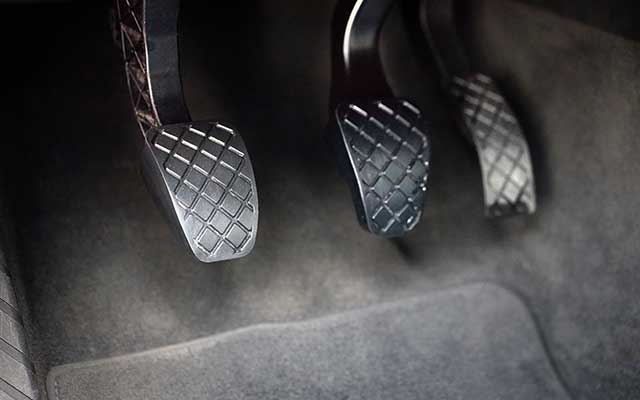 What's a clutch in a car?

In the most basic sense, a clutch is a mechanical device that connects and disconnects 2 rotating plates, allowing movement energy to be transferred from one part of a machine to another.

In a vehicle with an internal combustion engine (ICE) and a gearbox, a clutch separates the engine from the transmission, which, in turn, allows gear changes and for the car to come to a complete stop while the engine is running.

Most clutches are operated by a foot pedal, but some are automatic with no pedal, and these are usually referred to as semi-automatics.


What are the different types of clutch?

There are different types of clutch system that can be present in vehicles. Some of the main ones are as follows:


The different clutch systems have similar functions, but there are differences in the mechanics and how they operate.

It’s worth being aware of what type of clutch system is in your vehicle, as it may mean different maintenance is required.

For example, a single-plate or multi-plate friction clutch operates by using springs to engage and disengage different plates, connecting and disconnecting the engine and transmission.

But they can also be operated by a cable, hydraulic system or electronically.

But the transmission fluid that operates them and the rest of the automatic gearbox deteriorates over time and will need to be changed. This is done as part of a transmission service.


How does a car clutch work in a manual car?

There are different clutch systems that can be present in manual vehicles, so they don’t all work in the same way but the purpose of them is generally the same.

Most manual cars have a single plate friction clutch. This is made up of several components:

On cable systems, the hydraulic components are replaced by a cable that connects the pedal to a lever, which acts on the release bearing in the same way as the slave cylinder.

Cable clutches are usually found on smaller vehicles and motorcycles.

In manual cars and vans, the clutch pedal is located to the left of the brake and accelerator pedals.

When your foot is off the clutch pedal, the clutch is engaged so the engine and transmission are connected, and spin at the same speed.

When your foot is pressed down on the clutch pedal, the clutch is disengaged so the engine and gearbox are disconnected, which allows you to change gears or brake and stop the car without turning the engine off.

Not all manual cars have a clutch pedal. Semi-automatics and vehicles with a sequential or automated manual gearbox (SMG/AMG) don’t have one – instead the clutch is operated electro-hydraulically by a computer.

If you’re new to driving, read our beginner’s guide to clutch control.

What are the signs of manual clutch failure?

Here are some of the main signs your clutch is starting to fail.

If the main symptom you’ve noticed is difficulty changing gears, then this could also be due to a faulty gearbox.

To check whether the clutch or the gearbox is to blame, turn off the engine and try changing gears. If you can then the issue often lies with the clutch.

A squeaking or grumbling noise usually indicates that the release bearing is worn out and will need replacing. This comes as part of a replacement clutch and isn’t something that should be changed separately

If you notice one of the above early warning signs of clutch failure while driving, you should take your car to a garage to get the issue resolved before it causes you to break down.

We'll get you back on the road.

A slipping clutch happens when the material on the friction plate starts to wear out.

This means the pressure plate will move at a different speed to the flywheel, so the vehicle can’t send full engine power through the gearbox to the road wheels.

If your clutch is slipping:

A slipping clutch is a common sign that the clutch is worn out.


What should I do if the clutch suddenly fails?

If your car’s clutch suddenly fails while you’re driving, you should:


Make sure you know what to do if you car breaks down.


How to fix a clutch

You’ll need to take your vehicle to a garage to get your clutch fixed. You should note down any clutch failure symptoms you’ve noticed to inform the mechanic.

How long does it take to fix a clutch?

How long it takes to fix the clutch will depend on the problem and the vehicle – you should speak to your garage to find out how much time they estimate it will take to fix.

How much does it cost to fix a clutch?

The cost to replace a clutch can vary depending on the garage and vehicle make. Generally, you can expect to pay upwards of £300 for parts and labour.

What should I do if there are problems with a clutch after it’s been replaced?

If you have problems after the clutch has been replaced, take it back to the garage who did the work so they can repair it.

Let us take care of any clutch problems.

How long do clutches last?

Clutches generally last up to 80,000 miles or so, but they can wear out more quickly depending on how you drive your car.

There are some ways you can help your clutch last longer.

1. Take your foot completely off the clutch pedal between gear changes and whenever you don’t need to press it.

“Riding” the clutch is the most common reason for premature clutch failure. Even the slightest pressure on the pedal will partially disengage the clutch, causing the release bearing, pressure plate and flywheel to overheat.

2. Put the gearbox in neutral when stationary and release the clutch pedal.

This engages the clutch and releases all the pressure on the components. Always make sure the handbrake is on when the car is stationary and not in gear.

3. Avoid “holding” the car on hills and slopes with the clutch.

This will quickly wear out the friction plate, as it's effectively slipping the clutch in order to keep the car stationary. Press the clutch and brake together to stop the car, and apply the handbrake.

4. Accelerate and decelerate smoothly, changing gears as appropriate to help you do this.

The goal should be to get your foot off the clutch as quickly as possible so as not to cause slippage and unnecessary wear.

You should also perform basic car checks and get your car serviced regularly so an expert can spot any warning signs or problems with the vehicle that may cause the clutch to wear out.

Take a look at our complete guide to car servicing.

Do automatic cars have a clutch?

Automatic cars don’t have a clutch pedal, although they do have internal clutch packs and a torque converter. They also usually have a simplified gear selection system.

While manual cars have a gear stick and normally at least 5 gears to choose from, automatic vehicles usually have a shifter which only lets you choose between forward and reverse gears, as well as neutral and park.

Some have a “manual” mode, which allows the driver to decide when the car changes gear, often via paddles either side of the steering wheel.

Generally, the gearbox chooses the right gear for the car’s speed without the driver having to do anything. The torque converter allows the car to come to a complete stop while still in gear.

Learn more about the differences between manual and automatic cars.


Do electric cars have a clutch?

Most electric vehicles (EVs) don’t have clutch systems or gearboxes.

They usually only have 1 reduction gear as electric motors are able to produce high levels of torque from a standstill and go on to achieve much higher revs than an ICE.

Learn more about maintenance and repair for electric cars.