The first group of apprentices to join an innovative new training programme were recognised at an award ceremony at the AA’s headquarters in Basingstoke on 9 May.

The group began their training on 5 November 2018 as the first cohort to join the AA’s new garage-to-roadside Patrol apprenticeship scheme. Now six months in to their three-year programme, the apprentices, who will ultimately become the next generation of AA roadside patrols, were issued with certificates and personal toolkits after passing their gateway exams.

They have already begun work in local garages across the South of England and will now be issued with AA-specific tools, including diagnostic equipment and battery testers, to continue their training before ultimately progressing to join the AA’s patrol force on the road. 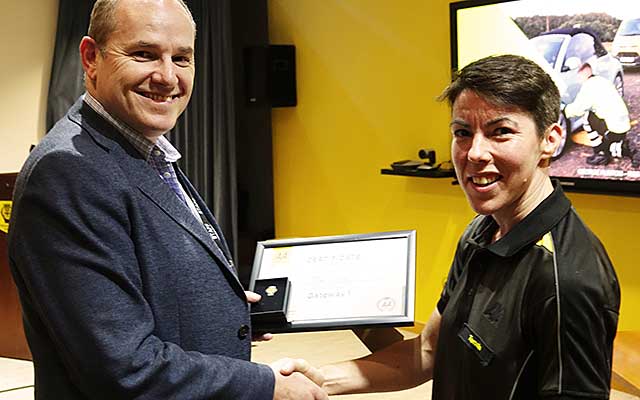 A special award was presented to apprentice Tamsin King in recognition of glowing commendations already received from her colleagues and customers.

Trevor Barkham, Technical Training Manager at the AA, said: “Normally we would select new patrols from skilled mechanics who have already worked in the industry for several years. This scheme is the first of its kind and has been designed to develop emerging talent by training apprentices across a range of skills, from in-garage mechanics through to roadside repairs.

“The programme gives ambitious young trainees the chance to learn on the job and alongside experienced patrols. It’s a competitive environment so I’m delighted to recognise our first group of hard-working apprentices on their great success so far, and mark this milestone achievement as they progress to the next phase of their training.”

Following the success of the scheme, the organisation is now preparing for its next intake which will welcome 15 new apprentices across Manchester, Birmingham and London later this year.