Living with a 40kWh Leaf

Having enjoyed two generally carefree years with their 30kWh Nissan Leaf, the Crowder family took delivery in October 2018 of the new version, which has a larger, 40kWh battery offering greater range between charges and a host of technological innovations.

The new Nissan Leaf looks better than the original and feels more solid – the doors have a less ‘metallic’ sound when shutting and there is less hard plastic in the cabin. 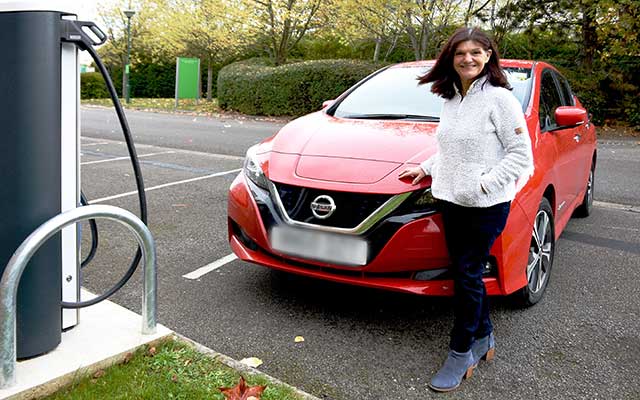 It’s more comfortable with an easily adjustable driving position (although the steering wheel only has up and down adjustment), has stacks of head and leg room front and back and a capacious boot.  Refinements include heated seats and steering wheel as well as an excellent Bose sound system.

The dashboard and instrumentation are, if anything, fussier than the original with lots of buttons as well as the fairly small (i-Pad size) touch screen transported from the previous model, although controls are fairly self-explanatory.  Familiar are the golf-ball ‘gear’ lever and main control functions.  Gone is the foot-operated parking brake and CD player and the slightly annoying ‘jingle’ that played every time the car was switched on.  New are the Pro-Pilot function, the ‘E’ pedal, apple car-play and better i-phone connectivity and far better systems management.

Press the start button and the screens come to life – no bleeps or jingles.  Electronic brake off, select direction of travel and touch the throttle – the car moves in complete silence, although there is a pedestrian warning sound which can’t be heard inside the cabin.

Take your foot off the throttle and the car immediately starts to slow thanks to the regenerative effect of the motors putting energy back in the battery.  This is more pronounced if you select ‘B’ mode while if you select ‘E-pedal’ the car will rapidly come to a halt if you take your foot off the throttle.  It’s easy to get used to one-pedal operation, rarely needing to use the brake pedal even in city congestion.

The easy to use Pro-Pilot function offers semi-autonomous driving on the motorway, keeping the car in lane as well as a safe distance from the vehicle in front.  But take your hands off the steering wheel and the dash soon lights up in red, warning you to take hold again – it’s very clearly ‘driver assistance’ rather than ‘automation’. Other refinements include automatic main beam dipping (the led lights are excellent) and windscreen wiper operation.

It’s not exactly a hot hatch, but the acceleration is extremely smart and with full torque to the motor from the word go, leaves most cars behind when the traffic lights go green.  0-60 is around eight seconds, and the top speed just short of 100mph.  It’s surprisingly composed along twisty and uneven roads – certainly more so than its predecessor.

The 40Kwh Leaf has a Type 2 (rather than Type 1 of the old model) socket along with a CHaDeMo 50kW fast charge socket, under a panel at the front of the bonnet.  The Type 2 socket means the car can be charged on tethered white-label Tesla destination chargers. The car automatically locks a connector in place (unlike the previous model) and it has to be released with the press of a button on the dash or the key fob. 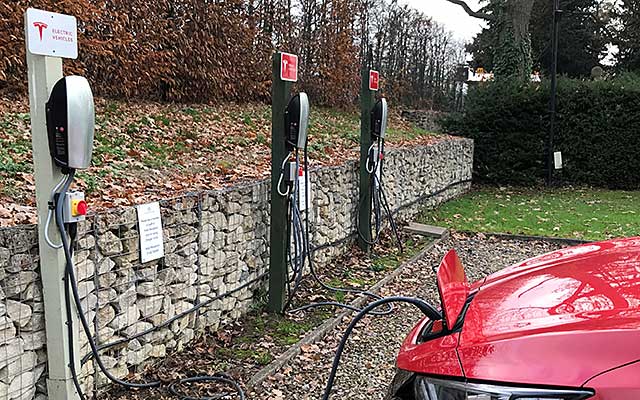 We charge the car on a Chargemaster 7kW charger timed to use off-peak electricity which is more than adequate for an overnight charge.  The 50kW rapid chargers will put in around an 80% charge in just over half an hour.

The range of the car is much improved.  While the NEDC claim is a wholly-unrealistic 235 miles, we have found it to offer a practical 145-170 miles – but somewhat less if you hammer it on the motorway.

It’s not cheap to buy, but is extremely cheap to run, with zero VED and there are still free-vend chargers around.

Talking about chargers, you may need a selection of charger operator RFID cards in the car and Apps for the different UK networks – and even more if you venture into Europe.  We find that most of our charging needs are met by Polar (covering Chargemaster, Charge Your Car and some regional networks such as Source West); Ecotricity for motorway chargers; GeniePoint and Pod Point.  The sooner all chargers accept contactless debit cards, the better.