Half a million learners waiting for tests

DVSA data1 obtained by the AA Driving School has revealed that the backlog for driving tests in the UK quadrupled in just one year, following disruption in the pandemic.

Lockdowns, restrictions, and delays to practical driving tests returning caused the backlog to soar from 147,716 learners to 592,987 learners one year later (31 August 2020 compared to 31 August 2021)

Driving tests and lessons stopped during the lockdowns last year and have continued to bring disruption in 2021. A backlog of 147,716 learners waiting for practical tests tripled in just one month to 377,156 (31 August & 31 September 2020).

In June this year, the DVSA announced2 additional measures were being put in place, including making 15 to 20,000 more test slots available per month.

Demand is still high and there needs to be a clear plan in place to address this.

The DVSA also stated3 that other actions were taken to improve the backlog such as; holding tests out-of-hours, including on weekends and public holidays, offering overtime and annual leave buy back for examiners. It also held a campaign to recruit 300 extra test examiners, and asked people who were qualified to conduct driving tests to return to the job, including asking recently retired examiners to conduct tests.

However, between June and August 2021, the backlog data shows that it increased by 75,076 despite these additional measures.

The DVSA said in November 20213: “[because] almost half of candidates [are] failing their practical test, and demand is currently extremely high for tests, learners should only take their test when they are confident they can pass.”

It added there were 538,832 candidates who had currently booked a practical test within its 24-week window, however this reflected test slots rather than individual pupils because in some instances businesses reserve tests and later cancel them.

Department for Transport statistics4 show the average pass rate for practical car tests from 2015 to 2020 was 46.4%, and the latest data available for 2021 shows the pass rate is currently above average at 51.6%.

Mark Oakley, AA Driving School Interim Managing Director said: “The figures show what we have been hearing from learners throughout the pandemic: the queue for tests is long and more needs to be done to address it.

“Learners were left disappointed when the government decided not to extend theory tests certificates that expired in the lockdowns, as they did with MOTs, and it’s disheartening to see that the practical test backlog reached half a million tests this year.

“Driving instructors adapted to make lessons safer when restrictions lifted, but the DVSA has still not caught up enough to meet demand and questions need to be asked about what support they can get to ensure we don’t end up in the same position if restrictions come back.

“The DVSA has asked learners to help by only taking their test when they are confident they can pass. This would help reduce the backlog however pass rates are now higher than normal so there’s evidence learners are being more cautious and getting extra practice in before their tests.

“Although measures were introduced this summer to support the test booking system, including hiring more examiners and opening up more test slots, demand is still high and there needs to be a clear plan in place to address this.” 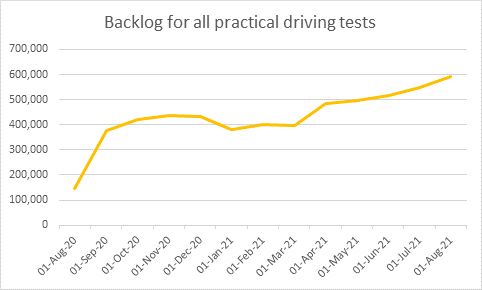 Background on tests returning in 2021

1FOI submitted on behalf of AA Driving School in September 2021.

3DVSA additional correspondence in relation to FOI submitted by the AA Driving School.