The industry's initial reaction was to attack the tests, claiming that cars would have to be built like battering rams to pass

The industry's initial reaction was to attack the tests, claiming that cars would have to be built like battering rams to pass them and that it would be impossible to produce a 4-star car. Five month's later Volvo's S40 became the first 4-star car and the industry's attitude towards Euro NCAP started to change.

20 years on and car manufacturers now work closely with Euro NCAP and actively support the development of new tests and ratings.

Euro NCAP has crashed more than 1,800 new cars, published more than 600 safety rating to help car buyers choose safer cars and, most significantly, has helped save more than 78,000 lives in Europe since 1997.

We're proud to have been one of the founding members of Euro NCAP alongside the UK Department for Transport, Swedish and Dutch Governments and the FIA. 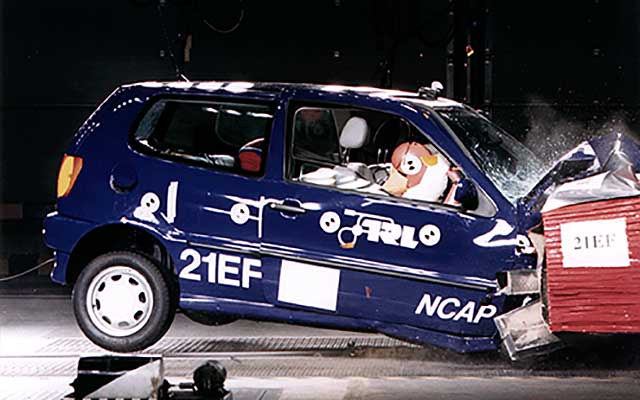 Twenty years ago car buyers really didn’t have a clue if one car was safer than another and we really only had their word for it if the manufacturers highlighted specific ‘safety’ features.

The only crash test required by law at the time was a 30mph frontal crash. Crash-test dummies weren't used, the results weren't published, and whether or not the car passed depended only on how far the steering wheel moved!

The EU had been trying to introduce more stringent front and side impact crash tests that all new cars sold in Europe would have to pass but the car industry had been lobbying hard to water down these tests.

Eventually, following lobbying by the FIA and an intervention by the European Parliament new tests were agreed, but the directives would only apply to new car models launched from 1998 and wouldn't apply to all new cars sold until October 2003.

Euro NCAP set out to improve the safety of cars further and faster than regulation ever would. It took the minimum requirements defined in the new directives as a starting point – broadly equivalent to a 1-star rating – applied a higher test speed in the case of the frontal impact test and then challenged the industry to do better.

AA President Edmund King recalls: "These tests were dramatic. The Rover 100 was described as having ‘improved safety features’ – it had side impact bars and an optional driver airbag – but my first sight of the car after the frontal crash test made me shake and feel sick. Even today looking at the pictures of the half-squashed Rover makes me feel uneasy.

"Indeed, the vision stayed with me and I obviously passed it on. Some three years later when my first son was born my wife was looking for a child-minder but decided not to go with the lady up the road as she had a Rover 100 and it wouldn’t be safe. I remember police officers contacting us for the full results and some of them refusing to drive that model."

To mark 20 years of improving vehicle safety through crash testing, Euro NCAP has crash tested an old Rover 100 and a recent Honda Jazz to show just how much car design has improved.

Everything Euro NCAP tested, including the Rover 100 which achieved only a 1-star rating,  met the standards required by law at the time, and, even with the new directives coming into force, the Rover 100 could have remained on sale unchanged until 2003. Instead, and as a direct result of Euro NCAP, it was removed from sale less than six months later.

Up there with other major milestones

The achievements of Euro NCAP in terms of saving lives are up there with the milestone safety improvements brought about by the seat belt and the breathalyser.

In fact, Euro NCAP is probably a greater achievement as it has brought about dramatic improvements in car safety and saved thousands of lives, not through new regulations or legislation but because some determined individuals and organisations were willing to take on and challenge the car industry.

The achievements of Euro NCAP in terms of saving lives are up there with the milestone safety improvements brought about by the seat belt and the breathalyser.

Continuing to play a vital role

Euro NCAP will continue to play a vital role, encouraging manufacturers to compete on safety and continuing to drive up safety standards in a rapidly changing world of increasingly sophisticated crash prevention and driving automation.