50 Walks in the Yorkshire Dales

Try this sample walk from the latest edition of 50 Walks in the Yorkshire Dales.

About 50 Walks in the Yorkshire Dales

Walking is one of Britain's favourite leisure activities, and this guide to the Yorkshire Dales features 50 mapped walks from 2 to 10 miles, to suit all abilities.

Buy 50 Walks in the Yorkshire Dales from the AA Amazon Shop. 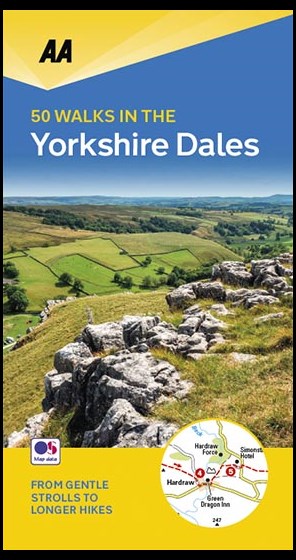 One of the famous 'Three Peaks' of the Dales (the others, Ingleborough and Whernside, are visible from the walk), Pen-y-ghent's distinctive profile dominates the landscape. Its name, which is Celtic, means either 'the hill on the plain' or 'the windy hill'. Both are appropriate. The ridges that stripe its sides are the result of different rock strata – millstone grit on top, softer shales beneath and, halfway up, a band of limestone.

Limestone dominates most of the walk. The characteristic drystone walls line the track at the start of the walk, and  form the boundaries to the fields in the second half. The landscape is susceptible to dissolving by water, forming ‘pots’ – large holes into underground cave systems. From Point 2 on the walk you could detour about 300yds (274m) north to see one of them, the huge hole of Hull Pot. In wet weather a stream tumbles down its limestone crags into the pot’s depths. Take care great as you approach the hole. It is also easily seen from the upper slopes of Pen-y-ghent.

This first part of the walk (up to Point 4) follows the Pennine Way. The Pen-y-ghent Café is the walkers' centre for the area, selling a vast range of books and maps, and running a booking-in and -out service for those walking or climbing in the area. From the summit of Pen-y-ghent, and as you descend, you will notice the limestone quarries around Horton in Ribblesdale – and maybe hear the sound of blasting. You may consider them an intrusion into a National Park, but although National Park policies are weighted against quarry development, many workings often precede the designation of the Yorkshire Dales National Park in 1954.

The final part of the route follows the Ribble Way, which runs beside the river for 70 miles (113km) from the Dales to the sea. For part of its length, north of Horton in Ribblesdale, it follows the same route as the Dales Way, another long distance footpath that goes the 80 miles (129km) from Ilkley in West Yorkshire to Bowness-on- Windermere in Cumbria.

Visit the lively market town of Settle, to the south of Horton in Ribblesdale. If you're there on a Tuesday, you'll find its market in full swing, in front of the impressive arched Shambles building, with two storeys of shops and homes above them. Up the High Street is a large and ornate 17th-century house called The Folly, which has a museum of local life, and scattered through the town are old houses with carved lintels showing when they were built and their builders' initials.

The Pen-y-ghent Café, as well as providing all its other services, does good, energy-giving food, specially geared to the needs of walkers. The village's two pubs, The Crown and the Golden Lion, both offer meals and serve good Yorkshire ales.

As you ascend Pen-y-ghent in the spring, you will notice patches of the attractive purple saxifrage growing along the hill's distinctive ridges. Saxifrage means 'stone-breaker', and nearly all the members of the species live in rocky places, their roots penetrating into cracks between the stones to use the moisture trapped there. Purple saxifrage flowers the earliest of all the saxifrages and has five slightly-pointed petals of a delicate purple colour. The tiny flowers form dense clusters among the rocks. As its Latin name (saxifraga oppositifolia) suggests, its leaves sit opposite each other along its rather flat stem, which has a creeping habit. A characteristic plant of many high latitudes, the purple saxifrage is the official flower of Nunavut Territory in the very north of Canada.

Buy 50 Walks in the Yorkshire Dales from the AA Amazon Shop.