50 Walks in the Lake District

Try this sample walk from the latest edition of 50 Walks in the Lake District.

About 50 Walks in the Lake District

Walking is one of Britain's favourite leisure activities, and this guide to the Lake District features 50 mapped walks from 2 to 10 miles, to suit all abilities.

Buy 50 Walks in the Lake District from the AA Amazon Shop. 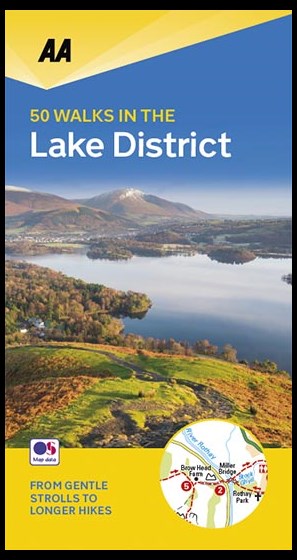 Walking from the honeypot of Bowness-on-Windermere on a busy summer weekend, it is hard to imagine that just above the lakeside bustle there is a world of quiet solitude and space. With relatively little effort, however, you can crest the heights of Brant Fell and enjoy a wonderful, lonely view out over Windermere to the Coniston fells, the Langdale Pikes and the mighty Fairfield.Bowness-on-WindermereFed by the high rainfall of the Lake District fells, via the rivers Brathay, Rothay and Troutbeck, Windermere is England's largest natural lake, stretching some 10.5 miles (16.9km) from Waterhead to Lakeside. It is up to 0.9 miles (1.45km) wide in places, and reaches a depth of 220ft (67m), so its ice-scoured bed is well below sea level. Overlooked by this walk, the privately owned Belle Isle is said to have been used since Roman times. Today this island is supplied by a little boat, which serves the 38-acre (15ha) estate. Belle Isle's interesting circular house, restored after extensive fire damage in 1996, was originally erected by Mr English in 1774. Apparently William Wordsworth credited Mr English with the honour of being the first man to settle in the Lake District for the sake of the scenery. There have been many more since.The main gateway and access point to the lake, Bowness-on-Windermere, is the most popular holiday destination in the Lake District. More than 10,000 boats are registered on the lake. Once the Oxenholme–Kendal–Windermere railway opened in 1847 the town developed rapidly. Windermere town grew around the station from what was once a small village called Birthwaite. The railway company named the station Windermere to attract trade, although it is some distance from the lake. (And since the lake was named first, and since 'mere' means 'lake' anyway, there is no need to call it 'Lake Windermere'.)In the late 19th century wealthy businessmen, principally from industrial towns in Lancashire, built luxurious residences overlooking the lake. Many of these are now hotels, while Brockhole is now the National Park Visitor Centre and Blackwell is owned by the Lakeland Arts Trust and open for visitors. The Belsfield Hotel, overlooking Bowness Bay, was bought in 1860 by Henry Schneider, the chairman of the prosperous Barrow Steelworks and Shipworks. Reputedly he left home each morning and boarded his steam yacht Esperance, taking breakfast whilst travelling down the lake to Lakeside. He then journeyed by steam train – he owned the railway and had his own private carriage – to the works in Barrow.

Quite apart from the natural beauty of the area, there is plenty to do and see around Bowness. The Steamboat Museum is currently undergoing a major rebuild, and should have reopened by the time this book is published. Above Bowness, just off the B5360, stands Blackwell, a truly beautiful house from the early 20th century. Blackwell embodies the principles of the Arts and Crafts Movement, a reaction against the advance of industrialisation and mechanisation. There's an excellent cafe and gift shop too.

Bowness-on-Windermere is inundated with cafes, inns, shops and restaurants. Conveniently located near the start and finish of the route, at the foot of Brantfell Road, is the Royal Oak. In the town centre, Monties café bar is an established favourite.

St Martin's Church, an impressive building surrounded by ancient yew trees, is the parish church of Bowness, built in 1483 and restored and enlarged in 1870. Undoubtedly the most interesting building in Bowness, albeit among many worthy contenders, it is well worth taking a look inside. Behind the church is the oldest area of Bowness, known as Lowside, an intriguing web of narrow streets among buildings of dark slate.

Buy 50 Walks in the Lake District from the AA Amazon Shop.