A Newlands Corner loop via Shere

Try this sample walk from the latest edition of 50 Walks in Surrey.

About 50 Walks in Surrey

Walking is one of Britain's favourite leisure activities, and this guide to Surrey features 50 mapped walks from 2 to 10 miles, to suit all abilities.

Buy 50 Walks in Surrey from the AA Amazon Shop. 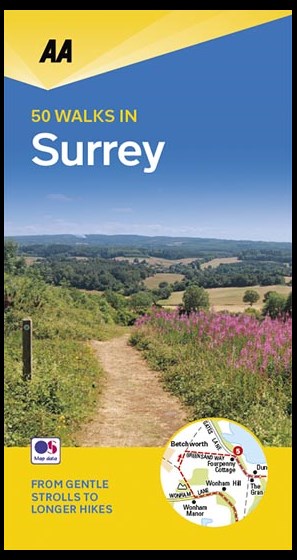 In an extraordinary episode redolent of one of her own crime novels, Agatha Christie dominated the British papers during the first two weeks of December, 1926. She never mentioned the affair in her autobiography, and the motive which fuelled 11 days of intense police and media activity has remained an enigma long after her death. Agatha Miller married Colonel Archie Christie late in 1914. After wartime service in the Royal Flying Corps, Archie returned to civilian life when their daughter was born, five years later. Agatha's first novel was published in the following year, and by the mid-1920s income from her books helped the couple to buy a home at Sunningdale in Berkshire. Newlands Corner mystery Material success masked fault lines in the couple's relationship, however. The war years could not have been easy, and Archie may have felt threatened by his wife's success. She put on weight after their daughter's birth, while he found consolation – and romance – on the golf course. On Friday 3 December 1926, there was a furious row as Archie told Agatha that he would be spending the weekend with his mistress, Nancy Neele. Divorce was inevitable. That night Agatha left her sleeping daughter and treasured dog, climbed into her bullnose Morris and disappeared into the night. The following morning the novelist's car was found abandoned by the chalk pit that you'll see in Water Lane, near the start of your walk. But Agatha Christie was gone. It was national news. While the police scoured southern England and questioned Archie on suspicion of murder, the Daily News offered a £100 reward for information. The story remained in the press, and on Sunday 12 December thousands of people converged on Newlands Corner to search for Agatha's body. Meanwhile, almost 24 hours after her disappearance, Agatha Christie had calmly booked into a Harrogate hotel under the assumed name of Teresa Neele. Despite the national hue and cry, ten days elapsed before the police located her. Archie was in the clear, deflecting reporters by explaining his wife had amnesia, and the couple fled to Abney Hall in Cheshire, home of Agatha's sister. This bizarre affair has been shrouded in mystery ever since. Christie herself refused even to discuss it, and, after her death there were unsuccessful attempts to suppress a film adaptation of the story. The unsolved mystery was featured on BBC television in 1997, and the programme included an appearance by author Jared Cade. His subsequent book claims that the entire episode was simply Christie's attempt to embarrass her husband and sabotage his weekend with his mistress. It is, at least, a convincing theory.

The mysterious Silent Pool on Shere Road is worth a visit, and offers another opportunity for a walk. Legend says that King John abducted a woodcutter's daughter who was forced into the deep water and drowned, and some say that the maiden's ghost can be seen here at midnight.

The all-year-round kiosk in Newlands Corner car park sells hot and cold drinks and snacks, including burgers, chips, soup, salad, rolls and cakes. In Shere, try The William Bray or The White Horse (a Chef and Brewer pub), both with fine menus.

At St James' Church in Shere look for two small openings in the north wall of the chancel and a sealed archway; these are all that remain of a tiny cell. In 1329 local girl Christine Carpenter was given permission to be enclosed in this cell as an anchorite, where she could see the altar and receive Communion through the holes. She emerged briefly in 1332, but was soon placed back in on the Bishop's orders, to learn 'how nefarious was her committed sin'.

Buy 50 Walks in Surrey from the AA Amazon Shop.