50 Walks in the Peak District

Try this sample walk from the latest edition of 50 Walks in the Peak District.

About 50 Walks in the Peak District

Walking is one of Britain's favourite leisure activities, and this guide to the Peak District features 50 mapped walks from 2 to 10 miles, to suit all abilities.

Buy 50 Walks in the Peak District from the AA Amazon Shop. 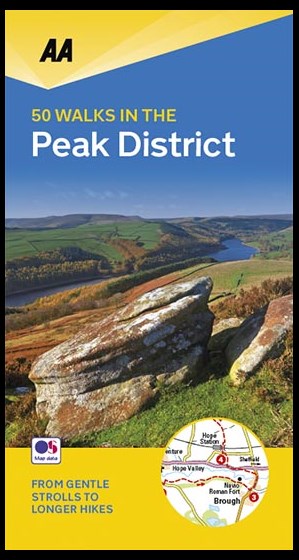 Around 130 years ago, as the demands of Manchester's industrial population grew, the need to supply the city with safe and sufficient drinking water became paramount. Inevitably the planners turned their attentions towards the Pennines, that formidable upland barrier that soaks up so much of northern England's rain. Before long a series of reservoirs sprang up across the hills that separated urban Lancashire and Yorkshire and, just as the counties' rivers and streams had previously been harnessed for the mills, now the moorlands were drained and the tiny Pennine valleys dammed to create artificial lakes. The first of the four reservoirs collectively known as Dovestones was Yeoman Hey, constructed in 1880, and followed by Greenfield in 1902. When Chew Reservoir was built, 10 years later, it was the highest in Britain at around 1,600ft (488m). Dovestone Reservoir is the largest of the group and was completed in 1967.  When Yeoman Hey was being planned, local mill owners were concerned that it would deprive them of essential water, so a tunnel was constructed from the confluence of Birchen Clough and Holme Clough to the Ashway Gap. This ensured water would continue flowing into Greenfield Brook, down a stepped weir, for use in the mills.  Four reservoirs Today the four vital reservoirs supply drinking water to Oldham and communities in the Tame Valley. They are owned and run by United Utilities, who provide water to nearly 3 million homes in Northwest England. In total the water company owns over 140,850 acres (57,000ha) of water-gathering land and reservoirs throughout the Peak District, Lake District and West Pennines.   Recreation United Utilities actively encourages certain types of recreation around its reservoirs. Swimming is forbidden, because of the deep water and outlet pipes that can cause dangerous undercurrents, but sailing and windsurfing take place on Dovestone Reservoir, with regular races taking place. On the adjoining hillside there are two orienteering routes –look out for the small posts with helpful coloured markings and numbers. The popular 2.5-mile (4km) track around the shore of Dovestone Reservoir has been made suitable for wheelchair users, while the numerous paths and bridleways that explore the surrounding moors include the Oldham Way. The course of this superb circular, 40-mile (64.3km) walking route around the borough of Oldham can be seen as you set off from Dovestone Reservoir. It runs high and straight across the hillside to the south, on the route of a former steam tramway that was built 100 years ago to aid the construction of Chew Reservoir.

A visit to the Saddleworth Museum and Art Gallery, which is located just 2.5 miles (4km) from Dovestones on the High Street in Uppermill, is highly recommended. The former canalside woollen mill is stuffed full of curiosities and intriguing snippets of local history –from farming to brass bands, Roman soldiers to weaving mills. It's open every afternoon and includes hands-on exhibits for children and informative displays.

On sunny weekends the occasional ice cream van is always a welcome addition to the Dovestones car park. Otherwise, the nearest place for refreshments is a pub called The Clarence, about a mile (1.6km) away in Greenfield, which serves food daily. For more choice you'll have to try the cafes and pubs of nearby Uppermill.

When walking from Dovestones to Chew Reservoir, look up high to Wimberry Rocks on your right. By tilting your head slightly to the right, you should be able to make out the famous Indian's Head. Later, as you stand on the edge of the moors above Dovestone Reservoir, taking in the splendid panorama westwards, a small but distinctively pointed hill a mile (1.6km) beyond the reservoir (and topped by a war memorial) tends to catch the eye. It's known as Pots and Pans and its odd-shaped rocks contain weathered holes that were once rumoured to have been specially deepened to hold the wine of well-to-do grouse shooters!

Buy 50 Walks in the Peak District from the AA Amazon Shop.