There's no mistaking this distinctive shape 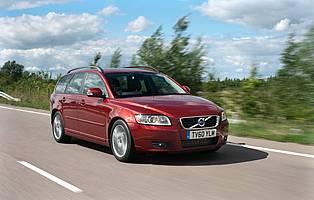 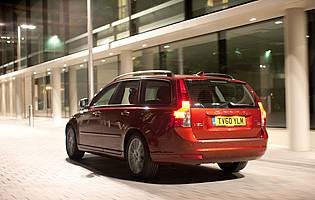 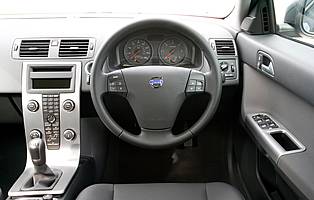 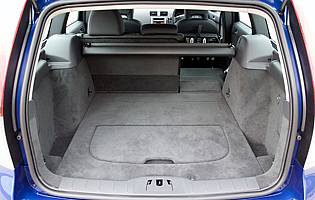 Plugging a gap in the market between family hatch and compact people carrier, Volvo's V50 estate offers buyers a conventional car with a bit more space and versatility than five-door runabout. And, in eco-centric DRIVe trim, the V50 boasts a tax-dodging CO2 rating and wallet-friendly economy but without the hint of any compromise along the way.

The V50 wagon and its saloon twin, the S40, have been popular models for Volvo. Recent years have seen a steady but subtle range of cosmetic and mechanical tweaks to keep the range fresh and competitive. Lately this policy extended to sharpening up the cars' green credentials in the shape of DRIVe-branded models.

And while this sub brand has now extended to Volvo's entire range, it's the smaller cars - V50 included - which offer buyers the most in terms of efficiencies and financial savings.

In every respect the V50 DRIVe is a regular compact estate that can be viewed as an upgrade form a family hatch or a modestly-sized lifestyle alternative to people carriers and 'soft-roaders'. Packing a 1.6-litre, 115 horsepower diesel motor, this V50 boasts a combined fuel economy figure of 74.3mph and an impressive 99g/km CO2 rating.

The financial rewards for running such a car are obvious, but the reality with some rivals can be less than enjoyable. The harsh ride and stripped out feeling of the cabin thanks to eco-spec tyres and the desire to save weight respectively isn't present in the Volvo. The experience is more akin to any other small Volvo, which means a well-judged ride, premium-level build quality and space for four.

Our verdict on the Volvo V50 DRIVe SE

Far from being a compromise thanks to its eco-credentials, Volvo's V50 DRIVe offers buyers the same polished ownership experience of any car from the Swedish firm. That you're in possession of a car exempt from select congestion charges and records supermini-high levels of fuel economy should be sufficient evidence to convince anyone who believes you can't have your cake and eat it.

As a premium car, a Volvo is always likely to cost more to insure than the average family estate or hatch, but the large selection of petrol and diesel engines ranging from humble to powerful means that insurance issues can be worked around. The frugal DRIVe variant promises low consumption and a congestion charge-busting CO2 rating

Despite the V50's versatile, estate car shape, legroom for the rear passengers is surprisingly sparse. It's partly due to the chunky front seats but not enough to be considered cramped. Taller drivers might also find headroom a little tight. In contrast, the boot is spacious and well proportioned to take bulkier items with ease. In terms of practicality the V50 has excellent towing credentials and makes a formidable load carrier.

Mounted on a 'floating' centre console the sound system and heating controls are simple and clearly labeled and the minimalist design stops the interior feeling cluttered. The switchgear itself is sturdy with strong and well-placed stalks controlling the essential functions. The dials, although not as snazzy as some of the Volvo range, are clear and well presented.

In the real world the V50 is as comfortable as any big luxury car. The ride is quiet refined, and the car easily copes with urban roads and their imperfections. The V50 is geared toward the comfort of its occupants to good effect, although those in the back have to cope with only modest amounts of leg and headroom.

The V50 comes complete with an alarm, immobiliser and remote central locking. Automatic opening and closing of the windows and sunroof are an additional bonus as is time-delayed lighting to guide you to the front door.

It's no surprise to learn that the V50 is brimming with active and passive safety equipment as standard, and that even more is available at extra cost. Isofix points have been made standard in the rear seats. A full compliment of airbags, whiplash protection, dynamic stability traction control and electronic brake force distribution are standard.

The V50's responsive handling might come as something of a surprise at first, but a pleasant one. In truth, the car's basic underpinnings can be traced back to Ford roots when Volvo was part of the Blue Oval family. The DRIVe variant delivers a pleasingly plush and refined performance, while the diesel motor is hushed in all but the extremes of performance and is never short of puff when it matters. The engine's stop-start function proves reliable and unobtrusive in action.

Volvo's V50 is a family friendly car, with touches such as the revolving armrest and cup holder assembly and copious storage furthering Volvo's reputation for building versatile cars. Its intrinsic safety, hardwearing interior and pleasant, unobtrusive styling add to the family appeal, as does the sensible balance between its carrying capacity and compact footprint.

The V50 is targeted at a younger audience than the larger vehicles in the Volvo range, and it's not inconceivable that a novice driver might be interested. Easy to use main controls and, in DRIVe guise at least, modest power outputs make the act of driving a straightforward one.

With Volvo's past reputation built on the success of solidly built and reliable estates, the compact V50 is a little different. There are, however, no squeaks or groans and the fittings should easily withstand torture by child. More of a lifestyle hatch than full-blown load-lugger, the V50 is pitched at a more youthful end of the market.

With its five doors and low sills it's relatively easy to gain access to the V50's cabin. Front seat occupants fare better than those in the back as the entry aperture for the latter is quite small. Central locking is via remote control fob, although keyless entry is available while operating the tailgate is a straightforward affair.

The standard arrangement will be ample for most in terms of sound quality, and features an auxiliary MP3 connection. The option of a high performance set-up also exists. Controlled by knobs integrated into the floating centre console, the system is intuitive - and wheel-mounted controls are also included across the range. Funky Volvo graphics on the display are also a nice touch but the minor controls could be better.

Bold and light exterior colours work best, as the V50 has never been viewed as one of regular, ultra-conservative premium offerings. Inside it's the same story, with light coloured trim helping to lift the car's cabin ambience.

Rear visibility is good and there's little to bump behind the rear windscreen to aid positioning the car. Where fitted, parking sensors are a great help, although the V50's compact design shouldn't pose any problems.

Audi A4 Avant Booted version of Audi's popular A4 is solid, stylish and popular