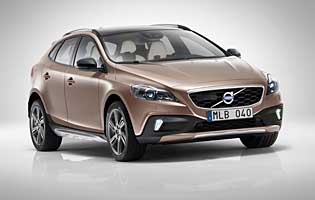 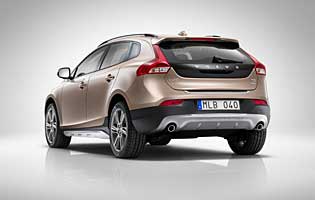 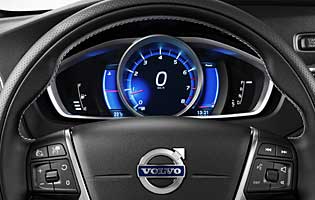 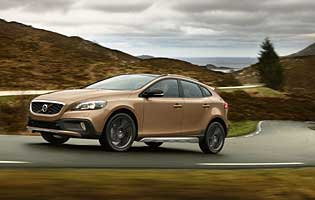 With practicality always in mind, Volvo has turned a further new model on the back of its recently-introduced V40 with the introduction of the V40 Cross Country. Not to be confused with the XC models which are SUVs, the V40 Cross Country remains a family hatchback but with an added element of off-road ability.

Arguably the most crucial model for Volvo, the V40 has the potential to be the best seller in the range as it takes on both conventional C-segment hatchbacks but also some of the crossover models that have become ever more popular in recent years. To that end Volvo has spun off an additional model from the V40 in the shape of the Cross Country.

The majority of the changes are visual rather than mechanical, although all V40 Cross Country models gain a ride height raised by 40mm. On the outside there are body protection plates at the front, the rear and along the sills, finished in matte silver while the front and rear also gain black plastic bumpers rather than the body-coloured versions on the standard V40 model. Inside there are contrast-coloured panels on the seats and an increase in the amount of storage areas.

Mechanically the V40 Cross Country comes with a choice of two petrol and three diesel engines, all of which are shared with the regular V40 model. The top petrol T5 model comes with al-wheel drive as standard and also hill decent control, something which isn't available on any other version.

The V40 in Cross Country guise brings a useful visual boost, added utility and a little more ruggedness in an attractive package. The T5 version offers even more appeal thanks to its useful performance, but at a price. Ideally Volvo would team the four-wheel drive option with an efficient but powerful diesel, and this may happen with sufficient buyer interest.

Almost any of the other engine options in the V40 Cross Country would provide reasonable running costs in terms of fuel economy and vehicle excise duty, but the T5 model is comfortably the most expensive to buy and the most thirsty.

The Cross Country has the same hatchback-cum-estate rear end which suits its practical intentions. The Cross Country also benefits from a more practical approach in the cabin than the standard car, with extra storage cubbies, bins and even a built-in ice scraper with its own drip tray.

The V40 Cross Country shares much of its layout with the rest of the Volvo range which is no bad thing. The instruments are attractive and clear, while the floating centre console is clearly labelled and the minimalist design stops the interior feeling cluttered. The switchgear itself is sturdy with strong and well-placed stalks controlling the essential functions.

As always with Volvos the seats are accommodating and supportive, the ride is quiet and luxuriant even in this sportiest model in the range. Climate control comes as standard across the range and both driver and front passenger can fine-tune their position with a fully adjustable steering column and height adjustable front seats with lumbar support.

Naturally, the V40 comes complete with an alarm, immobiliser and remote central locking. Automatic opening and closing of the windows and sunroof are an additional bonus as is time-delayed lighting to guide you to the front door..

Unsurprisingly the Cross Country is packed with safety kit. A full compliment of airbags, whiplash protection, dynamic stability traction control and electronic brake force distribution are all standard. Features such as BLIS, which uses a rear facing camera and warning light to warn of vehicles in the car's blind-spot is available as an option as are swivelling headlamps.

It's likely to be the least popular option in the UK but the T5 version of the Cross Country has a lot going for it. The torquey and responsive engine is both quiet when cruising but powerful and tractable when required, and provides an interesting five-cylinder rumble in the process. The transmission works well in both automatic and manual mode although there are no paddles behind the wheel.

The family market is exactly where the V40 Cross Country is aimed, and it has all the right ingredients. There's enough space in the rear to suit tall teenagers, the cabin itself will stand up to the kind of tough use that only children can bring and the in-car entertainment should keep everyone satisfied.

The Cross Country would offer a relatively easy introduction to motoring for an inexperienced driver, thanks to its straightforward driving experience and suer-friendly cabin. However its expense and performance would put it out of reach for most new drivers.

There has always been a strong air of quality with Volvos and the V40 Cross Country continues in that theme with impressive materials and a high level of fit and finish. The brand has also come a long way in terms of image, with thoroughly modern design and more appeal than just safety.

There are no surprises here; with a five-door only configuration, generous apertures and a large tailgate, loading up the V40 Cross Country with people and luggage is pleasingly hassle-free.

The Cross Country uses the same system as found in the regular V40, which means a bright and clear screen mounted at the top of the dashboard and simple controls. USB and Bluetooth connectivity are standard while options like DAB increase the choice still further.

The extra body trim fitted to the V40 Cross Country gives it a tougher look, and so lighter colours tend to look better by contrasting with the grey plastic. Additionally it is available in an appealing bronze that is unique to the model. The standard V40 has an appealing cabin already but in Cross Country trim there are contrasting panels and stitching on the seats that give an even further lift to the cabin.

The V40 Cross Country has a relatively shallow rear window which restricts rear visibility while rear parking sensors are an option across the range, both of which make parking a little more difficult than it should be in a car of this size. However the power steering is finger-light at low speeds and the view through the mirrors is good.