Visual changes for the new Sharan are limited 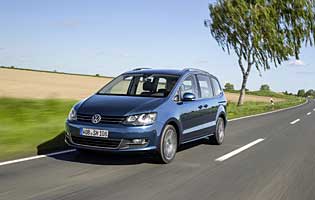 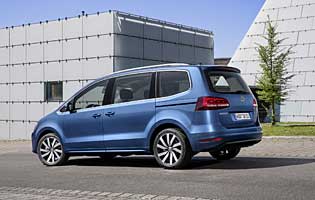 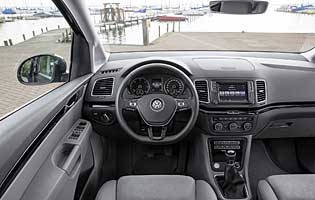 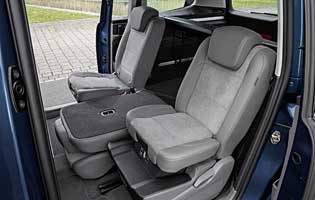 The seven-seat MPV limelight in the Volkswagen Group is usually taken by the largely identical Seat Alhambra, but the parent company offers its own version in the shape of the Sharan. A mild makeover for 2015 brings with it some visual changes and equipment upgrades but the key change is updated engines that comply with the latest European emissions regulations.

As with its Spanish cousin, the Sharan sticks to a very simple recipe in order to offer seven-seat versatility. The exterior is a straightforward one-box design with a pair of sliding doors on each side, a big tailgate and lots of permutations within. The facelift brings with it restyled bumpers and lights plus new alloy wheel options.

Available with the theoretically efficient 1.4-litre TSI unit and three versions of the 2.0-litre TDI unit, all the Sharan engine offerings now comply with the latest EU6 emission regulations and as a result offer lower CO2 emissions across the board. Transmission options are a six-speed manual or the popular six-speed dual-clutch DSG offering.

The clever and useful sliding side doors are standard on all models, as is the highly flexible seating arrangement. The second and third rows of seats are all individual and so can be folded independently of each other. The second row can also slide forwards and backwards independently, giving the option of adjusting the balance between luggage and passenger space.

New equipment featuring on the updated Sharan includes the latest generation touchscreen infotainment system seen on other Volkswagen products which includes smartphone mirroring software such as Apple CarPlay. Safety features such as Post Collision Braking and adaptive cruise control are also available for the first time.

Our verdict on the Volkswagen Sharan SE 2.0 TDI

Sensible, immensely practical and easy to drive, the Volkswagen Sharan offers a compelling buying case for anyone needing this much space and versatility. The improvements over the outgoing version may be small but they all add up, and in particular the extra equipment and better efficiency will be welcomed. The biggest issue for the Sharan is the cheaper Seat, although the Sharan does have the alluring VW roundel.

Volkswagen models are under-cut in price by some rivals, not least the Seat Alhambra but the flip side is the strong residual values when it's time to sell. All the engine offerings are more efficient with the 2.0-litre TDI units offering the best economy. Insurance groupings should be broadly similar to key rivals too.

A very capacious body with a broad scope for rearrangement means the Sharan scores highly for practicality. The seats can be folded in many configurations to offer different seating and luggage combinations. Individual seats can also be moved to provide greater legroom for those behind. Unlike some part-time seven-seaters, the Sharan is capable of accepting adults comfortably in its additional row. In the front, storage options are plentiful, with an additional glove box in the central dash-top.

The dashboard layout is refreshingly easy to use with an intuitive layout offering large, easy to reach and locate buttons both on the centre console and the steering wheel The instrument binnacle itself is neatly styled and easy to read, with a crisp white-on-black information display.

Happily the Sharan's ride quality is very good over a variety of surfaces while engine and road noise are well insulated. Contoured seats for all seven passengers aid comfort and now three-zone climate control is standard equipment on all models.

Keyless entry is available to compliment the basic alarm and immobiliser system. Inside, lockable storage is a bonus, and a removable rear luggage cover is available to keep boot stored items out of sight.

Seven airbags, including one for the driver's knee and Isofix child seat mounting points with a Top Tether system in the second and third row will appease parents. Belt tensioners are also available for the second row of seats, accompanying the standard application in the front. Parents can opt for a seatbelt warning system that gives a visual display of who's latched in. Power sliding doors boast an anti-pinch feature and ESP is standard.

Even though it is a large vehicle the Sharan always behaves with a sense of calm and decorum. The 2.0-litre diesel unit pulls strongly and without fuss, while the excellent DSG gearbox makes for easy city driving as well as semi-manual control when required. Although it is far from a giant hot hatch, the Sharan responds well to more vigorous driving with surprisingly little body roll.

The Sharan is potentially the perfect family car if five seats aren't enough. The sliding doors and practical interior add to the family appeal and it is a car capable of growing with families too. Sensible running costs should also prove attractive.

The Sharan makes an unlikely choice as a first car, being better suited to families or professional use such as taxi driving.

Volkswagen's reputation for building strong, reliable and well finished cars is excellent and the Sharan is unlikely to do this any damage. Impeccably put together inside and out, it has a real feeling of solidity. Although it still enjoys the aura of quality that comes with owning a Volkswagen it has less appeal than a Golf or a Passat because of its more utilitarian bias.

The sliding rear doors, which can be upgraded to powered versions if required, take accessibility to another level in the Sharan, offering a huge portal and allowing entry and exit from tighter spaces. The second row of seats has been designed to fold forward a good distance with minimal effort, aiding access to the third row. The boot door is tall and gives a huge aperture, although it is essential to park a little further forward away from obstacles in car parks to ensure access.

All Sharans now get the latest touchscreen system with improved graphics and response times, as well as increased sophistication. The satellite navigation is more responsive and has more illustrative graphics, while the addition of smartphone integration is useful. Bluetooth is also standard on all models.

With its relatively plain exterior sombre colours can leave the Sharan looking almost invisible. It is better suited to slightly brighter shades such as blues and reds. On the inside there's a pleasing choice of shades, and while the lighter offerings have more visual appeal they may not hide the scars of family life quite so well.

Although the A-pillars restrict front visibility through corners to a degree, visibility around the body poses few problems. The Sharan is a reasonably long vehicle but its uniform shape makes it easy to place. Volkswagen has developed its automated parking system further to allow it to slot the car into spaces at right angles, as well as parallel park.