Dark elements at the front instantly mark out latest version 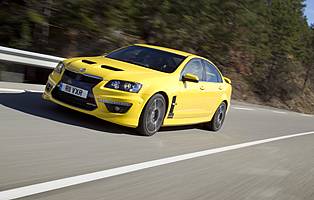 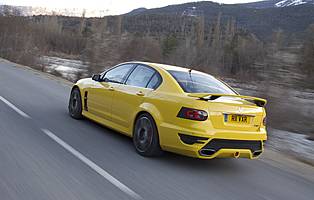 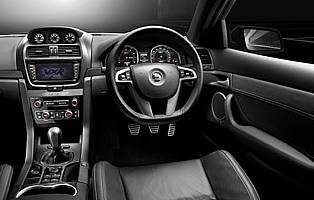 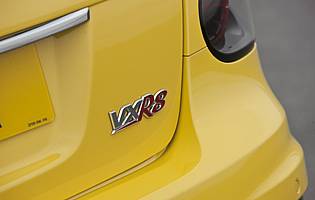 Vauxhall's brand-shifting VXR8 sports saloon has been a feature on price lists since 2007, and now the Australian-bred beast has been further enhanced inside and out. Two versions are available together with new bodystyles to special order, but the core appeal remains high performance with a bargain price tag.

Despite the Vauxhall Griffin proudly displayed on the nose, the VXR8 is a car that owes much to its Australian counterpart from Holden also under the GM wing. This latest version sticks to the tried and tested recipe of a large capacity V8 petrol engine up front, rear-wheel drive and lots of space in between. Although less sophisticated than more expensive rivals, each one adds more refinement and luxury as well as increased performance.

The most obvious change to the VXR8 is the more aggressive exterior, particularly the dark front grille now surrounded by LED daytime running lights and large intake vents below them. The rear has a similar contrasting theme with dark-coloured elements to the spoiler, all of which are marked out in particular when finished in a light body colour.

Power comes from a 6.2-litre naturally aspirated petrol engine, similar to those used in the Corvette sports car and in racing cars such is its flexibility and huge torque output. Although unchanged for the latest VXR8, a revised six-speed manual gearbox is offered alongside the existing six-speed automatic, both of which drive the rear wheels through a limited slip differential. GTS models also gain a new Magnetic Ride system that uses electronically-controlled dampers to provide both better handling and improved ride comfort.

Inside the VXR8 gains a number of upgrades, particularly in top-spec GTS guise. 20-inch wheels, launch control and tyre pressure monitoring are all standard, as well as a new driver interface system that offers the enthusiast a wealth of extra data - including drift angles, lap times and data logging.

Our verdict on the Vauxhall VXR8 GTS auto

A few choice updates have improved the VXR8 in terms of finish and equipment levels which help to bring it closer to premium rivals. However its strongest points remain the epic performance and value for money. Anyone willing to look beyond the German default choices will find a great deal to like in the VXR8.

As you would expect, the VXR8 is a pretty spacious vehicle. Cabin space is generous up front and rear seat passengers also fare well. At the rear the car's boot is a good size, and access is straightforward. Inside the car there are plenty of storage options for mobile phones, maps and the like.

It's standard stuff in the VXR8, which is always good in a car capable of serious speeds - you don't want any unnecessary distractions after all. The main dials and supplementary controls in the centre console are clear and intuitive respectively.

Greeting you as you enter the cabin are the VXR8's generously proportioned front seats. Wide and supportive, they do a fine job of keeping you in place and making long motorway journeys comfortable. Elsewhere, cabin space is pretty good and rear seat occupants also get to experience supportive seats. The only downside is the car's road and tyre noise, which can be a little intrusive at high speed or on poorly surfaced roads.

Although hardly an inconspicuous car any thief targeting the VXR8 will have to live with its head-turning qualities. Factor in the car's exclusivity and it's fair to think that most opportunists will leave it well alone. Thankfully the car's defenses are more sophisticated, what with the usual central locking plus alarm and immobiliser making an appearance.

Like all big, premium saloons, the VXR8 is equipped with the usual safety features. From airbags to ABS and electronic stability control - a vital component considering the car's performance - you can feel safe in the big Vauxhall.

The VXR8's powerful V8 motor, traditional rear-wheel drive layout and no-fuss handling characteristics make the big Vauxhall hugely entertaining to drive. A real enthusiasts' car, the VXR8 demands concentration at high speed and prefers wide sweeping turns to bumpy B-roads. The engine sounds great whatever your speed, plus the steering and brakes both deliver positive and direct responses to your inputs. At more run of the mill speeds the car is easy to drive and is quite happy to assume the role of family saloon, although as you'd expect the car's ride quite firm.

The classic large saloon template means that the VXR8 makes a surprisingly good family car. There is plenty of space front and rear, although the back seat is ideally shaped for two rather than three people. The boot is also very large, and most children would be happy to ride in a car as quick and as rare as the VXR8.

Premium-chasing brands such as Vauxhall are squeezing the quality gap, and a decent improvement over the outgoing model is welcome. It still has a little way to go, but a car costing so much less is inevitably offer a little less in this department. Although the Vauxhall badge has low-key performance kudos, the VXR8 itself has genuine sporting credentials and will appeal to an enthusiast market.

GTS models have a high-specification audio system with USB and MP3-player connectivity, Bluetooth and satellite navigation. The touch-screen system works well and the sound reproduction is of a high standard, although arguably the engine provides even better sounds.

The VXR8 is clearly an extrovert, which makes recommending the bright red exterior colour option that bit easier. However, if you don't want everyone to know what you're driving, more subdued colours are available. The big Vauxhall's interior is more conservative, also. Save for the bright stitching on the leather seats the ambience is actually quite sombre.

The VXR8 is a big car, but with the help of good-size mirrors plus the parking sensors you shouldn't have a problem. The car's turning circle is surprisingly good, and the steering is light at low speeds.