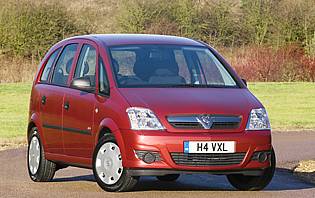 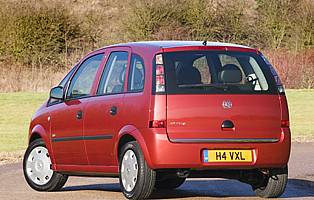 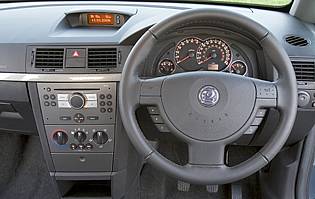 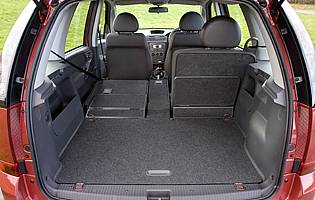 Contrary to popular belief, compact people carriers do come in all shapes and sizes. Vauxhall's Meriva is probably the most straightforward of the bunch, yet its tall, short stance hides a spacious cabin and load space. It might not be the most glamorous model out there despite a mild 2006-model year refresh, but looks can be deceiving.

Renault's Modus might be more glamorous and Citroen's Xsara Picasso bigger, but Vauxhall's Meriva compact people carrier does a good job of combining the best of both these high profile rivals. A full five seater - or four with the rear bench adjusted - the Meriva is more than just a tall hatchback.

Along with the company's popular Zafira people carrier, Vauxhall's Meriva has won a lot of favour throughout Europe. So much so that this pairing often dominates the 'one box' MPV category. It's easy to see why the Meriva has done so well, as competitive pricing, a flexible interior and good road manners are the car's main plus points.

For growing families torn between buying a conventional hatchback and people carrier, the Meriva makes a lot of sense. From the outside it doesn't look that big, but from the inside it rivals regular cars for space and versatility. The Meriva concept has been occasionally accused of being dull though, which is largely a product of its appearance. The 2006 refresh has helped, but the inclusion of a performance VXR variant mirroring the bigger Zafira VXR certainly won't harm its image.

Critics will have problems with the use of the VXR sub brand in conjunction with such a mainstream motor, but Vauxhall engineers have done a good job of ensuring that 180 horsepower in such a small, tall car doesn't cause a problem. In fact, performance is brisk, assured and fun. It's no hot hatch, but it will put a smile on your face.

Our verdict on the Vauxhall Meriva Club 1.6

For all its conservative leanings - its driving manners and styling - Vauxhall's Meriva is a competent and pleasant car to own and drive. Behind its modest looks hides a cabin of sensible proportions, a clever folding seat mechanism and modest running costs. For a growing family on a budget, there's little more you could ask for. The refresh has taken care of the looks and performance freaks now have something to challenge the 'warm' performance hatch brigade with.

The Meriva doesn't cost a fortune to buy - assuming you haven't gone for the racy VXR variant. And, like a something from Ford, general running costs should be anything but a burden. Fuel economy across the range is also agreeable, whether the engine is petrol or diesel. Only going mad with the options catalogue at the point of sale or opting for the pricey and thirsty VXR will your bank balance feel any real pressure.

This is one area where the Meriva scores over regular hatchbacks of a similar size. Taller than a conventional car, the Meriva boasts plenty of head and legroom. The rear seats are also commodious, although large adults might want a little more legroom. The seats themselves require only modest effort to fold and, crucially, they fold flat. Another trick changes the rear configuration from three to two seats by hiding the centre section and sliding the main chairs together - great if carrying only adults. At the rear, the boot is wide and flat, while the higher than average load lip makes removing heavy items easy.

The Mervia delivers no surprises here, as everything is easy to hand and works as you'd expect it to. The main instruments are easy to ready and centre console controls are located high up and with easy reach of both front seat occupants. The split display for the audio unit and, where fitted, sat-nav option is conveniently near eye-level. Alas, the controls for the audio unit and sat-nav sometimes require more than just one button press - necessitating you take your eyes of the road for a second.

In regular specification, the Meriva feels compliant and is rarely caught out by poorly surfaced roads. All the seats feel supportive but not to the point of being too firm, while engine noise is pleasingly low. Only an above average amount of wind noise at motorway speeds finds its way into the cabin. The higher than average seating positions mean that getting in and out of the car is easy.

Hardly a car thieves will be actively seeking out, the Meriva comes with the all the basics to keep it safe and secure. Remote central locking is also convenient if you're carrying shopping bags when approaching the car. At the rear, there's a sturdy parcel shelf that should keep prying eyes at bay. You might want to fit a visible deterrent, such as a steering lock, for added peace of mind.

In a departure from Vauxhall's usual generous nature, safety kit on the Meriva is modest at best. Front airbags are, thankfully, standard, but you'll have to pick the right model or select an option if you want side and curtain airbags. To ease the financial pain, a bundle is offered - including the likes of ESP and a few other choice items. Being a family car, two rear Isofix mounting points are standard, though.

For a relatively tall car with a short wheelbase, the Meriva handles in a safe and predictable manner. All the main controls offer a considerable amount of assistance, which might not appeal to the keen driver. All the different variants perform well, with the middle order petrol models striking a good balance between refinement and pace. The VXR model, predictably, offers a firmer ride and a more performance-oriented experience. It's certainly quick, but the heavily assisted steering doesn't give you much confidence at speed.

As an alternative to conventional, mid-size people carriers and traditional family hatchbacks, the Meriva is a surprisingly decent alternative. Anyone with a small family is unlikely to need huge amounts of rear legroom anyway, which is something the Meriva doesn't have. In other respects the car performs exceptionally well: the boot is big, the rear seats can be folded flat, a rear sound system is optional to keep the little ones quiet and the cabin trim looks durable.

There's little negative to say about the Meriva in the context of a first car purchase. Cost issues aside, which should prove no more than average for the class, the car is easy to drive and park, boasts a good driving position and, VXR apart, isn't quick enough to get the driver into serious trouble.

Vauxhall, as a brand, has come a long way in recent years. The versatile Zafira has done wonders in the compact MPV market, while improvements to the much-maligned Vectra and Astra ranges have boosted those cars' standings to new heights. Quietly positioning itself as a brand of choice and no longer one solely connected to the company car market, Vauxhall is starting to make its presence felt in the wider car buying community. Thankfully, build quality has improved along with the firm's increased brand awareness.

Wide opening doors at the front and a seating position that requires you to slide across rather than up and in, all make front seat access easy. Exiting the car is no less of a hardship. At the rear the door aperture is a little smaller, but this shouldn't pose a problem for children and the average adult. At the rear the tailgate opens high to reveal a wide load space with a thigh-height load lip. While good, the tailgate itself does require a hefty pull to shut.

The standard unit is easy to use and delivers more than acceptable sound quality. The split display mounted high on the fascia reduces distractions and the need to take your eyes of the road of lengthy periods of time. 2006-model year cars can be supplied with options once a feature of only luxury cars: Bluetooth handsfree telephone operation, roof-mounted DVD player and screen for rear passengers and an audio system with headphones, also for rear occupants.

Vauxhall has never been a company famous for offering cars in bright, outgoing colours, and the Meriva is no different. 'Sensible' solid colours dominate, although the slightly brighter metallic shades lend a welcome upmarket feel. The same is true inside, as the ambience is a conservative one. Dark plastics and fabrics prevail but at least they do look hard wearing, which is perfect for a family car.

Although not as small as you might think, the Meriva rarely causes a problem in this department. The lofty driving position combined with good, all-round vision helps when placing the car in a tight space. The power steering also makes it easy to park the Meriva, as do the good size external mirrors and optional rear parking sensors.

Renault Modus Versatile Modus is more stylish, and is also match for the Meriva's practical side