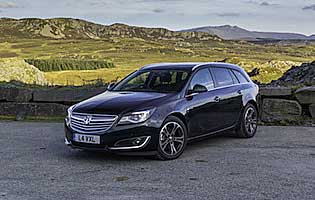 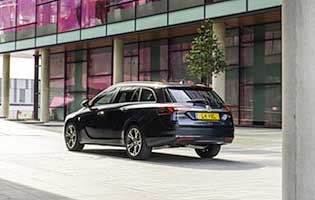 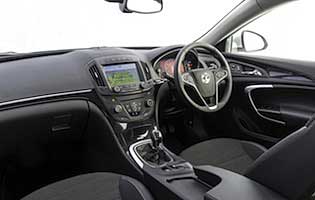 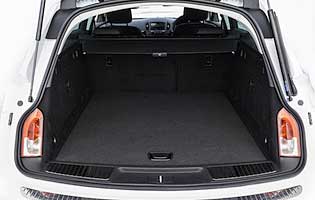 The mid-size car market might not be as exciting as the flourishing lifestyle SUV sector, but with its subtle visual changes and more extensive ones under the skin, Vauxhall has injected some welcome sparkle into its mainstream Insignia offering. And in Sports Tourer estate guise the car continues to boast a level of practicality to rival those more trendy SUV alternatives.

With its sharp, executive styling designed to compete at a more premium level than its predecessor and mainstream rival, this refreshed Insignia can be had in hatch, saloon and estate bodystyles. Tested here in estate guise, the promises to be the workhorse of the range.

With an increased focus on making hi-tech safety systems more widely available, boosting the perceived and actual level of refinement in the car's cabin and overhauling the engine line up to reduce emissions and fuel consumption, there's a considerable focus on affordability - an important attribute likely to appeal to business users.

Along with subtle but welcome improvement to the car's exterior, the Insignia's cabin has also been overhauled. Gone is the sea of buttons that used to confront drivers, replaced by fewer physical controls and a greater emphasis on different sized touchscreens depending on the model chosen to access everything from basic audio to detailed navigation functions. There are also claims of improved quality materials in the cabin.

However, of equal significance is the news that the car's ride and handling package has been polished, while the engine range - both petrol and diesel units - has been significantly overhauled. The latter will be of considerable interest to cost-conscious business users, as in 2.0-litre guise a tax-busting sub 100g/km CO2 rating will impact positively on the finances of both individuals and companies.

With its refreshed looks inside and out plus polished driving manners and more frugal choice of engines, this heavily revised Insignia is set to do battle for a few more years. In workhorse Sports Tourer guise, the car offers buyers a pleasing blend of practicality and style. It's no lifestyle SUV rival, but if you're not a fan of high-rise faux 4x4s, it easily doubles as a refined, affordable and presentable business class holdall.

Vauxhall makes numerous bold claims for the frugal nature of its revised Insignia range. In reality, assuming you focus on the improved diesel variants, you can expect to pay less tax thanks to lower CO2 ratings plus pay less at the pumps. The insignia is a high volume-selling car so don't expect record trade-in prices, though.

The estate version of the Insignia offers a better than average balance of practicality and versatility. Occupant access fore and aft is good, while access to the car's load space via the large tailgate is straightforward. In the cabin there's sufficient oddment storage space, while the boot offers fold flat rear seats and a flat floor to allow you to maximize the generous space available.

It's here you'll notice the biggest changes. With a choice of navigation options and a sliding scale of screen sizes, access to the car's infotainment features is now much easier and the sea of buttons in the old car have thankfully gone. There's also two types of main dial displays; all digital, clearer than an analogue option and capable of displaying a wealth of information. As a package the changes are most welcome.

With a high degree of refinement the Insignia is an inherently comfortable car to travel in. As a high-speed cruiser it can rival the premium contenders, a market Vauxhall is keen to gain a stronger foothold. Road and wind noise present few problems for occupants, although larger wheel options can unsettle the car on poor quality urban roads.

The Insignia maintains a strong standard of security with remote central deadlocking, alarm and immobiliser. Covered storage in the front armrest and glovebox plus a sturdy rear load cover means valuables can easily be kept out of sight.

The basic safety proposition in the Insignia is a good one and compares well with the competition, thanks to the inclusion of plenty of airbags and a good spread of electronic stability systems. Factor in the likes of a traffic sign reader, adaptive headlights plus lane departure warning and you're also covered if you wish to explore the cost options list.

The Insignia Sports Tourer gives little impression of its size once you're behind the wheel and is capable of providing a responsive and involving driving experience. This can be tempered a little by steering that occasionally feels too light and disconnected when pushing on, but there's no doubting the overall quality of the car's chassis or the surefooted handling. Tested in 2.0-litre diesel guise, the new engine range is responsive, if a little gruff when extended - something that could prove frequent if fully loaded, and is happiest at a constant throttle, ensuring the motorway slog will be a relatively refined and effortless experience.

As you'd expect, the Insignia Sports Tourer easily doubles as a family holdall outside of office hours. Able to comfortably seat a growing family of five, it's an adaptable and stylish choice, although you might want to steer clear of leather upholstery if you have a young family for practical reasons.

Regardless of bodystle the Insignia isn't a vehicle targeted at the first time car buyer. More suitable models can be found elsewhere in the Vauxhall range for less money but that's not to say the Insignia isn't an easy car to drive. With light controls and good visibility it shouldn't present any major problems.

A more upmarket affair in terms of styling inside and out than its predecessor, this revised Insignia builds on the excellent reception earned by the smaller Astra. Material quality is good and build quality seems solid.

A well proportioned car, there are few issues with accessing the front or rear passenger sections of the Insignia. Front and rear headroom is also good, with adult passengers seeking refuge in the rear unlikely to feel uncomfortable. In estate form, the car's tailgate allows unhindered access to the generous size load area and the low, flat load floor is a boon when loading large or heavy items.

The cabin overhaul isn?t restricted to just upping the premium ambience, but also to improving front seat and driver ergonomics through the simplification of the Insignia's various controls. Out go most of the switchgear in favour of a touchscreen - a pleasingly large one if you opt for upmarket models and the options list. Boasting clear graphics but a sometimes displaying a slight lag when responding to inputs, it's still a huge improvement. As you'd expect, all the usual sources are available, including DAB radio.

The Insignia looks at its best in mid-tones such as greys or reds. The darker shades can reflect the light awkwardly, making it look less handsome. The large alloy wheels of the upper trim levels suit the bulky design better than some of the smaller wheel options and help disguise the extended proportions of the estate variant. The styling of the interior carries leather and bright trim accents well but there's still too much hard plastic on display.

Parking is reasonably straightforward thanks to good all-road visibility - even when looking through the Sport Tourer's rear window - and light yet accurate steering when at walking pace. The car's parking sensors take the pain out of the act, and the Insignia proves more agile than its size suggests.

BMW 3 Series Touring Remains a benchmark in the premium sector

Mazda 6 Polished and cost effective alternative to its German rivals