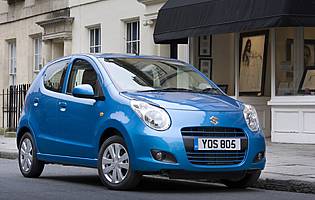 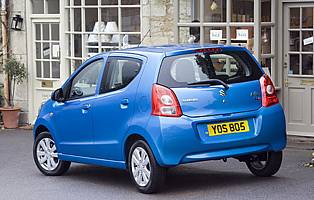 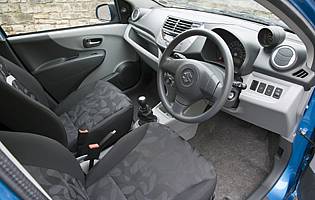 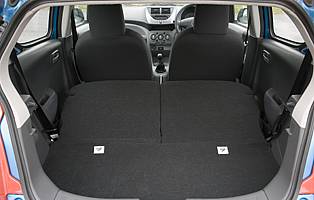 Suzuki's Alto city car is now in it seventh generation and is poised to take advantage of the increasing popularity of small and efficient cars. Designed with the youth market in mind, the latest version of the 30 year-old model utilises a fresh new interior and exterior design to attract a greater number of drivers.

Suzuki is making no bones about what is perceives as the target group for its new Alto model. Young drivers in the 18 to 30 year-old category are squarely in its sights. Strangely, the Alto is likely to be older than many of these buyers, having been launched in 1979 and first arriving in the UK in 1981, but it isn't showing its age thanks to an exterior overhaul more in keeping with current trends.

Originally conceived as a competitor in the tiny Japanese Kei class, not much has changed in terms of the Alto ethos. Like the original, the new version makes use of a three-cylinder engine and compact platform. The one-litre unit is available with either a five speed manual or, something of a rarity in its segment, a four-speed automatic gearbox in the UK.

It also features a five-door layout, making for easier access to the rear unlike some, but not all, of its competitors. With three trim levels available, the Alto aims to offer a model for a range of needs. In the top SZ4 trim level, interior equipment such as air-conditioning is complimented by a smarter exterior featuring fog lights and alloy wheels.

Built in India, the more sharply styled Alto is intended to carry on where the outgoing model, one that was increasing in popularity despite remaining a relatively rare sight, left off. Low emissions, frugal fuel consumption and a respectable degree of refinement make it capable of competing in a crowded and increasingly popular segment.

Our verdict on the Suzuki Alto SZ4

The recipe for a successful city car is a fairly simple one, and Suzuki has used the right ingredients in the correct measures. Adding its own flavourings in the shape of five doors and a fresh-faced exterior means the Alto is able to offer something a little different to customers. In a market where it can be hard to choose between equally adept competitors, this should stand it in good stead.

An excellent choice for drivers on a budget, the Alto offers a good deal for a relatively small investment. Extremely low insurance groupings, impressive real world mpg and all round inexpensive running costs mean it can be operated on a shoestring.

A tall body means there are no problems with headroom but rear legroom is in short supply, ruling out comfortable longer journeys for most adults in the despite the five doors. The SZ4 model benefits from a 50/50 split folding rear bench unlike the other versions. The boot is wide and longer than some of its rivals, however, the spare wheel takes up a lot of space underneath causing it to be shallow. Upfront the glovebox is noticeable by its absence and door pockets are thin.

The SZ4 benefits from the addition of a rev counter pod on top of the dash and a trip computer, and the Alto range features a clear display and instrument set up across the board. A large speedo is the only other instrument in the pod with warning lights displaying the rest of the information. Buttons for the other equipment are laid out in a traditional manner and the sound system controls are placed nice and high, which is less distracting while driving.

Air-conditioning is standard in the SZ4 trim level, along with a pollen filter for sensitive noses. Front electric windows are a bonus and the combination of driver's seat height adjustment in the top model and a tilt adjustable steering wheel across the range makes it easy to find a comfortable driving position. Seats both front and rear are well padded and supportive and the Alto offers a decent level of sound deadening for a small car.

Remote central locking, an immobiliser and childproof rear doors do a good job on the security side, however, the lack of covered storage with the exception of a boot may be an issue for some.

For a small car safety is well catered for in the Alto. ESP is standard on the SZ4 model and it also gets curtain airbags to complement the standard dual front and front seat-side airbags. ABS with EBD is also present, along with Isofix settings for child seats.

With its three-cylinder, one-litre engine the Alto is never going to offer a particularly exciting drive, but the charismatic grumble of the small capacity unit is inspiring none-the-less. Suzuki has concentrated on ensuring the Alto offers decent ride quality and a finely tuned suspension system means it is able to cope with the differing surfaces, manholes and speed bumps of city roads well. On the motorway it puts in a surprisingly refined effort. It is not the most communicative of cars, but the steering is precise, the brakes sharp and the acceleration responsive - ideal for life in the city.

For families with young children or as a second family car, the Alto makes sense. Five doors will make it easy to get small children in and out of the rear and a decent level of safety is reassuring. The boot, however, is too small to carry a pushchair and the Alto will be too cramped for growing families.

The Suzuki Alto makes a fantastic choice as a first car. Compact, efficient, inexpensive and easy to drive, Suzuki has deliberately tailored the model to suit the needs of younger drivers.

The sharper, more charismatic styling of the new Suzuki Alto ought to improve its image among the younger drivers at whom it is squarely targeted. A trend towards more efficient vehicles by car buyers is also likely to work in the Alto's favour. Compared with the previous generations, the new Alto certainly boasts greater street cred. Build quality is sound and the materials used reflect those of other vehicles in the segment and the Alto's price. The plastics feel reasonably hard wearing and there are no obvious flaws inside or out.

A tall body and doors that open to a wide angle make the Alto an easy car to access. Despite its small stature it sits at a very reasonable height which also aids ingress. Rear legroom restrictions will mean the tall will struggle accessing the rear, but the five-door layout places it way ahead of some of its compact three-door competitors in this department.

The Alto features a basic sound system, although the upper trim levels benefit from four speakers where the entry level model can only boast two. The single slot CD player is MP3 and WMA compatible and an auxiliary socket is present. Not a particularly powerful system, sound quality is average as a result.

With an 18 to 30-year-old target audience in mind, Suzuki has added some bright and vibrant colours to the palette available for the Alto, many of which are reputedly inspired by nature. A total of nine shades are available. Inside, there are splashes of the exterior colour inside depending on the trim level and two-tone plastics help to liven things up along with patterned seats. The only down side is a bulky central vent system that seems out of place.

The Alto is an extremely easy car to park thanks to compact, easily judged dimensions, light steering, a tight turning circle and good all round visibility. Parking sensors are not available, but won't be missed.

Hyundai i10 Smart and refined, a more mature choice