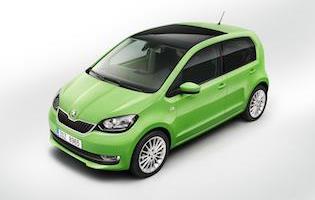 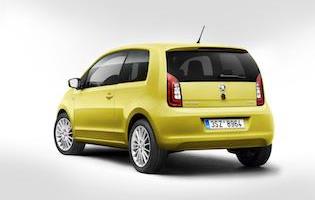 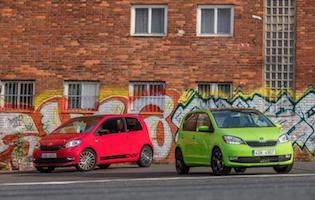 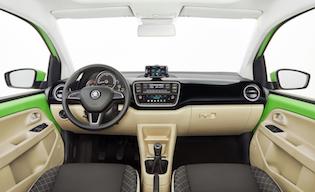 The Skoda Citigo is a low-cost, zero-frills city car designed to appeal to those who simply want to get around with minimal fuss and low running costs. The first-generation car achieved this, and now it's been updated. The exterior has been given a few new touches, while the interior benefits from a new screen and a couple of extra additions.

The front of the Citigo has a new reshaped front grille as well as a modified bumper, designed to give the car a more dynamic look on the road. New daytime running lights bring the car's visuals into 2014, while redesigned alloy wheels fill the car's arches nicely. There's also an all-new shade – Kiwi Green – which is likely to divide opinion.

Inside, there's a new redesigned instrument cluster as well as an updated infotainment system that gives better control over radio and media functions. It's designed to work seamlessly with a smartphone too, so should appeal to those who use their phones as media sources. There's also a new multifunction steering wheel available – though only as an optional extra.

There are no mechanical changes to be found in the new Citigo. The same 1.0-litre, three-cylinder petrol engine remains, available with either 59bhp 74bhp. Power is sent to the front wheels via either a five-speed manual or automatic gearbox. The manual's action is nice enough, and has plenty of accuracy for quick inner-city gear changes.

One of the Citigo's main attractions is its impressive packaging. There's more than enough room inside for four people, while boot space is pretty good too. There's no doubting that it's a small car, but this just adds to the car's appeal, making it easy to park in the tightest of spaces. There's also a good range of colour options to choose from, and all specifications come with a good degree of standard equipment.

Our verdict on the Skoda Citigo SE L

In an age of ever more complicated cars packing a dizzying degree of technology, the Citigo comes as a welcome breath of fresh air. Yes, it still packs some tech – pre-sense braking and Bluetooth connectivity to name just two – but its honest and sheer down-to-earth nature is hard to not appreciate. Add to that excellent value-for-money, and you have a car that ticks an awful lot of boxes.

Though there is just one engine option available, that one powerplant makes the Citigo an exceptionally cheap car to run. Skoda claims that it'll return an impressive 68.9mpg on a combined cycle, while a low CO2 figure of 96g/km will mean that vehicle tax won't be expensive either. It can also be purchased for just under £9,000, making it one of the cheapest cars on sale today.

This is the Citigo's party piece. Despite being really rather small, it's able to offer a degree of practicality which you simply wouldn't expect. The boot offers 251 litres of seats-up space, and this rises to an impressive 959 litres with them folded down. There's even a split-floor, giving a more flexible storage solution. There are plenty of cubbies inside the cabin too, ensuring the interior of the car stays clutter-free.

All of the Citigo's controls are well placed and simple to operate. There's the option of a multifunction steering wheel, but in truth the stereo controls are just as easy to use. The new screen placed in the centre of the instrument binnacle does make viewing figures such as speed and exterior temperature a little simpler, while the simple buttons in the centre of the dashboard make choosing a radio station an easy operation.

Thanks to well-sorted suspension and wheels shod in relatively large tyres, the Citigo's ride is surprisingly comfortable. It still struggles with larger bumps and potholes in the road, particularly at lower speeds, but when up and running it feels just right. There's also a distinct lack of road or engine noise – something you wouldn't expect from a buzzy little three-cylinder unit. It's a powertrain that does a good job of settling down, particularly at higher motorway speeds.

With remote central locking, an alarm and interior motion detector, the Citigo is just about as safe as any car in this class could be. It's also relatively unassuming in terms of styling, which should mean that it won't attract too much attention to itself.

When it undertook the NCAP crash tests back in 2011 the Citigo scored a full five stars, doing exceptionally well in all areas. It returned a score of 89 per cent of adult occupancy, alongside 80 per cent for child occupant safety and 46 per cent for pedestrian safety. Of course, this score was achieved some time ago, meaning that it may not be as safe as some cars that have been tested more recently.

Despite being small and relatively low-powered, the Citigo does a good job of being involving to drive. The steering has plenty of feeling to it, which means that it's actually quite a lot of fun to whisk the car through quicker corners. There's a good amount of grip too, owing to the car's low weight. Sure, the engine needs to be worked hard at times – especially when tackling steep hills – but for the most part it's a car that can be a little bit of a giggle to drive around.

The Citigo is a bit of a mixed-bag in terms of family appeal. Yes, there's room for four to sit comfortably inside and there's a good amount of space in the boot too. However, though that luggage area is of a good size for its class, it's likely to be quickly overwhelmed by a family's worth of items. You could use it as a family car, but it might be pushing the car's capabilities to extremes.

This is a crucial area for the Citigo. Thanks to its small, low-powered 1.0-litre engine as well as its relatively low purchase price, the Citigo is an ideal car for first time drivers. It's also in insurance group 2, which means that insurance premiums really shouldn't be too bad. With a five-speed manual and good visibility all around, it's the perfect car for those looking to cut their teeth on the open road.

Skoda's image is riding high at the moment, with cars such as the Octavia and Superb just two examples of the excellent, high-quality products that the Czech manufacturer is producing at the moment. The Citigo is certainly an extension of this. Though there are some harder plastics used throughout the cabin, everything feels very well put together. There are no squeaks and rattles – something you'd almost expect of a car in this segment – and its build quality feels closer to that of a car costing double its price.

If you're after the best accessibility possible, then the five-door Citigo is the best option. Thanks to wide doors it's not tricky to get in or out of the cabin, and they aren't too heavy either so shouldn't prove too much of a hassle to open. The boot is just as easy to gain access to, which should be a bonus when carrying shopping or rushing to load items in the rain. Given its size, the Citigo does a good job of being as user-friendly as possible.

As is popular with small city cars, there's a vast array of colours to choose from. As mentioned, there's also an all-new 'Kiwi Green'shade that is ideal for those looking to stand out from the crowd. Inside, there's a selections of trims to choose from, with a new piano black finisher giving the cabin a distinctly premium air. Top-spec Monte Carlo-edition cars also benefit from a lowered ride height for a sportier look.

With its compact proportions – the Citigo measures just 3,597mm compared to a Ford Fiesta's 3,969mm – it's really not hard to park the little Skoda. Higher specifications also benefit from rear parking sensors, which make positioning the car even easier. It's so easy to park that you'll soon start picking out more challenging spaces to fit in – something that can't be said of many cars on sale today. Light steering and good throttle response also make maneuvering the Citigo a breeze.