FR gains a bodykit which adds to sporty flavour 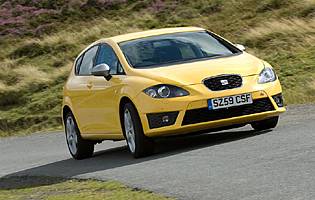 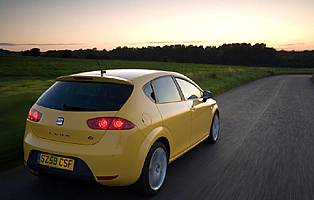 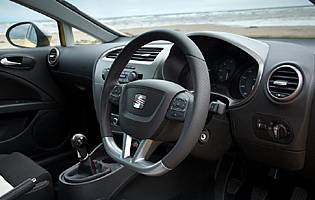 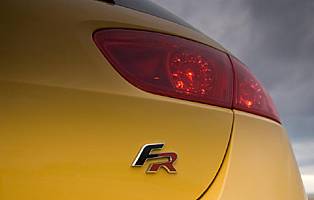 Seat has cultivated its image as the sporty brand within the Volkswagen group for several years now, and there are numerous performance versions of its entire range. Seat has also used the full complement of technology at its disposal to introduce a diesel version of the FR, giving the potential for a car that is both exciting to drive and economical.

The FR sits somewhere in the middle of the sporty Leon range, with the Sport model below it and the high power Cupra and Cupra R above it. Building on the already sporty design of the Leon, the FR gets distinctive front and rear bumpers with air scoops, vents and tasteful FR badges. Although more aggressive than the standard car, the FR strikes a good balance and avoids looking overly aggressive.

In all guises the Leon is a handsome and distinctive car, looking quite unlike its numerous competitors thanks to the bold curves and lines. Despite this it offers the levels of practicality expected of a five-door compact hatch, although the hidden rear door handles to help to make it look more stylish than most.

The Leon FR is also unusual in comparison to its rivals in that it offers a choice of petrol or diesel power in a sporting model. Both are 2.0-litre four-cylinder units, and both can be specified with either the standard six-speed manual gearbox or the impressive six-speed dual clutch DSG gearbox. Although the petrol FR offers very impressive performance, the diesel FR uses common rail technology for increased efficiency, and therefore is almost as fast as the petrol FR yet offers better economy than the less-powerful 2.0 TDI Sport.

As well as the increased performance and unique exterior details, the FR also benefits from other performance enhancements. All FR models are fitted with sports suspension, and also higher specification brake pads for improved performance. As well as the usual suite of electronic systems such as ESP and brake force distribution, the Leon FR also gains the XDS traction system, which uses electronics to mimic the effects of a limited slip differential.

Our verdict on the Seat Leon FR TDI DSG

Few manufacturers offer so many sporting variants of a particular model, but it is the FR that strikes the perfect balance between everyday convenience and occasional thrills. In diesel form it is reassuringly economical, yet there is sufficient performance to exercise the impressive chassis. Handsome and well-equipped, only a little less practicality than some rivals is a demerit, but it is a small price to pay.

Although the purchase price is at the higher end of the compact hatchback scale, it should claw some of this back thanks to the impressive fuel economy. In all other respects it should be no more expensive to run than a regular hatchback, aside from higher specification tyres.

The Leon is one of the older family compact hatchbacks, with cabin space that is average for the class rather than exceptional. The large centre console offers decent storage space, although the glovebox is relatively short on space.

The layout of the Leon is attractive and practical, with an unusual instrument and switch design. The red illumination is clear and distinctive, while the information display allows easy control of audio, telephone and trip computer.

Despite the FR's sporty aspirations, it still offers decent levels of comfort. The sports seats are very supportive over long distances, noise levels are well contained and the taut suspension is not fidgety or too harsh over bumps.

All Leon models have remote central deadlocking as well as automatic door locking on driving away. An interior alarm system is also fitted as standard, and versions with alloy wheels such as the FR also have locking wheelbolts.

The Leon comes with an impressive collection of active and passive safety systems as well as the reassurance of a strong crash test performance. The FR also benefits from the strong performance of its engine, brakes and tyres to give a high level of agility in the event of a potential accident situation.

The key aspect of the Leon FR's driving appeal is that it is able to perform admirably in a variety of roles. As an everyday machine, the Leon is effortless to drive, particularly with the diesel engine and DSG gearbox combination. The easy torque of the engine and two pedal layout makes short work of traffic, with standard cruise control and supportive sports seats. Flick the gearlever into Sport or use the wheel-mounted paddles for greater shift control and the impressive engine performance can be fully exploited. The suspension also strikes a fine balance between sporty firmness and comfort, and only on poorer roads is there any disturbance in the cabin.

The Leon can perform family duties with very little effort, with Isofix mounting points on both rear seats and a useable boot. Taller teenagers in the rear may be a little short on head and legroom, but the Leon is competitive with most rivals in this segment.

The Leon FR is probably outside the means of most first-time drivers, in terms of insurance and purchase price, although its other running costs will be relatively modest considering the performance on offer.

Thanks to its Volkswagen parentage the Leon offers a good standard of quality, and although it may not offer quite the same standard of materials as its more luxurious partner brand, it is still impressive. In terms of image, the Leon certainly trades on its sporty looks and competition history, synonymous with the brand but in particular with the Leon.

Access to front and rear seats is straightforward, with decent sized doors that open to a wide angle. Access to the boot is also good, although the aperture into the boot could be wider and deeper.

The standard audio system is a radio/CD unit with auxiliary and USB input with steering wheel controls. The system works very well with simple controls and clear menus, and the sound output is clear and powerful.

FR Leon models can be specified in a number of additional vivid colours, and these do much to maximise the impact of the exterior design. Inside the standard layout uses a lot of black colours which are partially offset by the red illuminated displays, but optional brighter fabric colours are a worthwhile investment.

The Leon has very light power steering at low speeds and a decent turning circle, although the slightly restricted rear vision is a negative. However, parking sensors fitted as standard to FR models upwards makes this less of a problem.