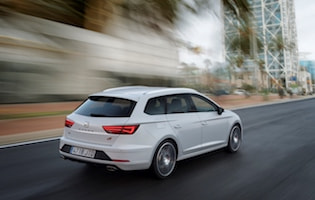 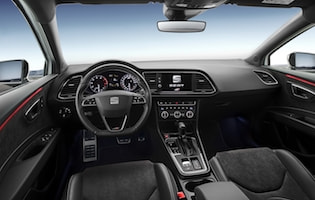 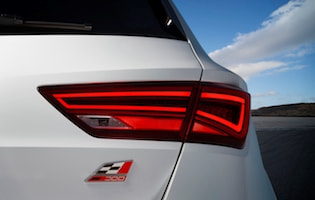 This is the updated Seat Leon Cupra, and the big news is that it has turned to all-wheel-drive – for the estate version (ST) we're testing, at least. The other headline is that power has been nudged up by 10bhp to 296bhp in order to keep the popular Spanish hot hatch relevant in the ongoing horsepower race.

Under the angular exterior design, the Leon Cupra's underpinnings are nearly identical to the Volkswagen Golf R. This is a very good thing, because that car is one of the best in its class. However, it's a little safe and dull and unfortunately that has transferred to the Cupra ST, which is a little firecracker in front-wheel-drive form.

While the exterior is bold and angular, perfectly in-keeping with its youth-orientated focus, the interior doesn't quite match up. It's rather dark and drab, though the £1,370 leather pack adds a premium feel. There's also there's plenty of space for occupants.

With a hot estate, practicality is as important as performance, and here the Leon Cupra ST excels. There's an impressive 587 litres of boot space, which increases to 1,480 litres if you fold the rear seats flat.

Behind the wheel, the changes to the car are subtle and barely noticeable, though the all-wheel-drive system does sap a little of the fun out of the car – not that it's anything other than blisteringly fast in all road conditions.

Our verdict on the Seat Leon Cupra ST 300

While it might not be quite as fun to drive as its predecessor, the Leon Cupra ST is brilliantly capable. The all-wheel-drive system puts the power down really well no matter what the conditions, and the 2.0-litre engine is plenty powerful. Even the manual gearbox, which is often a let-down in VW Group products, is great here.

As far as hot hatches go, the Leon Cupra has relatively low running costs. Officially, fuel economy is in the high-40mpg, but high 30s are more realistic. The impressive safety rating and low cost of replacement parts also help to keep the insurance group rating down.

Boot space is highly impressive, with 587 litres available even with the seats up – fold them away and you've got 1,470 litres to play with. It's going to take a hell of a lot of luggage to use that lot up.

The interior is plenty spacious too, with lots of leg and shoulder room for all passengers. Taller passengers might find the rear seats a touch claustrophobic, but they're ideal for kids.

The eight-inch touchscreen is a delight to use, and for people who use a lot of DAB radio it's ideal as it has the best station list navigation system on the market. The screen is also clear, with well-sized buttons that are easy to press without looking away from the road for too long.

As this is the sportier Leon the ride is a little harsher, but keep the car in comfort mode and the suspension irons out the road nicely. If you're making the step up from a non-sporty car the ride might be annoying at first, but you'll quickly forgive it for the way it improves the Cupra's cornering ability.

The Seat Leon comes with an alarm system to ward off unscrupulous types. It also automatically locks itself once you start driving and when you walk away from the car.

The Seat Leon achieved the maximum five-star rating in NCAP's testing thanks to a mix of crash safety features and driver aids. The fact it has airbags all round and electronic stability control helped it score well.

Here's where the Leon Cupra ST 300 excels. It has incredible grip and the 2.0-litre engine is really punchy. The way the power surges like an old-school turbocharged car is great fun and it's feels faster than its performance figures suggest. The extra bodywork over the rear does nothing to damage the driving experience.

The Leon Cupra ST 300 is the ideal family fun car for the parent who wants performance and practicality. While running costs will be a bit higher than a typical family estate, real world fuel economy of around 38mpg isn't too scary. Meanwhile, the large boot and relatively spacious rear seats should accommodate kids and their things with ease.

While the standard Leon would make a fantastic choice for a first car, this Cupra model does not. With a lot of performance on tap it could get inexperienced drivers into trouble quite easily, while the relatively large size of the estate could prove tricky out on the road.

Being a member of the VW Group means the Seat has access to its parent company's excellent build quality know how. Inside the Leon, the interior feels really well put together even if it does look a little boring, and should stand up to the rigours of family life.

However, the Seat badge doesn't quite hold the same appeal as VW, though fellow car enthusiasts will recognise the prestige of the Cupra.

With large door apertures and a fairly average ride height, climbing in and out of the Leon Cupra ST is a breeze. However, those who struggle with mobility might find the rear seats a little trickier as there's less space between the seat cushion and the front backrest to push out from.

A responsive touchscreen sits on the dashboard and is incredibly easy to use – navigating menus is quick and intuitive. The eight-inch screen comes with navigation as standard on Cupra models, as well as DAB radio, eight speakers and mobile phone connectivity.

The sound quality is far from perfect – if you're really into music you might need to fiddle with the bass and treble settings to get it just right.

Despite the youthful character the colour schemes available on the Leon Cupra are relatively subdued. There's a mixture of greys, blacks and whites, as well as a more vibrant red. True extroverts can option a grey paint job that comes with orange extras such as the wing mirrors and alloy wheels. The combination might sound garish but it looks brilliant.

Parking the Cupra ST is made easier thanks to well-sized wing mirrors, reversing sensors and a reversing camera that appears in the central touchscreen. It means that once you've come to terms with the length of the estate it's easy to get in and out of tight spaces.

And if you find yourself in a tight space in a car park, getting in and out isn't too tricky either because the doors aren't too long.