The Ibiza SC is distinctive and attractive from the outside 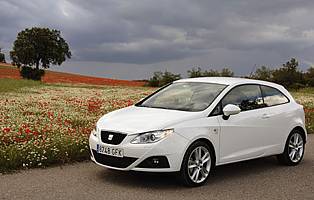 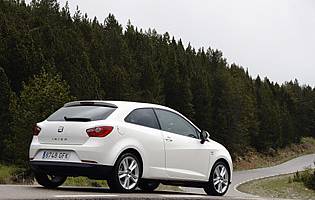 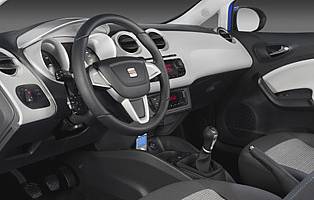 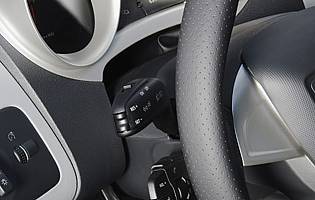 The Ibiza is Spanish manufacturer Seat's biggest seller, accounting for some 45 per cent of its sales. Seat has opted out of the conventional three-door naming policy this time, instead calling this model the Ibiza Sport Coupe. With its sleek design and sporty appearance, the name is apt, if unconventional.

Part of the Volkswagen Group, Seat has sometimes been something of a third wheel when it comes to parts and equipment, often getting last generation platforms to work with. Not so the new Ibiza, the three-door version of which has been creatively named the Ibiza SC or Sport Coupe. The model uses a brand new platform that will eventually be used on the Volkswagen Polo.

Seat has opted to give the three-door a separate identity because of its individual styling. It is, in fact, the high shoulder line at the rear that gives it a swooping coupe-like effect, rather than an actual coupe bodyshape. Regardless, like the five-door model, the SC boasts some exciting bodywork. Penned by former Lamborghini designer Luc Donkerwolke, there are flairs, lines and angles that give it a sporting edge. At the front is the 'arrowhead' design soon to be seen across the seat range.

The new Ibiza platform is both longer and wider than the outgoing model, giving the car more presence on the road. It also translates into more boot space. A choice of two suspension setups is available, one firmer and sportier than the other, and the model is initially launched in three trim levels. Keen drivers will be pleased to hear hardcore FR and Cupra versions are also planned for the near future.

While the platform is all new, the engine range may seem familiar from Volkswagen Group products past and present. However, the addition of a seven-speed DSG twin clutch gearbox is a first for the segment, giving the new Seat Ibiza a real feather for its cap. Other firsts for the segment include bi-xenon headlamps, while ESP across the range including hill-hold assist is another draw.

Our verdict on the Seat Ibiza Sport Coupe 1.6 Sport

Despite the forward thinking name, the Ibiza Sport Coupe doesn't really stray from the standard three-door hatchback template. That's no bad thing, because its familiar layout, comfortable seating arrangement and sensible performance add up to an admirable package. The keys to its appeal are the dynamic styling and good equipment levels, with attractive lines and high end features such as bi-xenon lamps belying the model's size and price tag.

Designed to meet the needs of a younger car buyer, the Ibiza Sport Coupe is very competitively priced considering its generous specification. Sensible performance means insurance should not be too taxing, although the last generation engines are not as efficient as some.

It is not the nature of the three-door Ibiza Sport Coupe to be particularly spacious or practical, but Seat has done a good job of providing as much room as possible inside the small car. The boot is actually among the largest in its class despite a high sill that might hamper loading, and the front seat back are curved to offer maximum leg room for the rear passengers. Space in the rear is tight, but not cramped and the driver and front passenger benefit from additional headroom thanks to the lowered seats. Storage space is not great, for seat-back pockets opt for one of the upper trim levels.

As well as lowering the driver's seat, Seat has also fine tuned the driving position by angling the dials and instruments towards the driver, which is a nice touch. There are two large dials with a separate screen displaying additional information. The ventilation and sound system displays are digital and have a high quality appearance, and the sport model gets leather for the adjustable steering wheel and on the well positioned gear knob. A new development is the availability of an integrated docking station for TomTom sat-navs; versions for other popular makes are in the pipeline. Controls for the stereo are ideally positioned on the column, rather than the wheel itself.

Although it's the firmer of the two choices, the Sports suspension fails to detract from an accomplished ride in the Ibiza Sport Coupe. It's not crashy and doesn't become tiresome. Supportive, sculpted seats prove very comfortable, too, while the driving position is easily fine tuned. Air-con is standard in the Sport trim level, but unfortunately not for the Reference entry level model.

Remote central locking is standard across the range, but a lack of storage inside means valuables will need to be moved to the boot to keep them out of sight. Time delayed headlights for the Stylance and Sport models are a nice touch though, adding an additional element of safety and security.

A five-star Euro NCAP rating speaks for itself, and ESP is standard across the Ibiza Sport Coupe range. There are other developments too, including hill-hold control for safer manoeuvring on slopes, bi-xenon headlamps - a first in its class - and cornering fog lamps as standard on the Sport. A tyre pressure warning system is part of the ESP programme and an impressive haul of airbags is also standard.

Available with comfort or sport orientated chassis, the Ibiza Sport Coupe attempts to offer a driving experience to suit most needs. The Sport model naturally uses the sportier of the two, its extra firmness encouraging a more vigorous driving approach. The all new platform feels taught and responsive while the controls are reasonably crisp. Compared to some of the fizzy turbocharged petrol engines from the Volkswagen, the 1.6-litre petrol unit feels a little flat with no particular surge, although it is capable of providing some thrills when pushed.

Space restrictions and practicality mean the Ibiza Sport Coupe is not the ideal choice for a family car. The five-door version, featuring similar exterior and interior styling, is a more sensible option particularly for those needing to get child seats in and out of the rear.

Young first car buyers are among the key demographic for Seat's increasingly successful sales people. The three-door format, energetic styling and value for money specification should all appeal to younger drivers, particularly those with an eye for style and little in the way of load-shifting responsibilities.

The Ibiza's youthful image is bolstered by the exciting lines of the new model and should continue to appeal to a younger audience. The new design is adept at turning heads and boasts a large amount of kerb appeal, particularly in Sport trim. Build quality appears to be high, with reported extra scrutinising of parts and build processes at the factories paying dividends. The only let down is the slightly inferior quality of some of the interior plastics which are hard and rough in places.

Naturally, the Ibiza Sport Coupe's three-door layout makes it less accessible than the five-door model. A small rear hatch met by a high sill means an up and over approach is required to place items in the boot and the front seats need to be folded and slid forward to allow entry to the rear bench, although this is no more difficult than in any other three-door hatchback. Seat is proud of the Ibiza Sport Coupe's sportier driving position, lowered by 22mm, although it might mean less flexible drivers find the seat a little more awkward than usual to enter and exit.

The single slot CD player and radio unit is stylishly incorporated into the centre console and features an auxiliary plug-in for portable devices. Depending on trim level, the Ibiza Sport Coupe will also be available with integrated Bluetooth, something of a luxury in its class. The sound system itself uses six speakers and is capable of providing a good level of sound quality in the compact interior. Driver and front passenger in particular benefit from separate bass speakers and tweeters.

Seat is well aware of the youth market, particularly for its three-door Ibiza, so has made sure a vibrant array of colours is available for the model. A range of customisation options is also in the pipeline to ensure customers can have as individual a car as possible. The two-tone interior does an excellent job of adding some life to the inside. Alloy wheels are standard for the upper two trim levels - the Sport model in particular gets some funky 16-inch versions.

A high shoulder and slim rear window mean rear visibility is not fantastic, which hampers reverse parking a little. The model boasts an impressively tight turning circle however and doesn't feel at all cumbersome to manoeuvre. A flat rear end helps when reversing although parking sensors are available at cost.

Peugeot 207 Easy on the eye, particularly in three-door form