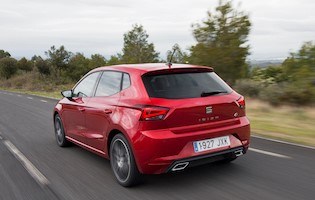 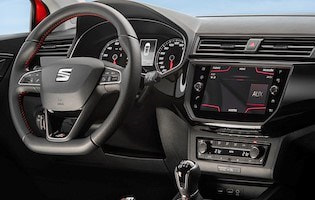 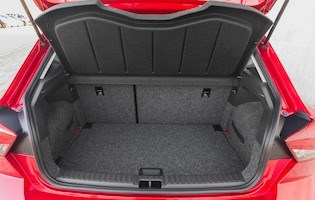 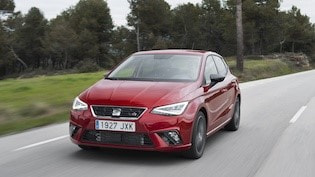 The latest Seat Ibiza is a hugely important car for the Spanish manufacturer. With more than 5.4 million units sold globally since it first went on sale, the new model has big shoes to fill. Seat has packed the supermini with loads of tech in a bid to give it an edge over its rivals.

The Ibiza is the first car in the wider Volkswagen Group to make use of the new MQB A0 platform. As a result, the Spanish supermini benefits from more space in the cabin, as well as a range of features normally reserved for more upmarket cars – such as wireless phone charging and semi-autonomous safety equipement.

In the looks department, the theme seems to be evolution rather than revolution. The Ibiza is now more of a pint-sized Leon than ever, with sharp lines and triangular motifs lending the new supermini a more attractive and grown-up appearance than before. There are five trim levels available: S, SE, SE Technology, FR and XCellence.

As you would expect from a VW Group car, build quality is sound throughout. The cabin isn't the most exciting place to sit, and there are still some cheap-looking plastics here and there, but on the whole it feels well-made and well put together. All the important controls fall to hand, and dials and displays are all clear and easy to read.

The latest Ibiza will appeal to younger, outgoing buyers who are in the market for a good-looking and reasonably well-equipped daily driver. Thanks to a range of economical petrol engines, the Ibiza won't be massively expensive to run, either.

The new Ibiza ticks many boxes. It's capable on the road, looks good, is relatively affordable and won't cost the Earth to run. It might have a bit of a dreary cabin, and isn't as fun as some of its rivals to drive, but on the whole it represents a solid choice in the incredibly competitive B-segment market.

Prices for the new Seat Ibiza start at £13,130, rising to £17,310 in the UK, making it slightly more expensive than some of its rivals. Running costs shouldn't be too crippling either, thanks to a range of economical petrol engines.

Seat was the first of the VW Group manufacturers to make use of the new MQB A0 platform with the new Ibiza, which allows for even greater interior space. Head- and legroom have been increased, and two adults should be able to manage longer journeys sitting in the back seats. Boot space has been improved too, with the Ibiza now offering 355 litres of storage capacity. This makes it the best in its class, and also more spacious than the larger Ford Focus.

Ergonomically, the Seat's controls are all laid out in a convenient and comfortable manner. Everything is within easy reach of the driver, and the displays are crisp and easy to read. The only niggle – which is a problem common to all cars fitted with touchscreen technology – is that navigating the infotainment system while on the move can be a bit tricky.

We had a bit of a problem with the Ibiza as far as comfort was concerned. The seat base in our test car was angled up towards the steering wheel, and no amount of adjustment seemed to correct it. This did become uncomfortable after a while. This issue aside, however, the driving position was pretty spot on – with all essential controls within easy reach. Light controls for the steering, pedals and gearbox make the Ibiza less tiring to drive.

As is the norm these days, the Ibiza makes it hard for thieves to break in. There's remote central locking, and an immobiliser fitted as standard, while an alarm can be specified as an option. As the Seat name doesn't quite carry the same levels of badge prestige as some of its more premium rivals, the Ibiza shouldn't attract too much attention if left parked on the street.

The latest-generation Ibiza has not yet been crash tested by Euro NCAP, so a definitive safety rating is currently out of the question. However, its predecessor was awarded the full five-star rating when it was tested back in 2011, and Seat will be keen to build on this with the new car. An impressive array of safety equipment will no doubt help the Ibiza out, with Seat fitting systems such as front assist, traffic jam assist and adaptive cruise control.

You'd be hard-pressed to say the Ibiza wasn't a capable little supermini when it comes to driving dynamics. While its controls might be a little on the light side of things with limited feedback, the steering set-up was responsive and allowed you to point the car into bends with little fuss. Out on the motorway, there was a fair amount of wind noise from the oddly-shaped wing mirrors, and the 17-inch alloys did create a noticeable level of road noise. On the whole though, the Ibiza is a great car to drive – if a little unexciting.

With its new five-door only configuration, the Ibiza is more appealing than ever as a family car. It will make light work of being a family runabout, with enough room to ferry children to and from school, and a decent-sized boot for the weekly shop. That said, it might start to feel cramped over long journeys – a task that should be left for a larger, primary family car.

With an entry-level Ibiza S starting at £13,130, it is a tad pricier than some of its rivals – particularly the Ford Fiesta, Citroen C3 and Hyundai i20. That said, it still isn't prohibitively expensive to buy, won't cost the Earth to run and is easy to drive – so it'll no doubt appeal to first-time buyers.

Compared with its predecessor, the new Ibiza is a much more grown up and premium-looking supermini. Its stylish exterior makes it one of the more attractive contenders in its segment – especially when specified in the sporty FR trim level. Inside, there's no denying that Seat has gone someway to improve quality, and while the cabin is a nice place to sit, it does feel somewhat devoid of character.

Seat has ditched the three-door configuration for its latest Ibiza, meaning the Spanish supermini is now available as a five-door only. This means that access to the rear seats is easier than ever, and buyers will no longer have to worry about folding the front seats down so passengers can clamber into the back. The boot does have a bit of a lip, but loading items in won't prove too strenuous.

As far as in-car entertainment is concerned, the Seat Ibiza is roughly on a par with its main rivals. Entry-level models benefit from Bluetooth connectivity and a basic media interface, while higher-specification models gain an eight-inch touchscreen infotainment system and satellite navigation. Interestingly, DAB radio is an optional extra on all trim levels aside from the top-flight FR and XCellence models. Considering this is usually a standard feature on rivals, this is a mark against the Seat.

The latest Seat Ibiza is a far more grown up car than its predecessor, and to emphasize this Seat is making it available in a number of handsome, sensible colours. There's the classic white, grey, silver and black options as well as the smart 'Mediterranean Blue' and 'Desire Red' colour schemes. Also available is a rather unappealing 'Mystic Magenta', and an eye-catching 'Mystery Blue'. There are five trim levels: S, SE, SE Technology, FR and XCellence.

Even though Seat will fit your Ibiza with a rear parking camera as an option on SE models and above (or as standard on XCellence models) – chances are you won't really need it. The Ibiza is dainty enough to fit into tight spaces without too much trouble. The only issue is that the small rear windscreen does inhibit visibility out the back somewhat, as do the small wing mirrors.

Tyre repair kit cones as standard, and a space-saving spare wheel is optional.