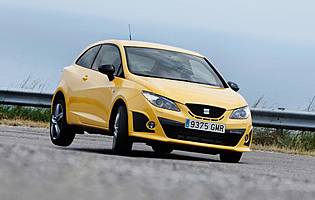 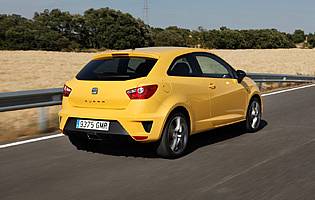 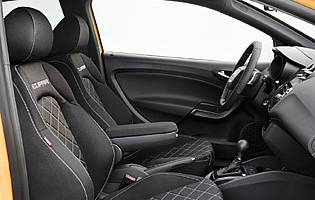 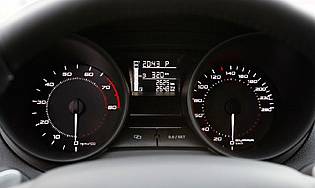 One year on from the launch of the three-door Ibiza Sports Coupe, Seat has released the much anticipated high performance variants. Adding a high-specification engine and gearbox to the impressive new chassis allows the new Cupra model to compete with the hot-hatch hierarchy.

Seat's Cupra model can trace it roots back to genuine sporting ancestry. The name itself is an amalgamation of the words 'Cup' and 'Racing', and a series of Cupra models have paved the way for the latest, high-powered version of the compact hatchback model from the Spanish manufacturer. The Ibiza Sport Coupe (SC) on which the new model is based has already hit the ground running but, not satisfied with launching one new model, Seat has unveiled three-high-powered variants at once.

All three use the seven-speed twin-clutch DSG gearbox plus the supercharged and turbocharged 1.4-litre TSI Volkswagen Group engine and, in the UK, all three are available as three-door models only. The FR model boasts 148bhp, while the Cupra and special edition Cupra - built in limited numbers and known as the Bocanegra - use a 177bhp version of the same engine.

Accompanying the advanced chassis (the Ibiza SC was the first model to use the new Volkswagen platform) the high specification gearbox and the technically advanced gearbox, the Ibiza Cupra also makes use of the clever XDS set-up to ensure extremely competent road holding and handling. The system works with the ESP to brake the wheel that loses grip, preventing loss of traction, wheel spin and allowing for a smoother exit from corners.

In the Cupra model, a high specification interior includes equipment such as embossed sports seats, climate control and heated door mirrors. Outside, the specially designed Cupra bodywork also boasts cornering fog lamps and tinted rear windows. Targeting a younger driver means Seat offers all of this at a very competitive price, too.

Our verdict on the Seat Ibiza Cupra

As a package, the Ibiza Cupra is a fantastic proposition for hot-hatch drivers. Fast, nimble, safe and refined it ticks all the boxes. The driving experience is dulled a little by the seven-speed DSG gearbox with saps some of its energy, but the car's excellent chassis and bags of character easily compensate.

Designed to meet the needs of a younger car buyer, the Ibiza Sport Coupe range is as a whole very competitively priced considering its generous specification. Considering its high-spec engine, transmission and the raft of equipment as standard the Ibiza Cupra offers an even greater deal for drivers. Although powerful, the 1.4-litre TSI engine is also frugal, meaning running costs should also be kept low.

It is not the nature of the three-door Ibiza Cupra to be particularly spacious or practical, but Seat has done a good job of providing as much room as possible inside the small car. The boot is actually among the largest in its class despite a high sill that might hamper loading and both head and legroom are decent in the rear. The driver and front passenger benefit from additional headroom thanks to the lower seating position than in five-door models. Cabin storage space is not great, however, with only the glovebox and door pockets to rely on.

As with the rest of the Ibiza SC range, Seat has also fine tuned the Cupra's driving position by angling the dials and instruments towards the driver. There are two large dials with a separate screen displaying additional information. The ventilation and sound system displays are digital and have a high quality appearance and the steering wheel is fully adjustable. Paddles for the DSG transmission are wheel-mounted and pleasant to use, requiring just a tap to change gear. The Cupra also benefits from the availability of an integrated docking station for TomTom sat-navs. Controls for the stereo are ideally positioned on the column, rather than the wheel itself.

An accomplished ride straddles sports and regular driving well. It's not crashy and never becomes tiresome. The sculpted seats prove very comfortable, too, while the driving position is easily fine tuned, although off-set pedals take a little adjusting too and can skew the driving position slightly.

Remote central locking is standard but a lack of storage inside means valuables will need to be moved to the boot to keep them out of sight. Time delayed headlights add an additional element of security, as do tinted window in the rear.

A five-star Euro NCAP rating speaks for itself, and ESP is standard across the range. The XDS technology adds an additional safety layer as does the hill-hold system. Cornering fog lights improve visibility in the dark and a tyre pressure warning system is also standard.

With its 177bhp supercharged and turbocharged engine, it comes as no surprise that the Cupra has an impressive, if not class-leading, turn of pace. The use of the XDS ESP software means the model is an inspiration through the corners and the responsive, perfectly weighted steering is a joy to use. Although extremely fast to change gear and extremely sedate and frugal when required, the seven-speed DSG gearbox tends to dominate the car when driving quickly, feeling more detached than a manual box might and occasionally reluctant to play-ball. Firmer springs and dampers suit the Ibiza SC chassis well and manage to retain a large degree of refinement.

Although capable as acting as transport for a small family, the Ibiza Cupra is less suited to the role than its five-door counterparts. Featuring similar exterior and interior styling, the five-door model would prove a more sensible option particularly for those needing to get child seats in and out of the rear.

The three-door format, energetic styling, powerful engine and value for money specification should all appeal to younger drivers, particularly those with an eye for style and little in the way of load-shifting responsibilities. The XDS system makes it an easy car to drive despite its higher than average output, too.

The Seat Cupra is not a model lacking in credibility, with Seat's genuine racing credentials behind it. A respected engine also boosts the model's appeal. The youthful image is bolstered by the exciting lines and is designed to appeal strongly to a younger audience. Material quality is vastly improved and build quality appears excellent, with the same sturdy fit and finish as found elsewhere in the Volkswagen Group range.

Naturally, the Ibiza Cupra's three-door layout makes it less accessible than the five-door model. A small rear hatch met by a high sill means an up and over approach is required to place items in the boot and the front seats need to be folded and slid forward to allow entry to the rear bench, although this is no more difficult than in any other three-door hatchback. Although well bolstered, the front seats are simple enough to slip into.

The single slot CD player and radio unit is stylishly incorporated into the centre console and features an auxiliary plug-in for portable devices, but not USB. The sound system itself uses six speakers and is capable of providing a good level of sound quality in the interior. Driver and front passenger in particular benefit from separate bass speakers and tweeters. Bluetooth is an optional extra. Curiously, the stereo system is angled towards the driver, which seems unnecessary given the audio controls located behind the steering wheel.

Being one of the more expensive and desirable models within the expanding Ibiza range, trim levels on the Cupra model are impressive as standard. The embossed sports seats and high quality materials are instantly noticeable and the dashboard plastics are a step up from Seat models of old. Steering wheel and gear lever naturally get a leather coating and piano black surrounds for some instruments and above the binnacle are tastefully applied. The interiors are dark and moody, but this adds to the character. A range of vibrant exterior colour options is available. Solid colours suit it best.

A high shoulder and slim rear window mean rear visibility is not fantastic, which hampers reverse parking a little. The model boasts an impressively tight turning circle however, and doesn't feel at all cumbersome to manoeuvre. A flat rear end helps when reversing although parking sensors are available at cost. A standard hill-hold system is also helpful when parking on a slope.