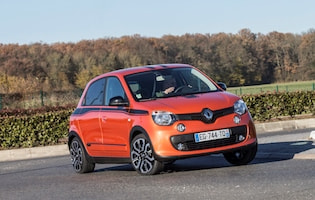 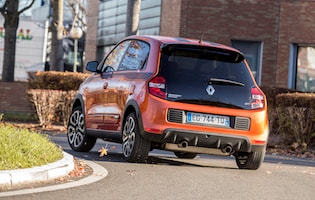 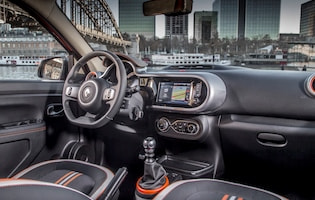 The rear-wheel-drive Renault Twingo city car has been crying out for a go-faster, souped-up version, and it's finally here. The GT isn't a full-blown, lunatic-spec RS model – packaging issues prevented Renault from fitting a big engine – but it's certainly a nippy, agile urban runabout.

The Twingo GT retains the standard car's silhouette but adds some sporty touches, including the twin exhaust, rear spoiler and the little air intake on the left flank. It also comes in a range of sporty paint jobs, with black, white, grey and orange body colours set off by orange or black decals, depending on which colour is chosen.

It has been livened up inside, too, with seat upholstery resembling the upper of a running shoe and glossy plastics on the dash.

Underneath all that, there are mechanical changes, too. The suspension has been tweaked to reduce the amount of body roll, and the 0.9-litre three-cylinder petrol engine has been uprated to produce 108bhp. The result is a city car capable of 0–60mph in a respectable 9.4 seconds.

It's no handling sensation, and the reworked suspension can't stop the tall body rolling altogether, but it's a slightly more stable machine than the basic car. More importantly, though, you really feel the engine's added punch pulling you through corners and zipping you about in traffic.

Our verdict on the Renault Twingo GT

The Twingo GT may not quite be the hot hatch we were hoping for, but it's still capable enough to get a wiggle on and it's perfect for navigating the country's crowded city centres. It takes everything that's good about the normal Twingo and adds a little more stability and punch. In short, it's the best Twingo on sale.

Prices for the Twingo GT start at £13,755, which is quite a lot for a city car, but the looks and performance will be justification enough for many customers. Once you've got the car, it will probably prove quite inexpensive to run thanks to its reasonable fuel economy and relatively cheap servicing.

The Twingo isn't as practical as some of its biggest rivals, and that's thanks in part to its strange layout. Putting the engine at the back means the boot isn't especially huge, and the floor heats up alarmingly thanks to the hot engine underneath it. It's fairly roomy inside, though, with plenty of space for front occupants and enough room for two children to comfortably share the rear bench.

The Twingo's driving displays are clear and simple, but the standard radio does take a little fathoming before it becomes second nature. Some of the audio controls are a little hidden, too, particularly those on the paddle behind the steering wheel. Other than that, though, it's very conventional and simple to master.

The Twingo GT's new suspension means ride comfort has been somewhat compromised, but it's still capable of soaking up all but the worst potholes. On a motorway, it does get blown about by crosswinds, and the seats aren't as supportive as you might like, but then it isn't a car for long journeys, despite its name. If you just use it in urban areas, it'll be absolutely fine.

Without clever tech such as keyless entry to worry about, the Twingo GT is likely to be fairly secure. Even those smart, diamond-cut alloys should be safe thanks to the locking wheel nuts. The mainstream badge means it shouldn't be too much of a target for thieves anyway.

The Twingo managed a respectable four-star crash test rating when it was introduced back in 2014, and though that isn't brilliant, it's fairly normal for city cars to score slightly fewer points than larger vehicles. Scores were generally good – particularly the 81 per cent child occupant protection rating – and only the lack of safety assistance systems lets it down, but that's normal for this segment.

The GT version of the Twingo sits on lower springs, the track has been widened and the suspension stiffened, but it still isn't the last word in handling prowess. It's a tall car, and it rolls through the corners, while the steering is ever so slightly too light and devoid of feedback. It's nippy, though, and the extra power makes whizzing through traffic easy and fun.

Because of its small dimensions, the Twingo is hardly likely to be the main family car, but it will work nicely as a second car behind a larger estate or SUV. It's roomy enough to take two adults and two children on a day out, and it's certainly capable of the school run and other light duties. It's hard-wearing enough to cope with family life, too.

With decals and bright paintwork, the Twingo may appeal to a lot of young drivers, but the extra power of the GT model is likely to affect insurance premiums noticeably. If you can stomach those annual payments, though, the Twingo will be a decent first car. It drives well, has reasonable street cred and enough go to prevent it feeling disappointingly slow.

Somehow, the Twingo GT manages to wear its sporty look well, although the rear air intake on the left wing does look a little out of place. Quality is as you'd expect from a city car, with hard plastics on the centre console, lower dashboard and door cards, but the GT's glossy plastic dash trim and leather seat bolsters do lift the scene noticeably, giving a slightly more premium feel.

The Twingo GT is only offered as a five-door, so access to both the front and rear seats is good. All four passenger doors open wide, and the apertures are big considering the car's diminutive dimensions. The boot, too, is easily accessible, with little in the way of a lip to prevent the loading and unloading of bulky, heavy items.

As standard, the Twingo comes with a pretty nondescript radio and a plug-and-bracket system for mounting your mobile phone. Bluetooth and digital radio are standard, but if you want goodies such as a touchscreen or a rear-view camera, you'll need to upgrade to the £600 Techno Pack, which offers an R-Link infotainment system and USB input.

Just four colours are available for the Twingo GT – white, grey, black and orange – and all are offered with sporty decals adorning the wings, bonnet and roof. On some city cars, the sporty look just seems a little too ridiculous, but not with the Twingo. It manages to bridge the gap between hot hatch and urban runabout without a hint of irony.

With the Twingo's comparative lack of bulk and tiny turning circle, parking is a doddle. If you want a little more help, the Techno Pack's parking camera is there for you, but you probably won't need it because visibility is excellent. The steering isn't too heavy, either, so backing into a space isn't likely to give your arms much of a workout.