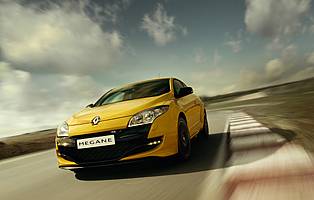 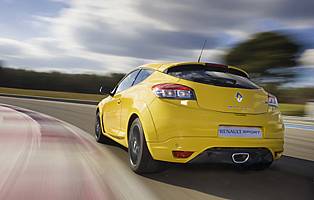 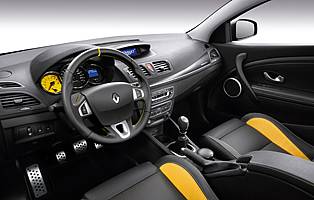 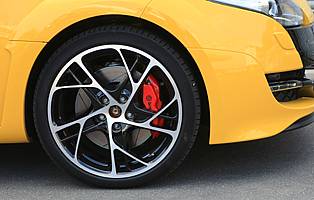 The first performance variant of the new Renault Megane range is based on the three door Coupe body. Using a 2.0-litre turbocharged petrol unit with an impressive 250bhp, the Megane Renaultsport 250 is available with a choice of two chassis and a distinctive exterior design that marks it out as the performance range-topper.

Adopting the Coupe body style as the platform for the new Renaultsport Megane 250 is an inspired choice not only because its good looks automatically lend themselves to a performance model but also because it allows the new model to rival coupes and two-plus-two models from other manufacturers, as well as the usual hot-hatch contenders.

The all-important power-plant will be familiar to fans of the previous generation Renaultsport Megane F1 Team R26. Both power and torque have been boosted courtesy of a modified turbocharger with improved performance at low rpm, re-mapped electronic control of the fuel injection and the introduction of variable intake valve timing. In fact, 25 per cent of the new model's engine hardware is new. The result is impressive acceleration in gear and from a standing start, but longer ratios in the six-speed manual gearbox ensure the new model can retain a greater degree of refinement at speed.

Amid a raft of visual enhancements for the interior and exterior on top of the specially designed body kit that comes as standard, drivers can opt for 19-inch alloy wheels, leather Recaro sports seats and a range of electronic upgrades. Perhaps the most interesting option however, is the Cup chassis. Aimed at drivers keen to exploit the model's performance on track, the Cup chassis equipped models are marginally less expensive, feature less standard equipment but boast firmer dampers, stiffer anti-roll bars and a limited-slip differential. Both chassis variants boast three-stage ESP (normal, sport and off modes) and a racing start system for speedy getaways.

The focus on delivering sports performance is also evident from the level of attention paid to Renaultsport 250's hub assemblies. A special design uses complicated geometry to reduce unsprung weight - improving the car's handling and allowing larger brakes to be fitted. Like the standard Megane Coupe range, the Renaultsport 250 also benefits from an excellent safety record with impressive crash test results, and generous standard safety equipment.

Our verdict on the Renault Megane Renaultsport 250 Coupe

The attention to detail has paid off with the new Renaultsport 250 and the model offers excellent performance and assured handling on road and track regardless off chassis choice. The standard Sport chassis offers a remarkably refined ride without compromising the sporty feel. Engine performance is impressive, particularly considering the fuel consumption and emissions figures. The new Renaultsport 250 doesn't feel as hardcore as some of hot-hatch and performance coupe models out there, but is adept at switching between exciting driving experience and refined everyday transport.

Borrowing much from the regular five-door Megane, the Coupe's interior is familiar. The result is a good level of space for people and oddments. The rear section is less accommodating, purely because this is a three-door car with a sloping roof. It's perfectly useable, but tall adults won't want to travel long distances. At the back the boot offers ample space for what is a car biased more towards style, although the rear hatch is small and positioned rather high.

Taking a leaf out of the Laguna's book, a lot of the Megane's control layout is familiar. It also works well and is more intuitive than some rival offerings while managing to combine usability with design flair. A case in point is the main cluster's mix of analogue and digital displays. Elsewhere, the likes of remote audio controls on the steering column are a welcome addition and separate controls for the sat-nav, where specified, are useful. A yellow rev counter is a neat touch for the sports range-topper and an audible buzzer warns when its time to change gear. Steering, pedals and gear change are excellent, and well suited to a more aggressive driving style.

Striking a sound balance between sporting behaviour and comfort, the Megane Coupe is a relaxing vehicle to ride in. Road noise is pleasingly low in all situations, plus the cabin is big enough for two adults up front to not feel cramped. You'll need to be more accommodating if you're sitting in the back, however. Decent equipment levels help in the comfort stakes, too. The standard seats are very impressive - leather or cloth Recaro's are available as an upgrade.

All the bases are covered here, what with remote central locking plus an immobiliser and alarm present across the range. Keyless access and ignition is standard on the Renaultsport 250.

Renault has successfully cultivated a solid safety reputation and the Megane Coupe yet another well executed car. There are plenty of airbags in the cabin, while electronic aids do their best to keep you out of trouble. The Renaultsport 250 version allows the driver to switch the ESP to Sport mode or off completely for a less artificial experience. Crash protection is another Renault strong suit, as numerous EuroNCAP results show.

The various sporting versions of the previous generation Megane were some of the finest the French manufacturer has produced, and the new Megane Coupe Renaultsport 250 picks up where they left off. For hardcore drivers and track fans the Cup version comes with a limited-slip differential, but the standard version still offers plenty of thrills with a responsive chassis, nicely weighted steering with plenty of feedback and a powerful engine. Despite its speed and impressive handling characteristics, the new model feels refined on the motorway and the ride, although firm, is not as harsh as some rivals. In some ways it feels softer than the last generation Renaultsport Megane's particularly as there's less of a soundtrack, but in truth it offers a superbly measured GTI compromise.

There's a reason the five-door Megane exists - it's a better choice than the three-door model. Rear seat access isn't fantastic in the latter, something you'll notice when attempting to belt in small children.

Easy to drive and smartly styled, the Megane Coupe is not a bad choice as a first car. The Renaultsport 250 version may be a little too powerful for the novice driver, however, and insurance may prove a sticking point in a performance vehicle.

For a three-door car the Megane Coupe is a relatively straightforward machine to access. Like any coupe its doors are big, so you might need to exercise caution when in tight spaces. Front seat access is fine, while you'll need to be reasonably agile to access the rear seats - it's easier to get in than out. At the back the car's tailgate doesn't require much effort to raise or lower, but is small. The interior door handles are positioned too far forward, meaning more effort is required to close the door or hold it steady in a gust of wind.

The basic set-up is more than adequate and the steering column-mounted controls certainly make life easier. The unit's display is clear and easy to read. Upgraded systems include USB connectivity or a choice of two sat-nav systems. The TomTom unit is neatly integrated and controllable using dedicated buttons behind the gear lever. It was easily flustered in the test car however; the Carminat DVD system may prove more reliable.

Renaultsport fans will be pleased to learn that the Sport yellow paint option is retained, and is even available on the seatbelts and door inserts for fans of a loud interior. Elsewhere the Renaultsport model gets all the additional kit you might expect of the range topping sports model; alloy pedals, leather wheel and gear knob, standard 18-inch alloy wheels (bespoke 19-inch wheels are an option), an F1 style rear diffuser and tweaked bumpers.

Despite the Megane's low -slung driving position forward visibility is good. Rear visibility is less impressive due to hunched shoulders and a narrow, angular rear screen. Accurate steering with plenty of assistance certainly helps matters, while parking sensors make a world of difference.

Volkswagen Golf GTI is less pretty but a renowned performer

Volkswagen Scirocco 2.0 TFSI is equally refined but has less power