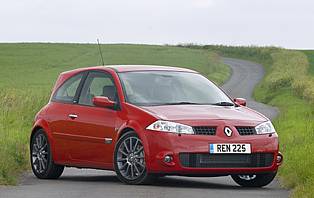 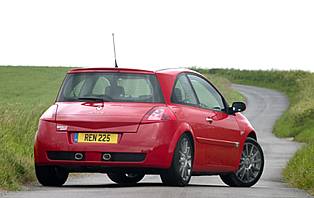 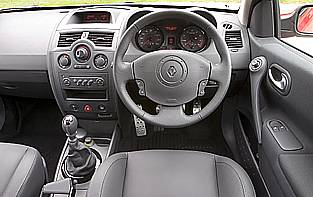 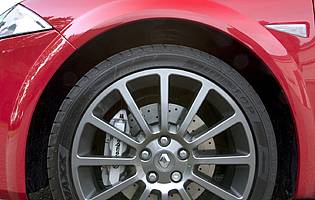 With a long line of impressive performance cars from the Renault stable, the Megane 225 has a big reputation to live up to. Initially the 225 received some criticism for a lack of sparkle, and to this end Renault introduced the Cup version. With a number of detail enhancements it aims to provide the driving thrills demanded by buyers of hot hatchbacks.

Available only in three-door Sport Hatch form, unlike the regular Megane 225, the Cup is sold alongside the original version as a more focused and enthusiast oriented car. Externally the differences are limited to anthracite coloured wheels and door mirrors, with discreet Cup badges being the only obvious exterior clue.

The main changes are underneath the daring exterior, which amount to a comprehensive retuning of the chassis. Both the front and rear damping settings have been adjusted, and the springs have been increased in stiffness by 25% at the front and a large 77% at the rear. In addition, the electric power steering system has been revised to give more feel and increased weighting of the steering action. Finally, the front brake callipers have been switched to higher specification Brembo items, while the brake master cylinder has been increased in size to give more braking power.

One further modification to the Cup model is the ability to deactivate the ESP system, which on the regular model is not possible over a speed of 30mph. This indicates how the Cup model is designed to be more of a sporting choice than the regular version, and the modifications do have a significant effect. With the balance of the car pushed more towards handling rather than comfort, the 225 Cup responds much more directly to inputs from the steering wheel, and it makes the most of the grip available from the Dunlop tyres.

However, Renault have not sacrificed all comfort for the sake of handling, and the Megane still does an impressive job of combining the two qualities. It is noticeably firmer than a regular model and there is increased tyre roar and engine noise, but at a steady cruise it is easy to forget the amount of performance on offer.

Our verdict on the Renault Megane Renaultsport 225 Cup

Notably improved over the regular 225 model, buyers looking for a civilised hot hatchback with a raw edge should take a closer look at the Megane. While it is not the best in its class in terms of dynamics, it is close to being the best car at combining performance and comfort in a single package.

Despite a competitive purchase price, the costs of the Megane will be relatively high, given the likelihood of a high insurance cost and relatively poor fuel economy. This will be largely in line with many of its rivals however, and is to be expected for a car of this performance.

The Megane uses its space well, with decent leg and headroom for passengers front and rear. The boot is also roomy, and in this respect the 225 Cup loses little of its practicality compared to more humble versions.

The simple interior layout of the Megane makes it an easy car to operate, with straightforward controls for the heating and ventilation. The main controls for the audio system are a little small, but the steering column mounted controls are very easy to use. Between the main instruments is a useful information display, but the speedometer itself is a little confusing thanks to the crowded graduations. One further issue is the placement of some of the minor controls to the right of the driver, which are virtually out of sight and require the driver to peer around the steering wheel to reach them.

Despite the stiffer suspension, the 225 Cup provides good levels of comfort. The seats are supportive, the ride quality is perfectly acceptable and noise levels are well controlled, bar a little road roar from the tyres on some surfaces.

Remote central locking and the use of a key card, removing the need for an ignition barrel, gives this desirable car a high degree of security. Additionally, the 225 Cup is fitted with an alarm system and automatic locking of the doors once on the move.

A high level of safety is a key feature of the Megane, and with a standard compliment of eight airbags, ABS, ESP and Isofix child seat mountings, it stakes a claim as one of the safest cars in the class.

As a pure enthusiasts machine, the 225 Cup falls a little short of some of its rivals. The engine provides superb acceleration, the handling is balanced and enjoyable and the brakes are sharp, but the steering is a little inconsistent, sometimes weighting up unpredictably and following the road too closely. On the other hand it does well when asked to cover long distances with little fuss, although the firm suspension does transmit some road irregularities into the cabin. It makes a good job of combining an every day car with a sporty car, but it excels in neither of these roles.

The Megane makes an excellent family car, despite its high performance. With enough space for four or even five people plus a fair amount of luggage, it can perform this role nearly as well as lesser models. Only the increase in noise levels, firmer ride and increased fuel consumption may exclude it from the shopping list of a family car buyer.

The 225 Cup is likely to be out of reach for most first time buyers, thanks to the relatively high running costs and purchase price. Insurance is likely to be high for the inexperienced, and given the car's power and performance it is unlikely to be a suitable car for novice drivers.

The overall feel of the 225 Cup is positive, and the exterior design and detailing creates a quality feel. Inside some of the plastics do let it down however, so overall it performs relatively well, but not best in class. In image terms it trades on the series of excellent performance hatches released by Renault over a number of years, and has created a credible sub-brand to compete with more established rivals.

With a three-door only configuration, entry for front seat passengers is helped by the long doors that open easily. The high roofline does not require a severe stoop to get in, and only the heavily bolstered seats may require effort from smaller occupants to negotiate. Access to the rear is also good, as the front seats tilt and slide forward, leaving decent legroom to gain entry to the rear. The boot is easy to access thanks to the wide aperture.

Standard fitment on the Megane Cup is a radio/CD unit with six speakers. It also comes with useful fingertip controls that are easier to use than the main controls on the unit itself. The sound quality is good and the reception is also impressive, holding onto radio signals well.

Inside the Megane 225 has a few touches to distinguish it from lesser models, such as the tactile leather covering of the steering wheel and the metal pedal covers, but these are the only items that make the interior feel special. Some of the plastics feel hard and thin, and with the majority of the interior in black or grey it feels very dark.

The Megane's shape does make it a relatively easy car to park, particularly the steep rear window. The thick rear pillars do create a blind spot, but the steering is light at parking speeds making for simple parking.

Ford Focus ST Superb engine and chassis, styling not to all tastes