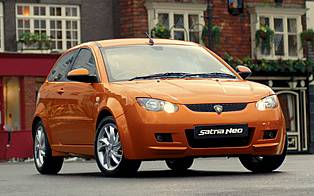 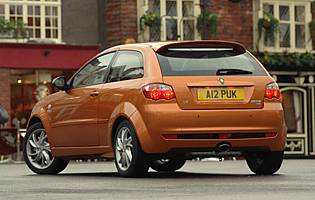 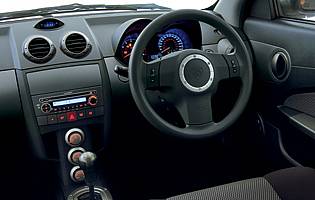 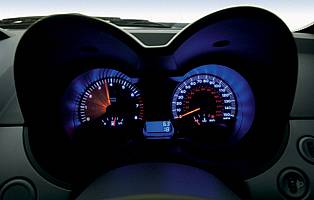 The three-door Satria Neo is Proton's cut-price entry into the highly-competitive UK supermini segment. The original Satria, Proton's first-ever three-door hatchback model, was introduced to the UK in 1994 and discontinued in 2004.

Proton has established a reputation for delivering value-added products to consumers. With input from Lotus, Proton's sister company, the Satria Neo (literally translated as 'new hero') offers an interesting package that includes sleek and sporty exterior design with responsive handling.

Externally the Satria Neo retains some elements from the original Satria's design, and gains a sculpted front hood, stylish front grille, prominent wheel arches and alloy wheels, and a centre exhaust. Strong Far Eastern design influences can be found in the design details, such as the 'tiger-eye' projector headlamps, bee sting aerial and a distinctive silver petrol cap, creating a bold, sleek and desirable exterior. The Satria Neo is a brand-new platform, which delivers extra space inside and improved vehicle dynamics.

Inside the sporty look is continued with bucket-type front sports seats. Levels of standard equipment are pleasingly high, and include a Blaupunkt stereo with steering-wheel mounted controls, air conditioning, electric windows and trip and fuel computer. However, while the overall build quality looks solid enough, the grey plastic finishes look cheap in places.

The Proton Satria Neo is offered with two trim levels, SX and GSX, and two engine sizes - 1.3 and 1.6-litre units. The SX trim is only available on the smaller engine size, which also offers manual transmission only.

Our verdict on the Proton Satria Neo GSX 1.6-litre

The 1.6-litre GSX Satria Neo is an attractive addition to Proton's line-up. The low, sporty exterior is indicative of the ride and handling afforded by Lotus. While the car is capable of offering solid performance at reasonable speeds, limited refinement and comfort levels perhaps make it better suited to shorter, urban journeys. However, potential buyers will note its favourable urban fuel economy, CO2 emissions and range of safety and security features, when compared to its competitors.

The Satria Neo is relatively cheap to buy, however service intervals relatively short. Unusually, fuel economy is better on the larger engined models. The Malaysian manufacturer has a good reputation for reliability, and the Neo is protected by a three-year warranty.

Headroom is limited throughout the cabin, and adult back seat passengers are likely to be cramped. The Satria Neo offers good luggage carrying flexibility, with the rear seatbacks able to be folded to more than double the luggage capacity of the boot. Cup holders and the usual cubbies such as glovebox and side pockets in the front doors means there is sufficient storage capability - but more for the benefit of front passengers.

The controls and displays are simple and effective, while the blue and amber lighting is attractive without being distracting. The Neo offers an array of features more at home in premium models, such as audio controls on the steering wheel, automatic climate control, driver's seatbelt and door ajar warning systems and even cruise control on the automatic variant.

Levels of refinement are a little disappointing. Engine, road and wind noise levels are high, and the firm ride means even relatively small bumps can be felt (and heard) when taken at moderate speeds. Meanwhile, bucket seats in the front offer a combination of comfort and support.

Security measures are comparable with its rivals in the class, with security features including remote central locking, a multi-function alarm with immobiliser and ignition lock protection as well as visible vehicle identification numbers.

The Satria Neo has a reasonable level of active and passive safety measures but is by no means a class-leader in this field. ABS brakes and electronic brakeforce distribution complement the agile chassis to help prevent an accident. In the event of impact, protection measures include side impact protection bars, driver and passenger front airbags, and a collapsible steering column and pedal intrusion system.

Input from Lotus affords the Satria Neo good levels of driving appeal in terms of handling, with decent grip, sharp, responsive steering and reasonably well-contained lean. Many of its rivals in the class offer better speed and acceleration capabilities, but the Neo is quick enough, particularly when worked hard.

The Neo comes in three-door form only and while interior space has been increased over the original Satria model it is still too small in the back for constant family use. The Satria Neo could however serve as a handy second car in support of a larger people carrier or estate.

Novice drivers will likely be attracted to the sporty exterior and purchase price of the Satria Neo, while Proton's reputation for reliability means it should get them from A to B without any fuss and should last them a long time.

Protons tend to be solid, dependable cars. However, even though it owns sports car maker Lotus, Proton doesn't really have any sort of image that buyers would be proud of. The interior and exterior build seems solid enough, and a decent package of standard fit features means the Satria Neo creates a relatively good impression of quality.

Front seat passengers should encounter few problems getting into and out of the Neo, but the lack of rear doors means rear seat passengers fare worse. Usefully, the passenger seat also has a memory function to restore it to its original position after being moved to allow access for rear passengers. The boot opens easily from the exterior and closes firmly. There are also internal boot and fuel release mechanisms for added convenience.

A Blaupunkt radio/CD player with RDS and featuring MP3-compatibility is integrated into the central fascia, which can also be operated by controls usefully mounted on the steering wheel. The system is compatible only with the Satria Neo so cannot be stolen and used in another vehicle.

There is a choice of five external metallic paint colours (grey, orange, blue, red and 'iridescent white') plus one solid colour (red). There are two trim levels, SX and GSX. SX is not available for larger engined models. The grey interior colour scheme is neutral and practical, though the finish of the plastics looks cheap in places.

Parking the Satria Neo is pretty straightforward, with the responsive power steering offering plenty of assistance. In addition, reverse parking sensors are fitted as standard on all models.

A standard space saver spare wheel plus tool kit is mounted under the boot floor.