Overall design is timeless and distinctive 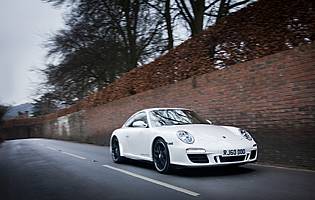 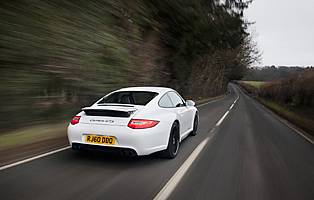 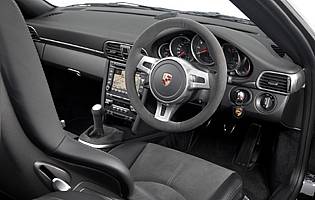 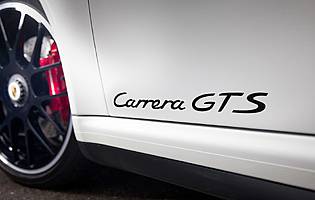 Porsche's iconic 911 model has remained at the pinnacle of the sports car sector for decades, thanks to a sound basic formula and a consistent programme of updates and improvements. Porsche's desire to produce a car for every need and whim has resulted in the GTS, a variant seen elsewhere in the Porsche range.

The 997-series Porsche 911 is already an exceptional performance car, offering the unmistakable silhouette which has remained a firm favourite with sports car buyers without looking outdated. A series of wheel and exterior styling packages allow further tailoring, but the inherent proportions and details are simple and attractive, accounting for the car's longevity.

The GTS model sits above the Carrera and Carrera S but below the GT3 in the range of naturally aspirated models, essentially designed as a high specification road version as opposed to the track-oriented GT3. The GTS uses the wide-body that appears on the four-wheel drive Carrera 4 model, giving it a 44mm wider body and an increased track for better traction and grip. However, despite sharing the body of the four-wheel drive 911 the GTS sticks with the traditional rear-wheel drive layout.

Visually the GTS is distinguished from other 911s through a number of small but significant differences. The most obvious of these is the amount of black detailing, regardless of the main body colour. The 19-inch centre-locking wheels have black spokes and the GTS also wears a Sport Design bodykit, with side skirts plus front and rear aprons, all finished in black too.

Underneath the GTS uses the familiar 3.8-litre six-cylinder engine with its pistons horizontally opposed, giving the distinct character and charm which has become a huge part of the 911's appeal. In this iteration it produces 402bhp, 17bhp more than the Carrera S and changes to the intake system have increased torque levels at low revs also.

Our verdict on the Porsche 911 GTS Coupe

The basic template of the 911 has been well-proven and its reputation amongst enthusiasts is virtually bulletproof, so the GTS performs a role of simply trying to appeal to a particular type of customer. The visual changes are down to personal taste and are colour-sensitive, while the mechanical changes offer a useful improvement over its closest rival - the 911 Carrera S.

Running costs for the 911 are likely to be high. Fuel economy is low in actual terms although choosing the PDK gearbox does help to achieve good figures compared to rivals. Insurance and running costs will be at the higher end of the scale, while servicing isn't cheap on a car like this, but inevitably so on a car of this nature.

Front seat passengers have plenty of room in all directions, and are unlikely to have any quibbles. In the rear space is more restricted, though the seats are suitable for average sized adults on short journeys. Storage space in the cabin is relatively good, although the front boot is only suitable for carrying a couple of soft bags.

The cabin layout of all 911s has become more sophisticated as the specification has improved, but in incorporating necessities such as sat-nav, telephone and high-spec audio something of the simplicity has been lost. The dial layout remains crystal clear and attractive however.

The GTS does a good job of delivering respectable comfort levels. The seats are superb, firm and supportive even over long distances. Noise levels are quite restrained, the engine subsiding when on a light throttle. The standard sports exhaust comes with a dash-mounted button to increase sound levels when required too. The ride is firm, but not uncomfortably so, only the worst potholes causing a disturbance in the cabin.

With the sophisticated Porsche Active Stability Management system fitted the 911 in all forms provides very high levels of active safety, while the suite of airbags and tough bodyshell are reassuring should the worst happen.

The GTS is one of the more powerful naturally-aspirated 911s available, and with the more sporting set up to the suspension it is perhaps a good compromise for a road-biased but very sporting car. The flexible six-cylinder engine is as pleasurable as always to use, and with the optional of conventional paddles for the PDK gearbox rather than the previous awkward button arrangement the driver can concentrate on enjoying the powerful engine, strong brakes and sensitive steering. It can also tick along in heavy traffic without demanding much or tiring out the driver, which is something the more highly-strung GT3 model might not be capable of.

The 911 is not an ideal family car, although it could carry two adults and children. Insufficient boot space would be the key issue, as is access to the rear seats.

The 911 is much too powerful and expensive for a first car, even its most humble of guises.

For a sports car, the 911 is easy to get into. The doors are long and open wide, and although the seats are low set, it is not a long drop down into them. Access to the rear does require the seat to be slid forward, which takes a few seconds if electric seats are fitted.

With the optional Bose stereo system fitted, the 911 boasts a superb sound system. Radio, CDs and MP3 CDs can be played, and the sound quality is of a high standard. Steering wheel controls make it easy to operate, and unlike many cars these controls are small so they do not interfere during spirited driving.

An increasing number of colour choices are available for the 911, but choice is even more important with the GTS due to the black wheels and black detail to the body kit. The trim also comes with a mass of personalisation options including trim materials and colours.

Because of its unique shape, parking the 911 can be a little tricky. Visibility all round is generally good, but the sloping rear can make it difficult to judge. However, parking sensors are available as an option.