New nose transforms the look of the 508 SW 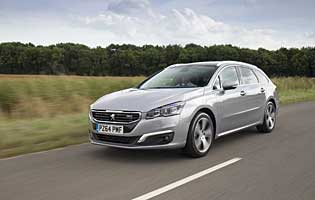 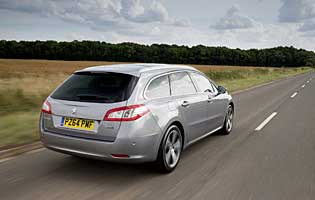 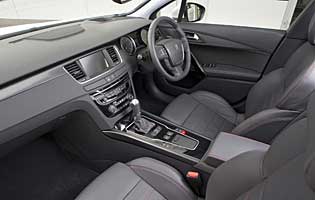 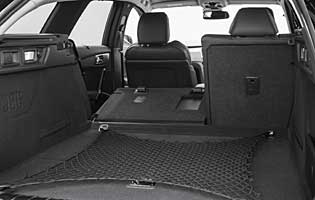 Even with the march of SUVs and crossovers the family estate remains an important offering in any manufacturer's line up, and for many years cars like these have been a cornerstone of the Peugeot range. Some three years after the initial launch of the 508 Peugeot has introduced a revised model, benefitting from the latest engine line up and details changes inside and out.

The 508 is an important car for Peugeot, for although it sells fewer than its smaller offerings it follows a long line of successful family cars for the brand, both in the UK and throughout Europe. After a successful introduction in 2011 in both saloon and estate-like SW guise, the French firm has introduced an updated version with many new features to increase its appeal.

On the outside the most obvious change is the introduction a new nose treatment, incorporating a more aggressive grille with bigger headlights and the return of the Peugeot 'lion' to the centre of the grille. New bumpers front and rear complete the changes, and the overall effect is to give the 508 more presence on the road.

Inside the biggest change is the introduction of the touchscreen system already used in more recent Peugeot models, replacing the outdated and somewhat flawed push button system used previously. Almost all the major functions are operated via the screen, although there are menu buttons below and additional controls on the steering wheel for alternative operation.

Mechanically the 508 remains largely as before, although the 508 benefits from the Blue HDi unit, designed to offer a high power output for impressive performance but also keeping the crucial emissions figure as low as possible. This engine provides comparable performance to the larger 2.2-litre unit but with economy and emissions performance close to that provided by the smaller 1.6-litre diesel option.

Our verdict on the Peugeot 508 SW Allure Blue HDi

The basics of a successful estate car are space and versatility, but the revised 508 offers a great deal more than that. It's revised looks are a step forward and add to its appeal, while the Blue HDi diesel option makes it remarkably fuel efficient for something of this size. The updated interior is an improvement too, giving the 508 SW a strong set of attributes overall.

Where the 508 SW scores highly is in respect of fuel economy, and the Blue HDi model has very impressive fuel consumption and emissions performance. That not only means low fuel bills but also low vehicle excise duty.

The 508 SW is makes good use of its generous dimensions to give excellent head and legroom all round, and the amount of legroom on offer for rear seat passengers is particularly impressive. Even though the touchscreen has freed up space between the front seats, the space hasn't been fully utilised as the storage box awkwardly opens to one side. Boot space is very impressive however, with a sensibly-shaped load area and a luggage net to help secure smaller items.

The layout of the 508 is broadly as before, bar the addition of the new touchscreen system. That means the centre console is now cleaner and easier to understand, with clearly labelled buttons for the various sub-menus. Operating the touchscreen itself is easy when stationary but less so on the move as it requires a little stretch. The head-up display system where fitted is excellent however, and is a useful safety feature.

Even on the relatively large alloy wheels fitted to this Allure model don't hurt the 508 SW's smooth ride, which is a big contributor to the overall refinement levels. The seats are supportive and the driving position will suit most, and noise levels are kept well in check too.

All 508 SW models are fitted with an approved alarm, deadlocks and an immobiliser, while all models fitted with alloy wheels have locking bolts for additional security.

All 508 SW models have a comprehensive suite of safety systems including six airbags, ESP, ABS, EBA and Dynamic Stability Control. In addition the optional head-up display system is a useful safety boost and not commonly available in this segment.

The 508 SW even in Allure form is designed to be comfortable rather than sporty but nevertheless it manages to strike a good balance between the two. The Blue HDi diesel engine is a fraction noisy from cold but warms quickly and provides impressive torque and strong acceleration with little fuss. The steering is light and easy although the wheel would benefit from a greater range of adjustment.

The 508 SW is an ideal family machine, chiefly due to the generous space on offer both for passengers and luggage. The optional full-length panoramic glass roof is also a useful choice, available on SW models only, which does a great deal to boost the feeling of space.

It is unlikely that new car drivers will consider the 508 SW despite its qualities, and although it is easy to drive the overall length might cause issues for the inexperienced.

A crucial area for any car competing in this segment is quality, and the 508 SW manages to provide this both in terms of the standard of construction and the sense of perceived luxury to its occupants. The 508's image is also bolstered by this alongside the stylish and distinctive design, allowing it to punch above its weight in terms of the competition.

With long doors both front and rear the 508 SW offers good sized apertures for people getting into the car, and the taller roofline compared to the saloon gives it an extra advantage in respect of getting into the rear seats. The boot is easy to access with a wide tailgate that can be opened remotely if specified.

All 508 SW models comes with a CD/tuner as well as USB input and Bluetooth and the latest touchscreen system is a big improvement on the outgoing system. The only issue is that its size and distance from the driver can make it fiddly to use on the move, although the auxiliary controls mitigate this somewhat.

Lighter colours tend not to suit the 508 SW all that well, possibly because the big Peugeot is well liked by the taxi fraternity. Darker colours however make the most of the new headlights and give it a classy feel. On the inside the finish is mostly grey, but the more elaborate trims help to lift the cabin overall.

The 508 SW's nose slopes away out of sight which can make parking a little tricky. However, a rear parking aid is available on all but the entry-level model, while Allure and GT models can be specified with a parallel parking guide which will inform the driver of the suitability of a space alongside the car.