Revised 307 is distinguished by bigger front grille and new headlights 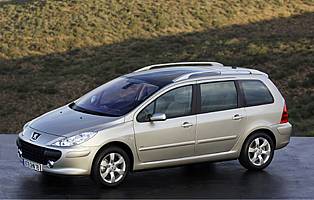 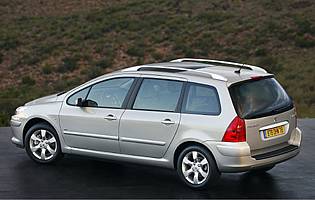 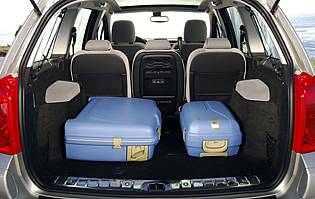 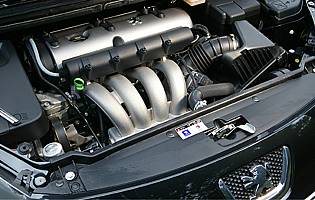 Already established in a highly competitive market, the 307 SW underwent a number of revisions alongside the hatchback and estate models. Changes inside and out aimed to keep the Peugeot competitive, including improved equipment levels and a wider choice of engines.

The SW is the unique car in the 307 range, as most of its rivals offer a conventional MPV or estate car rather than a combination of both. Using a stretched version of the hatchback platform it offers increased interior space without the high roof of an MPV, while the multiple seating options give it more passenger space than an estate car.

The second row of seats in the SW are individual, rather than a bench as in other versions, which gives far greater versatility. Each seat can be folded or moved forwards and backwards, allowing various combinations of passengers and luggage. Additionally, a sixth and seventh seat can be purchased and fitted in the rear of the car.

All 307 models have a new, shorter bonnet, larger headlamps with improved power, a single air intake and revised taillights at the rear. The SW version is also available in three new colours, and also comes with a panoramic glass roof as standard. One further change with the revised 307 SW model is the availability of the 2.0-litre petrol engine, with a power output of 140bhp.

On the inside Peugeot has increased comfort and equipment levels. All versions get dual-zone automatic air conditioning, allowing separate temperature settings for both front passengers. Front seat occupants have a seat belt fastening buzzer, the standard fit RDS radio has been revised and Bluetooth phone connectivity is an option. Revised instrument graphics are present across the range.

Because of its layout, the 307 SW offers many of the advantages found in conventional hatchbacks, MPVs and estates while remaining as usable as an ordinary car. For many this versatility will put it ahead of rivals, but the age of the vehicle underneath shows in the cabin and the driving experience. More modern competitors can offer better value and a more rewarding ownership experience.

Thanks to the efficient diesel engine, running costs for the 307 SW should be relatively small. The good value initial purchase price is matched by a low insurance grouping. As a vehicle for every day and every occasion, the 307 SW could fill the role of two conventional cars, offering a substantial cost reduction.

The use of individual rear seats in the second and third rows (where fitted) is the key to the 307 SW's increased practicality. Both rows can therefore be folded or adjusted to alter the balance between passenger and luggage space. Additionally, the second row can be moved rearwards to give a large amount of room behind the front seats. If the third row of seats is fitted, they can also be folded or removed for extra practicality, although the additional cost involved is undesirable.

A large rev counter and speedometer dominate the instrument layout on the 307, with two smaller dials and an information panel set between them. The instruments are easy to read and stylish to look at. With the optional satellite navigation fitted, a colour screen is mounted at the base of the windscreen, which although easy to see, can be distracting for the driver as it falls into the natural line of sight. The rest of the controls are large, clearly labelled and easy to use, although the controls for models fitted with satellite navigation can be fiddly to use.

For a car targeted at carrying passengers, the 307 SW is a respectable performer. Front seat passengers fair best, although the second row provides sufficient comfort. The optional third row is best reserved for children, although adults could use them for shorter periods of time. The ride quality, airy cabin and decent ventilation system help to keep all passengers in a comfortable state.

All revised 307 models come with deadlocks and an immobiliser as standard. Clever ideas like automatic locking if the car is left unlocked and unopened for 30 seconds make the 307 a secure car to own. It also benefits from a discreet exterior, which is less likely to attract unwanted attention.

The entire revised 307 range is fitted with comprehensive safety equipment, including six airbags, front seats with seat belt pre-tensioners and ABS. The revised 307 also gets improved headlamps as standard, contributing to active safety with improved visibility.

Often noted for the strong driving appeal of its cars, the 307 SW is one of few vehicles that can carry more than five passengers yet is still good to drive. In diesel form the high torque output delivers impressive and effortless acceleration, although the gearshift is a little imprecise. The ride and handling balance is good, with poor road surfaces causing little disturbance in the cabin and demanding B-roads are despatched with ease. The well-weighted steering and respectable feel makes it ease to drive the 307 with enthusiasm. With a full load of passengers or luggage aboard the dynamics will change slightly, but a keen driver would accept the compromise that the 307 delivers.

Ideally suited to the family car role, the 307 SW's numerous seat and stowage options give it the flexibility to cope with the various demands of a family. Elements like the good ventilation and full-length sunroof also increase comfort levels, making it an excellent choice for a family.

First time car buyers would find little to trouble them with the 307 SW, though a car of this size and versatility is unlikely to be fully utilised by a new driver. Running costs will be acceptable, and the modest insurance groupings will be within the reach of some drivers without a no-claims bonus.

The specification of the SE model adds to its quality feel, and from the driver's seat the use of good quality cloth and a perforated leather steering wheel make the interior feel more special. Some of the minor controls do feel less impressive, but the overall impression is positive. The 307 SW's image is one of a 'lifestyle' car rather than a true estate or MPV, as it falls somewhere between these two traditional vehicle types. It is certainly more stylish than many of its rivals.

A number of features unique to the SW model give it an advantage over the conventional hatchback version. An increase in the overall length of the vehicle gives additional room at the back, while the second row of seats can be folded and moved in a number of ways, making it easier for passengers to climb aboard. A reasonably high roofline also reduces the risk of bumped heads upon entry.

The SE model benefits from a five-CD disc changer, which is simple to operate and securely mounted in the dashboard. The main controls for the stereo are quite small and can be difficult to operate, though this is offset by the excellent steering column controls. The sound quality is impressive, although the standard system does struggle at higher speeds with the roof folded.

Both the S and SE models are available with leather upholstery, which gives the interior a lift and a feeling of quality. Door cappings, the dashboard and the seats are finished in either red or black hide, something that few of its rivals can offer. The rest of the interior is finished in decent quality plastic, most of which is black in colour.

With a vertical rear window and a generous glass area, the 307 SW is straightforward to park. A higher seating position than the regular hatchback model also makes the SW version easier to park. Parking sensors are only available as an option however.

Renault Megane Sport Tourer Good to drive and decent sized load bay, but not as versatile

Ford Focus C-Max Roomy and good to drive, but no seven seat option