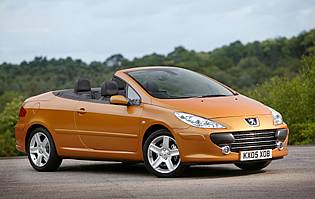 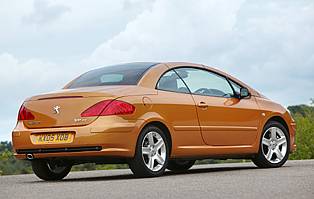 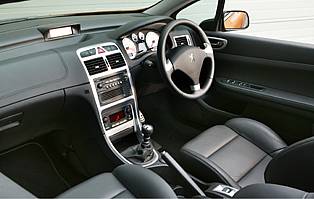 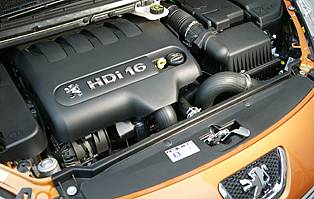 One of the first mainstream cars of its size to use a metal folding roof instead of a fabric item, Peugeot's revised for 2005 307 CC has received important interior and exterior upgrades, plus the French firm's 2.0-litre HDi diesel engine for the first time.

Thanks to the improved security and noise insulation afforded by coupe-cabriolets, this sector is becoming ever more popular. The original 307 CC took a generous slice of the market, yet for 2005 it received a host of improvements to bring it into line with the conventional 307 hatchback and SW models.

From the outside the 307 CC now has a more prominent front grille, deeper and wider and with chrome detailing and flanked by a pair of fog lights. The bonnet is now made from aluminium for lower weight, and the front wings are now made of a plastic composite for improved damage resistance. At the rear the taillights are now LED-effect for a sharper look and improved visibility.

On the inside Peugeot has increased comfort and equipment levels. All versions get dual-zone automatic air conditioning, allowing separate temperature settings for both front passengers. Front seat occupants have a seat belt fastening buzzer, the standard fit RDS radio has been revised and Bluetooth phone connectivity is available as an option. Revised instrument graphics are present across the range.

Peugeot has shown faith in its diesel engine range by introducing the 2.0-litre HDi diesel on the 307 CC, which is still an option only offered by a few manufacturers. The engine offers similar performance to the 2.0-litre petrol unit but with superior fuel economy and the likelihood of lower running costs.

Our verdict on the Peugeot 307 CC HDi SE

In a small field of rivals offering four seats and a folding metal roof, the 307 CC is a convincing cabriolet. In diesel form it offers everyday usability, and the hood mechanism is simple to operate. The initial high purchase price and the slightly cramped rear seats do count against it, but buyers in this market should give the 307 CC serious consideration.

In all other respects the 307 CC in diesel form represents a cost efficient convertible car, with fuel economy figures and reasonable insurance costs. The only demerit is the initial purchase price, which in the case of the SE is comfortably over the GBP20,000 mark.

The 307 CC provides respectable interior space for passengers and luggage, considering its convertible roof has a significant impact on boot space. Head and legroom is respectable roof up or down, although rear seat passengers will want to avoid long journeys. Boot space with the roof up is a good 350 litres, and this reduces by a reasonable amount to 204 litres with the roof folded down.

A large rev counter and speedometer dominate the instrument layout on the 307, with two smaller dials and an information panel set between them. The instruments are easy to read and stylish to look at. With the optional satellite navigation fitted, a colour screen is mounted at the base of the windscreen, which although easy to see, can be distracting for the driver. The rest of the controls are large, clearly labelled and easy to use, although the controls for models fitted with satellite navigation can be fiddly to use.

Supportive front seats provide good comfort for passengers, although comfort for rear seat passengers is compromised by the amount of room available and the upright nature of the seat backs. The compliant ride is another factor that improves comfort levels, and passengers are protected from excessive wind intrusion with the roof down.

A standard alarm and immobiliser on the SE model promises good security, and this can be adjusted to operate even with the roof down. The metal folding roof also provides much superior protection to the conventional fabric roof design.

The whole of the revised 307 range is fitted with comprehensive safety equipment, including six airbags, front seats with seat belt pre-tensioners and ABS. In the event of the vehicle turning over, a pair of rollover hoops pop up from behind the rear seats to prevent injury to passengers.

Although the 307 CC carries a weight penalty and is less rigid than the conventional hatchback, it still appeals to a keen driver. The steering is accurate and provides decent feedback, while the ride is good. Relatively soft suspension prevents bumps upsetting passengers, although rougher roads do highlight the lack of a fixed roof. The diesel engine provides more than enough performance, while noise levels are pleasingly low.

A family of four with two smaller children would find the 307 CC to be an acceptable family car, although luggage for four could not be carried with the roof folded down. Older or taller children may find too little room in the rear seats - especially on longer journeys.

The 307 CC would make an attractive first car for many drivers, as it is easy to drive and would deliver good running costs thanks to its diesel engine. An insurance grouping of 11 is relatively high however, and the initial purchase price would be beyond the means of most first-time motorists.

In terms of image the 307 CC is a strong contender, as folding metal roof convertibles are seen as even more desirable than canvas roof versions, which are already popular. The high specification of the SE model adds to its quality feel, and from the driver's seat the use of leather and aluminium plus the white instrument dials make the interior feel special. Some of the minor controls do feel less impressive, but the overall impression is positive.

Considering the complexity of the car's roof, access to the boot and seating areas is simple. Only passengers getting into the rear seats with the roof up may find it difficult, although the large doors are a help.

The SE model benefits from a five CD autochanger. The autochanger is simple to operate and securely mounted in the dashboard. The main controls for the stereo are quite small and may be difficult to operate, though this is offset by the excellent steering column controls. The sound quality is impressive, although the standard system does struggle at higher speeds with the roof folded.

Both the S and SE models are available with leather upholstery, which gives the interior a lift and a feeling of quality. Door cappings, the dashboard and the seats are finished in either red or black hide, something that few of its rivals can offer. The rest of the interior is finished in decent quality plastic, most of which is black in colour.

Even with the roof up, parking the 307 CC is easy thanks to good front and rear visibility. The standard rear parking sensors are a useful safety net, and with the roof folded the lack of rear pillars makes reversing a breeze.

Space saver spare wheel mounted in a cage under the boot.

Saab 9-3 Convertible Attractive and well built but no diesel option, expensive to buy

Audi A4 Cabriolet High quality car with strong image, although a pricey choice