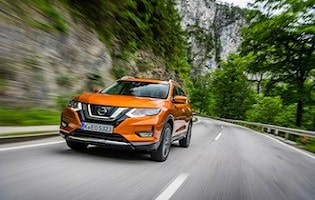 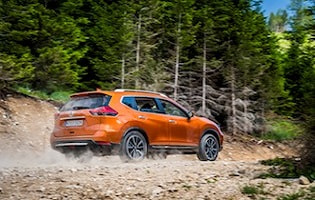 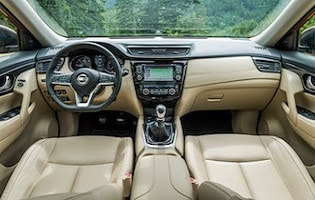 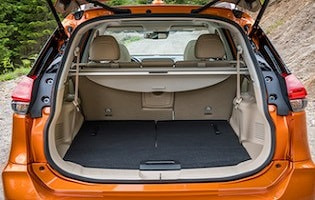 According to Nissan, the X-Trail is the best-selling SUV in the world. It goes without saying, then, that this latest model is an incredibly important vehicle for the Japanese manufacturer and one it will want to get right. With the option of seven seats, an interior that feels solidly built and a generally impressive drive, it seems like Nissan is on the right track.

Compared with the outgoing X-Trail, the new model doesn't look remarkably different. The revisions to the exterior are subtle, with a larger 'V-motion' grille, new headlights and a greater level of chrome brightwork around the body – all of which help to give the new X-Trail a slightly more upmarket appearance.

The cabin has also been subjected to minor revisions. There's a new premium Bose stereo system on top-flight models, and a new steering wheel design helps to improve the X-Trail's ergonomics. While the Nissan's interior may not be the last word in luxury, it's still a nice place to be, and will no doubt be able to stand up to the wear and tear of family life.

As a family vehicle, the X-Trail makes an incredibly strong case for itself. Nissan sells the SUV in either five- or seven-seat configurations, meaning it makes for the ideal school run wagon. Opting for the seven-seater does affect boot capacity somewhat, with 445 litres of space compared with the five-seater's 565-litre luggage compartment.

From 2018, Nissan will also be offering the X-Trail with its ProPilot autonomous technology. Available with cars equipped with the XTronic CVT transmission, ProPilot combines lane keep assist, intelligent cruise control and traffic jam pilot to control the steering, acceleration and braking in a single lane on highways during heavy traffic and open-road cruising.

Our verdict on the Nissan X-Trail 2.0 Tekna

Nissan has pitched the new X-Trail as the ideal vehicle for an active and outdoorsy family, and it's not far wide of the mark. There's loads of space inside, the 2.0-litre diesel engine is more than powerful and it rides incredibly well over rough surfaces. It might not be the most exciting car in the world, but it's unlikely to put a foot wrong.

Prices for the new Nissan X-Trail start at £23,385 for the entry-level Visia model with a 1.6-litre petrol engine, and move up to £38,565 for the top-level Tekna model with the most powerful diesel unit, seven seats and the XTronic automatic gearbox.

The Nissan X-Trail is available in both five- and seven-seat configurations, meaning it's an ideal proposition for a young family. Sure, adults will likely find they get uncomfortable very quickly in the third-row seats, but for children they should be more than comfortable. As far as luggage space is concerned, the X-Trail features a 565-litre boot when configured as a five-seater. This space can be increased to 1,996 litres with the second row seats folded down.

The latest X-Trail features a redesigned steering wheel that houses controls for the infotainment system and cruise control. Although the wheel may appear rather busy at first, you quickly adjust to it and find that it actually works really well. The rest of the X-Trail's controls can be found on the dash, and all of them are within easy reach of the driver.

As far as comfort levels were concerned, we had no complaints in the X-Trail. The ride is firm enough to limit body roll through the corners, but not so stiff that it crashes over bumps. On a brief off-road section, the X-Trail sailed over ruts and lumps in the road, with only the larger imperfections in the road surface making themselves felt in the cabin.

You won't be left with too many concerns about the X-Trail's security. As with the vast majority of modern cars, the Nissan comes with remote central locking, an immobiliser and a Thatcham alarm system as standard. As Nissan isn't traditionally seen as a high-end brand, the X-Trail shouldn't attract too much unwanted attention when left parked on the street.

Despite its size, the X-Trail iss actually rather impressive out on the road. It manages to stay relatively flat through the corners, without being so stiff that its ride is compromised. The 2.0-litre, 175bhp diesel engine that powered our test car is rather punchy, and gets the car up to speed in a respectable fashion. One slight issue we did have with the X-Trail was its manual gearbox, which felt rather vague and woolly.

While the X-Trail is incredibly difficult to recommend as a first car, as a family vehicle it would be ideal. Thanks to the option of a seven-seat layout, there's plenty of space for children and their friends, meaning the school run will be completed with ease. The 565-litre boot will also come in use on family holidays, and for completing the weekly food shop.

There's no way the Nissan X-Trail would make for a sensible first car for a newly-licenced driver. It's not only fairly expensive, it's also rather large – and would likely be an intimidating vehicle for an inexperienced driver to get behind the wheel of. Of all the vehicles in the Nissan range, the Micra makes much more sense as a first car.

Compared with its predecessor, the new X-Trail doesn't look too different really. There have been some subtle revisions to the exterior including the new 'V-motion' grille that also appears on the latest Qashqai, as well as additional chrome brightwork on higher-specification models. The interior has also been lightly updated, with a new steering wheel being the most obvious addition. While the changes may be minor, they help keep the X-Trail looking fresh.

With its conventional five-door layout and wide door apertures, getting in and out of the X-Trail is never going to be too much of a problem. Even though it is a fairly tall vehicle, you don't have to lift yourself up far at all to access the cabin, and children shouldn't find getting in a problem at all. Thanks to a hands-free tailgate, accessing the boot when your hands are full is an incredibly easy process.

Our test vehicle was fitted with a high-end Bose sound system, which is a standard feature on the top-of-the-line Tekna model. The eight-speaker system has been tuned specially to suit the acoustics of the X-Trail, and the sound quality is impressive to say the least. The X-Trail features DAB radio as standard across the range, while the NissanConnect touchscreen infotainment system with satellite navigation is standard on N-Connecta models and above.

As well as the regular blacks, whites, silvers and greys, Nissan has also introduced four new colours to the X-Trail range. These are Monarch Orange, Palatial Ruby, Sapphire Blue and Picador Brown. While the more subdued shades of silver and grey might hold their value better in the long run, Monarch Orange and Palatial Ruby are particularly eye-catching, and really help the X-Trail stand out from the crowd. Trim levels are: Visia, Acenta, N-Connecta and Tekna.

Although the X-Trail isn't exactly the smallest car in the world, the decent levels of visibility afforded by its raised driving position mean it isn't terribly difficult to park. For that added peace of mind, the X-Trail also features parking sensors that will warn the driver if they are about to bump into any unseen hazards. To make proceedings even easier, the X-Trail is also available with Intelligent Park Assist, which can steer the car into a parallel parking bay all by itself.