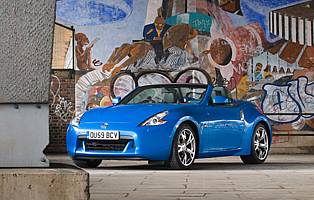 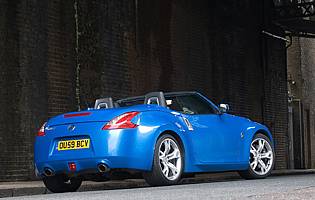 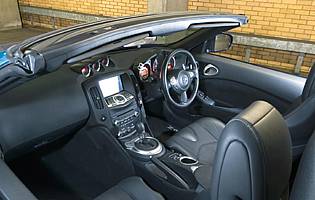 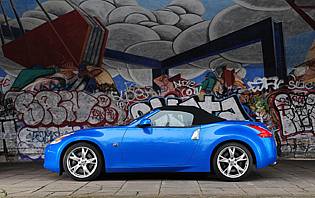 It was only a matter of time before a drop-top version of Nissan's 370Z appeared. Following closely on the heels of the coupe version, this Roadster offers buyers a powered fabric roof and the same level of performance as the coupe that has already pleased the critics.

It all stared with the 350Z, an impressive and critically acclaimed rebirth of Nissan's famous 'Z' performance brand. Its replacement, the 370Z builds on that ethos, honing the much loved qualities of the previous model and improving where it fell short.

There's no question that the 370Z is a car that will appeal to your inner extrovert. With its boomerang lights, sweeping bonnet lines and Z-badge indicators, the car is full of clever visual details. The technical elements a more than superficial though, as the driving experience is also improved through a thoroughly redeveloped chassis and engine package.

Posting near-identical numbers to its tin-top relative, the 370Z Roadster delivers a traditional wind-in-the-hair experience. Ease of use has been an important factor here; one button press is all that's required to retract the car's fabric roof. And with it out of the way you can still enjoy a civilised conversation at sensible speeds - and listen to Nissan's impressive V6 engine.

And it's this 3.7-litre V6 that is at the heart of the action. With its variable valve and lift technology, offers a smooth power delivery. The standard six-speed manual gearbox delivers power to the rear wheels through a carbon fibre prop shaft and, for the first time, the Z-Car is available with an automatic: seven-speed with paddle shifters. Another first is Nissan's Synchro Rev Match system, which automatically blips the throttle on downshifts to ensure a smoother change every time.

With a footprint fractionally smaller than the car it replaced, Nissan took the bold step with the 370Z and made it a sharper, more focused proposition than the older 350Z. The end result is an impressive sports car capable of rivalling the best from Europe for thrills, performance and refinement. In Roadster form the car adds a new, popular dimension. Practicality is barely compromised, while occupants are treated to a pleasing set of aural sensations - that 3.7-litre V6 is willing and capable unit.

Compared to some of its German rivals, the 370Z Roadster represents a lot of power and equipment for the modest financial outlay. Insurance groupings, fuel bills and tyre costs will not be cheap, however Nissan's traditional strong build quality should ensure reliability.

Although not the most practical of vehicles, Nissan has done its level best with the 370Z Roadster. Luggage capacity is reasonable and there are improvements in the cabin area. Don't expect to carry much more than weekend luggage in the convertible, though.

The car's instrument binnacle is well set up and clear to read with a selection of dials and gauges for fuel and temperature. The centre console is equally well designed and easy to navigate. The raised transmission tunnel places the gear lever easily to hand. The various switches all feel chunky and robust, too.

Road noise is present but the car's slippery shape suppresses wind noise well. The driving position is adjustable but there's no reach adjustable steering - on rake. The cabin might be a snug environment for two adults but, with the roof down, it never feels cramped.

Keyless entry is standard but, with its fabric roof, there's always the remote threat of vandalism. The comprehensive security system with alarm and immobiliser should protect the car from most threats, though.

With only two occupants to look after, Nissan has been able to focus its attentions, resulting in dual-stage front airbags, seat mounted side-impact and roof-mounted curtain side airbags. The model also features active head restraints, an energy absorbing steering column and a tyre pressure monitoring system as standard. The switchable traction control also helps keep the power in check, but can be disabled for track use.

Boasting a willing and powerful V6 engine plus a finely balanced chassis, the 370Z is an enjoyable car to drive. The car's manual gear change is weighty and precise, while the automatic box is smooth and great for cruising. The firm ride is par for the course for a car in this sector, yet does help the 370Z Roadster corner well with minimal roll.

As you would expect, two-seats-only limits the 370Z's family potential. Weekend fun for one young passenger will be the limit, while luggage capacity also trails that of a conventional family hatch.

Too expensive and powerful for the vast majority of young drivers to buy or run, its performance would also make it unsuitable for the novice driver.

Boasting noticeable improvements everywhere over the old 350Z, the 370Z line-up looks and feels like a more premium product. The 370Z is also likely to build on the solid reputation of its predecessor thanks to great looks and impressive performance.

With the roof up the 370Z Roadster is no different from the coupe version, which means you will need to be reasonably agile to get in and out of the low-slung seating position. The car's doors are long, bulky and need to be opened to a wide angle for easy entry. With the roof down access is, predictable, much easier.

You're not short of music in the 370Z Roadster, as the car's standard sound system is a powerful piece of kit. Upgrades are possible, with the likes of a hard disc storage system and the now de rigour Bluetooth phone connection and sat-nav available.

With the roof up your view rearwards is a little restricted - and par for the course in a car like this. A few days with the car should have you feeling more confident, though. It's a different matter with the roof down as your visibility is greatly increased.

Porsche Boxster Benchmark for roadster performance in this class