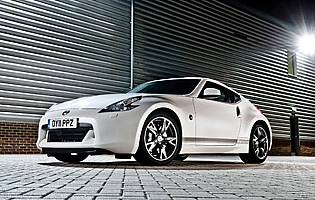 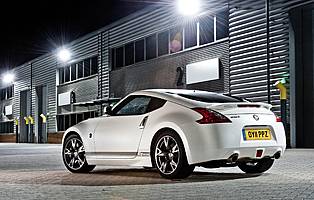 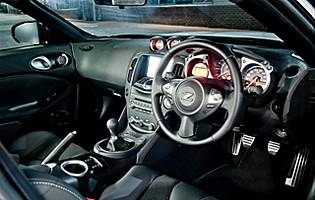 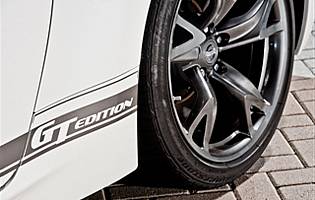 With the 370Z Coupe and Roadster models already providing a high performance choice in the Nissan range, a special edition GT model has been introduced with a number of significant changes. Mechanical and specification enhancements are completed by subtle visual changes to distinguish from the standard models and further increase its appeal.

With some high profile and desirable competition, the 370Z has its work cut out to tempt buyers away from the more obvious sports car brands. The GT version builds on the attractive 370Z shape with the addition of large 19-inch alloy wheels as standard, a choice of three exterior colours one of which is exclusive to the GT version and distinctive grey stripes along the flanks.

Of greater interest to keen drivers will be the changes made to the suspension settings. Revisions have been made by the Nissan Technical Centre based in the UK, with particular attention paid to damper settings in order to better cope with the demanding nature of UK roads and increase comfort without sacrificing roadholding and handling.

The potent 3.7-litre V6 engine remains unchanged while the six-speed manual gearbox delivers power to the rear wheels through a carbon fibre prop shaft, with the option of a seven-speed automatic with manual paddle shift over-ride. The automatic option now comes with winter mode which puts the transmission in second gear when pulling away to minimise wheel slip. The impressive Synchro Rev Match system is also available with both transmissions, blipping the throttle on downshifts to ensure a precision change every time.

Elsewhere a reversing camera now comes as standard with the Premium Connect satellite navigation system, as well as a tyre pressure monitoring system for added safety. Nissan claims refinement has also been improved with increased underbody sound insulation to reduce transfer of noise into the cabin.

Our verdict on the Nissan 370Z GT coupe

The standard 370Z is still an impressive car but the revisions made to create the GT version have improved its manners, increased comfort in a small but significant way and boosted the thrill factor. In such a tough segment the 370Z has its work cut out, but the GT is enough of an improvement that it stands comparison with the best in the class.

Always a value for money proposition, the 370Z GT offers a lot of power and equipment for the outlay. Insurance groupings, fuel bills and tyre costs will not be cheap, however Nissan's traditional strong build quality should ensure reliability.

Not the most practical of vehicles, Nissan has done its level best to improve practicality. The rear cross member has been relocated under the boot floor to increase luggage capacity and there's better storage in the cabin area, too, with trays behind the seats and a cubby hole between them and in the dash if sat-nav is not specified.

Featuring the now traditional Z-car row of extraneous dials across the top of the dash centre, the 370Z driver has no shortage of information to sift through. The instrument binnacle is clear to read with a selection of dials and light meters for fuel and temperature. The centre console is equally well designed and easy to navigate. The raised transmission tunnel places the gear lever perfectly and the accelerator pedal has been changed to a floor hinged assembly for greater control. Knobs and switches all feel chunky and robust, too.

Ride quality in the GT is improved over the current 370Z, although it remains a firmly-spring car. Road noise does tend to penetrate the rear and bounce around the hatch area but the slippery shape suppresses wind noise well. The driving position is very adjustable with the mission of reach adjustable steering, and the driver's seat is separately contoured to offer greater support.

A full security system with alarm and immobiliser protects this highly desirable car. Keyless entry is standard and, although there's a small amount of secure storage up front, items in the boot will be on full display.

With only two occupants to look after, Nissan has been able to focus its attention with dual-stage front airbags, seat mounted side-impact and roof-mounted curtain side airbags. There are also features active head restraints, an energy absorbing steering column and a tyre pressure monitoring system as standard. Advanced traction control also helps keep the power in check, but can be switched off for track use.

The 370Z is designed to be a true driver's car, and the powerful V6 engine, short-throw gearchange and rear-wheel drive layout all contribute to an enjoyable driving experience. The suspension changes have smoothed out some of the rougher edges in the ride, which has made it more controlled when pressing on through a series of bends. With the strong performance and exciting exhaust note too, there is clearly a great deal to enjoy.

Two-seats-only limits the 370Z's family potential. Weekend fun for one young passenger will be the limit.

Although good value for money, the 370Z will be too expensive and powerful for the vast majority of young drivers to buy or run. Its performance would also make it unsuitable for the novice driver.

While not at the highest level of quality such as that from Porsche or Audi rivals, the 370Z does meet the standards you would expect from a car at this price. As well as looking smart the cabin is sturdy in construction and looks hard-wearing. In terms of image the 370Z is very strong, helped by the lineage of Z-cars in Nissan's past.

The 370Z's low ride height and body shape mean it's not the easiest of vehicles to access. The doors are long, bulky and need to be opened to a wide angle for easy entry. The seats are simple to slip into, despite the bolsters. At the rear, the hatch is well assisted and easy to open.

The standard sound system is a powerful piece of kit, with acoustics aided by the compact cabin. Even so, high quality upgrades are available including a 9.3GB hard drive and eight-speaker system with sat-nav and Bluetooth hands free. The standard system features an easily navigated layout, single CD slot and radio.

A healthy array of solid and metallic colours is available for the 370Z, while the GT model comes in a choice of three shades, one of which is unique to that model. Tasteful side stripes also add presence. Inside, there's leather splashed around the cabin even when specified with cloth seats and plastics are an improvement over the outgoing model.

Less confident drivers will find parking the 370Z something of an issue. The rear window offers limited visibility out of the rear and the view over the shoulders is extremely restricted by the wide pillars. However, choose the satellite navigation option and a reversing camera is included, helping to take the stress out of parking.

Porsche Cayman Still the choice of drivers and badge lovers