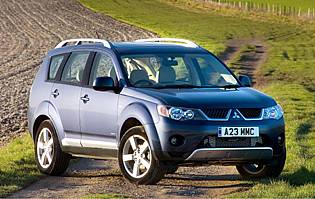 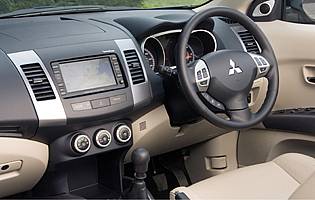 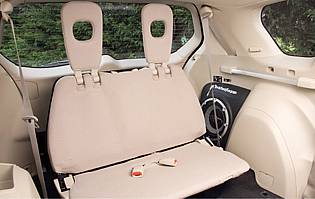 The styling of second-generation Mitsubishi Outlander has been inspired by Mitsubishi's bold 2002 Pajero Evo 2+2 concept. Its bulging wheel arches, v-shaped angular headlights and no nonsense stare means it looks ready for action, but it was first launched with only one diesel engine. The Japanese off-roader finally gets two new engines so its performance can now match its looks.

The Outlander is playing an ambassadorial role for Mitsubishi, charged with attracting new customers to the brand. Fortunately it now has the engines to help it achieve its goal, with the addition of 2.4 petrol and 2.2 Di-D units to the line-up. The petrol engine has been mated to Mitsubishi's redesigned six-speed continuously variable transmission (CVT) with paddle shifters that allows the driver to change the system to manual mode using the paddles even when the gear lever is in drive.

The petrol engine's performance suffers from a mid-range slump but having the option of manual mode allows the driver to access an immediate burst of pulling power. The implementation of the CVT eliminates any jerky gearshifts, the result being a seamless and smooth operation and a relatively frugal drive.

On the road, the Outlander delivers a strong performance with reasonable road holding and a well-insulated ride, sufficiently damped to retain body control on more demanding roads, and generally well poised through corners. The steering is light but not without feel and the engineers have done a fine job achieving high-speed refinement.

Developed more for on- than off-road use, with road performance and driving dynamics clearly a priority, the Outlander's off-road abilities are limited to light tracks plus towing and driving in poor conditions, however these are more than competently addressed by its All-Wheel Control technology. It features three, easy to activate, driving modes: 2WD; 4WD Auto and 4WD Lock and maintains traction by moving power around to where the grip is best. A rotary knob allows the driver to change modes while driving and its relatively high ground clearance means the Outlander will go most places its lifestyle SUV owners are likely to ask it. Towing capacity is limited to 1500kg.

Our verdict on the Mitsubishi Outlander 2.4 MIVEC Elegance

The Outlander is the first car to be produced from Mitsubishi's new global platform, which it shares with the latest generation Lancer Evolution. For the majority of people, its excellent standard equipment and ability to head off road on a whim, should satisfy customers in the market for an SUV akin to their lifestyle.

There are cheaper alternatives on the market, but they may not prove to be as good as an investment in terms of the reliability and durability that a Mitsubishi offers. The Outlander shouldn't cost much more to run than a conventional family estate and the equipment levels offer good value considering what you get for your money.

Utility features include an occasional-use third row of seats and a Range Rover-style split tailgate. Its versatility means owners can use it as a super-sized estate car with the confidence that it also acts as a load-lugger when required. However, the boot space is compromised when the third row of seats are in use.

The Outlander has a soft-finish dash, which is well laid out and features large controls in a clear display. The steering wheel mounted controls for the audio system are very useful. Elsewhere, the gearshift, brakes and steering all require nothing more than a light touch, making driving the Outlander incredibly easy.

The Outlander has wide, well cushioned seats for a comfortable ride. The five main seats are spacious in terms of head and legroom. Entry-level models do not feature the third row of collapsible seats, which is one of the Outlander's key selling points, but at least ensures more comfort and space for other occupants. Cabin refinement is a marked improvement over its predecessor.

Standard equipment includes an immobiliser and an alarm. The Outlander has a visible VIN, deadlocks, locking wheel nuts and a retractable luggage cover to deter criminals.

The Outlander is well equipped with safety features such as ABS, EBD, stability and traction control and plenty of airbags (front, side and curtain). It also has family-oriented devices such as anti-trapping electric sunroof and windows. All seven seats (where fitted) have three-point seatbelts and there are child-proof rear door locks.

Mitsubishi's Outlander rides and handles well, thanks to its firm suspension, which helps to eliminate the body roll usually found in 4x4s. The controls are driver-friendly, enhanced by the gearchange paddle shift levers and the opportunity to change driving modes while on the move. It is well behaved both on and off road, and provides an all-round agreeable driving experience.

Like its size, the Outlander has considerable family appeal as an alternative to an estate car that can also go off-road. The ability to seat up to seven means it can act as the family taxi when required. As a five-seater it can absorb luggage, boxes and everyday family clutter.

Any 4x4 SUV, with or without seven seats, is not ideal as a first car. Although it is relatively easy to drive around town, the Outlander is better suited to experienced drivers who will be able to better manage the 4x4 system and its bulk, whereas first time drivers will likely to struggle.

Inside the cabin the standard of the fit and finish is impressive, while the car's exterior is stylish thanks to its sleek lines and sporty look. Mitsubishi is well known for its reputation of reliable engineering and the Outlander represents a sound buy mechanically. And while the Outlander might not be seen as a status symbol, this has its advantages when it comes to security.

The Outlander boasts a relatively high ground clearance, which is useful for off-roading, but not so high that it is difficult to get into. There's plenty of legroom inside the cabin and the split tailgate with its low loading area is a clever touch. The third row of seats, once deployed, are cramped and most suitable for small children.

A 650-watt Rockford Fosgate branded audio system with nine speakers is available and takes care of the entertainment requirements, providing a clean and crisp sound. That aside, all cars have a radio and CD unit with MP3 compatibility. There is also a hard disk-based navigation system with music storage feature, colour touch screen, which all prove easy to use.

The Outlander is available in six modest exterior colours that complement its rugged looks. Inside the materials look good and feel durable. It is also possible to specify a light interior colour for the upholstery, which does a good job of brightening up the otherwise dark cabin.

A high-seated drivers position, large side mirrors, parking sensors and a rear-view camera means drivers will cope well manoeuvring in an urban environment. Given its size, the Outlander is surprisingly easy to park thanks to decent levels of feedback from the wheel and its estate car-like handling characteristics.