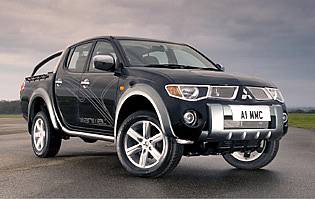 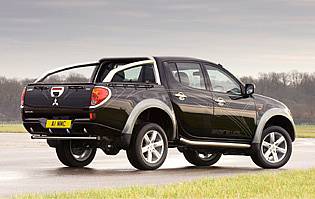 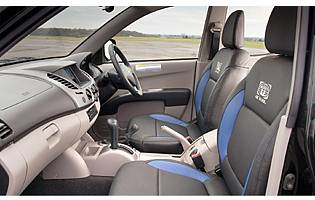 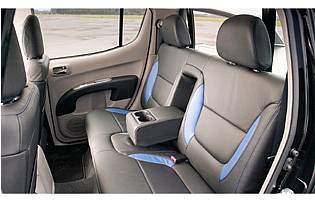 With its smart styling and rugged practicality the Mitsubishi L200 pick-up has quickly become as a common a sight on the UK's roads as many, more conventional vehicles. Already available with single, club or double cab variants, the L200 is now available with an extra long load bay, too, increasing practicality further.

Until the arrival of the L200 Long Bed, drivers of the popular Mitsubishi pick-up truck who required the additional seating space of the double or club cab were forced to sacrifice room in the rear load bay as a result. The new model comes with an additional seven inches of load bay at the rear, meaning L200 drivers can now have the best of both worlds if they're willing to drive a slightly larger vehicle.

The L200 Long Bed uses the same chassis and platform as the regular single, club and double cab variants. Previously, the double cab option impinged on the space available, leaving a slightly stubby load bay at the rear. The new model features a greater overhang at the rear and higher sides to the load bay, increasing volume if left in open back form. Plastic lined and with a sturdy rear tailgate, the rear end is capable of hauling greater loads while the double cab can still seat five adults in comfort.

Despite the extra length, the exterior styling remains unchanged. That means a visually pleasing design with the curvaceous appeal of the front end emulated in the rear doors and attractive light units and chrome details. Underneath the glamorous exterior a more powerful 175bhp 2.5-litre diesel unit is intended to cope more efficiently with the additional load potential and a four-wheel drive system provides traction in less favourable conditions.

Limited factory output means that only double cab models in 4Work, 4Life, Warrior and Animal trim levels can be specified with the additional seven inches of load bay. Among those available is the top of the line Animal model. With leather seats, a comprehensive audio and visual set-up including sat-nav and Bluetooth phone preparation plus additional luxuries such as five electric windows (including the drop-down rear), the model attempts to blur the lines between work-a-day pick-up and family-friendly SUV even further.

Our verdict on the Mitsubishi L200 Animal Long Bed

Versatile, practical and comfortable, the Mitsubishi L200 Animal Long Bed model offers more than the average pick-up. The additional load space adds to the pleasing styling and a five-seater cabin without detracting too much in the way of manoeuvrability. It's not as refined or user friendly as an SUV but it is better suited to the rigours of working life and more than capable of serving as a large family vehicle. It's good value for money, too.

With its extra long load bay, five-seater double cab and generous specification, the L200 Long Bed Animal offers a lot of vehicle for the money. The diesel engine is respectably frugal and, as a commercial vehicle, taxation is less punitive. The L200's consistent popularity means residuals should hold up well, too.

The L200's cabin is spacious and practical with cubby holes and storage aplenty. The real practicality can be found in the extra large load bay, however, where an additional seven inches in length and higher side walls offer greater load carrying potential. Although access is restricted as a result, the large bay makes the L200 Long Bed an extremely capable and useful vehicle. A plastic liner means it can easily be washed out, too. The strong diesel engine effortlessly copes with hauling large loads and towing will also prove a walk in the park for the chunky vehicle.

The main dials are all easy to understand and clear while switchgear is sturdy and well positioned. Although the steering is a little vague and the gear lever throw a long one, the L200 is easy to control when driven sensibly. The four-wheel drive and locking differential are controlled using a floor mounted lever which requires a firm hand. The system can also be sluggish to disengage, reverting back to two-wheel drive with a clang from the transmission.

The car-like seats in the L200 allow plenty of adjustment and prove very comfortable. The driving position is good and those in the rear seats benefit from a surprisingly generous amount of legroom. The ride is soft and absorbent, but the basic suspension set-up at the rear can make it a little bouncy. Tuned for more power and torque, the 175bhp 2.5-litre diesel engine can be rough especially when working hard, but is suitably refined on the motorway. Air-con and full electric windows are standard equipment, making the five-seater cabin a comfortable one to travel in.

Owners will need a cover over the load bay if they don't want to be constantly removing belongings from the L200. A number of styles are available from Mitsubishi. Internal storage is good, while remote central locking, an immobiliser and alarm are present on the Animal variant.

Anti-lock brakes and electronic brake-force distribution are both fitted and there's four-wheel drive to keep you safe in slippery situations. Twin front airbags are standard across the L200 range, while a pair of Isofix mounting points is present in the rear of double cab variants. All five seats get a three-point belt.

Despite its civilised looks the L200 remains a commercial vehicle particularly in Long Bed form. As such it's not the most rewarding vehicle to drive. Compared to a passenger car SUV the steering is vague and the ride soft and a little bouncy at times. Regardless, the L200 Long Bed performs well for a vehicle in its class. Easy to drive both on the motorway and in town despite its size, the L200 is never tiresome, particularly with the well-specced Animal interior. The long gear throw is precise and the pedals well spaced for driving in chunky boots. With 175bhp diesel unit there's no shortage of power available and manually selectable four-wheel drive makes short work of slippery conditions.

The double cab format means the L200 could happily serve dual roles as a work and family vehicle. To offer security in the rear families will want to opt for a hard top addition - one of these removable lockable units quickly turns the pick-up into a large SUV or van arrangement. Designed to take abuse from five work boot wearing adults, it will easily cope with all that a family of three can throw at it. Although not the most refined family vehicle, it's a good trade-off off between a work truck and family car.

Large and with the potential to be cumbersome in the wrong hands, the L200 Long Bed is not the kind of vehicle that will flatter a novice driver.

With up-market, SUV-like exterior styling the L200 has the most kerb appeal of the models available in the pick-up market. This hasn't been damaged by the addition of the extra long bed. In fact, the model boasts more pleasing proportions as a result. A strong image is backed by decent build quality that sees doors slam shut with a satisfying thud. However, pick-up buyers intending to use the model for more rigorous tasks may question the durability of soft leather seats and additional electrics in an interior that may often be left wet and dirty.

Like most high-rise off-roaders, the L200 requires you to climb up and into its cabin. If you're not that agile this could become something of a chore. The same is true of the rear seat in the double cab configuration, only more so as the rear doors don't open as wide. At the back, lowering the L200's tailgate requires a little strength. Clambering in and retrieving stuff will also be something for the fit and able, particularly as the Long Bed models boast higher side walls.

In range-topping Animal spec, the L200 boasts a level of entertainment equipment beyond the call of duty. A built-in screen offers a portal to the CD-changer, DVD-playing function, remote control operated sat-nav and radio. Bluetooth is also standard equipmen - very useful in a work vehicle. Sound quality is average despite the high level of equipment but the visual and audio systems are simple to use and easy to navigate.

In Animal trim level the L200 boasts an impressive array of equipment and finishing kit. Chrome trim on the exterior gives the model a more upmarket appeal, 'in-your-face' decals are also present if desired. Five leather seats are standard inside and the steering wheel and transmission controls also benefit from a leather finish. This is in contrast to much of the interior plastic which, although solid and durable, has a less up-market 'wipe-clean' feel to it.

With an additional seven inches in length, the hardest part of parking the L200 Long Bed is finding a large enough space. Thanks to huge mirrors, a tinted rear screen that can be lowered like the side windows, light power steering and reversing sensors, manoeuvring the large vehicle is less stressful than it at first appears. An excellent turning circle is also very helpful.