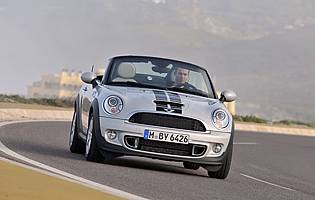 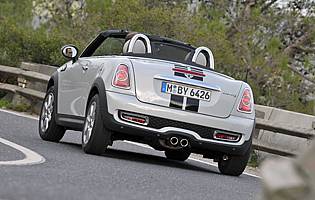 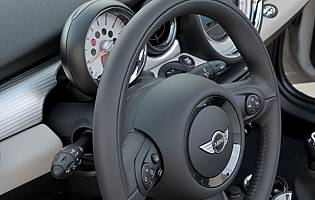 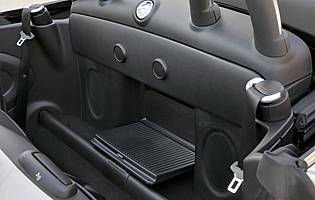 Never one to miss a trick or exploit a niche, Mini has created yet another spin-off from the hugely successful hatchback model. The Mini Roadster is actually more closely related to the recently-launched Coupe, and offers drop-top two-seater thrills with a sportier intent.

The success story of the modern Mini is well engrained in the public consciousness, beginning with the humble three-door hatch before extending into the Clubman, Convertible, Countryman and Coupe versions as well as numerous engine and trim levels across the different bodystyles. It is this combination of huge choice and personalisation combined with the sheer charm and driving appeal that has seen it become such a popular choice.

Its perhaps then no surprise that Mini should bring out yet another variant, and one that is remarkably similar to existing offerings. The Mini Roadster is a logical step from the recently-launched Mini Coupe, and follows the basic silhouette, dimensions and layout of that car. With just two seats and a simple storage area behind them the Roadster clearly sacrifices some practicality in the name of fun.

This is something of a specific market given that the Mini is already available in Convertible form, but that car has four seats and comes with a much wider engine choice. The Roadster follows the path set by the Coupe in that it is a more focused driving machine aimed at customers who want to enjoy the best that the Mini can offer in terms of handling and performance - just with the benefit of fresh air at the same time.

In-keeping with this approach the Roadster has a relatively simple fabric roof that has manual operation as standard with the option of part-electric assistance. In either case the roof is released from the windscreen rail with a simple turn of the handle and locks into place behind the front seats. Like all the best roadsters this can be done without getting out of the seat, and a determined arm could fold or raise the roof even at speed.

Our verdict on the Mini Roadster Cooper S

With each new niche explored the newer Mini variants are aiming for an ever-smaller group of potential buyers, but it's not hard to see the appeal of the Roadster. It has a simple, stripped-down charm that helps to maximise the driving enjoyment, and the more focussed suspension set up delivers greater thrills. Ultimately the lack of a fixed roof is a compromise but for fresh air pleasure it is clearly the pick of the range.

The level of standard equipment might be gradually increasing on Minis but there's still plenty of potential to load you car up with attractive options. Just be aware that few will directly influence its future market value. Purchase costs aside, the Roadster - like most Minis - should prove affordable to run. With the promise of low CO2 and fuel consumption figures you'll be spending less time at the pumps and paying less tax, too.

Although a strict two-seater the Roadster makes a decent fist of fitting into your regular life. Cabin oddment storage options are modest but where the car excels is with its load capacity. Surprisingly it has more boot space than the standard hatchback, while the through-load slot will accommodate skis, snowboards or golf clubs.

To fans of BMW's range of Mini products the Roadster's interior will be familiar. The car's large speedometer and multimedia display dominate the fascia, and the toggle switch minor controls are logically laid out and easy to operate. The car's chunky steering wheel can be a home for the supplementary audio controls, while many rivals could learn from stubby manual gearlever's delightfully short and accurate shift action

Again there are compromises whenever a car is turned into a convertible, and although the Roadster runs on stiffer suspension than the hatchback it still does a good job of shrugging off road imperfections. Stumble into a larger hole in the road and the Roadster can't prevent a thump from the tyre, but this occasional compromise is worth it for the engaging drive in the right conditions.

Covered cabin storage options are limited but there's plenty of room in the Roadster's boot if you want to keep things out of sight. The usual alarm and immobiliser package is present for complete peace of mind.

As you would expect there's no shortage of airbags and electronic stability controls here. The latter can be switched off if you're suitably competent, although there's a surprisingly high margin of slip before it all kicks in if you leave it one, which should please the keen drivers.

There is a clear focus on driving dynamics with the Roadster, and just like its Coupe sibling the stiffer suspension gives sharper responses. To a degree this is offset by the slight loss of rigidity in the body in the conversion to a drop-top roof, but for 99% of the time it delivers just the kind of quick-fire responses and keen temperament that will make it such a desirable car. In Cooper S form it feels quick but not rapid, but the flexible turbocharged engine always has torque in hand.

As a second car the Mini Roadster might just work but on it's own it's something of a non starter for all the obvious reasons. That said, its decent load carrying ability does put it ahead of some other coupe rivals.

There's little doubt that, assuming you can afford one, a Roadster would a pretty reasonable first car. You might initially struggle with the poor rear vision when parking, but everything else about the car makes it easy to drive and own.

Still going strong despite initial cynicism from the critics, the Mini brand remains one of the few modern day automotive success stories. The clever marketing strategies, the ability to personalize your car and the relatively low cost of ownership all make for a compelling package. The quality of the Roadster is at a consistently high level, although some elements of the car are feeling their age against newer competition.

With only the front seats to get into, the wide opening front doors allow very easy access for the driver and passenger. Even with the roof in place there is sufficient headroom, and the sky is the limit with the roof folded down. Access to the boot is straightforward too, and although the luggage area is relatively shallow there is the option to access it through a door in the cabin too.

The basic audio offering is a good one, and includes a DAB radio tuner for good measure. The car's physical controls are reasonably straightforward, although they're not all in one place. Upgrading to a more powerful unit plus MP3 player connectivity enhances the experience. An easy to use Internet radio function can also be specified, although you will have to keep an eye on your mobile phone bill.

There's a lot to like about the Roadster, with much of its appeal centred on the way it looks. In typical Mini style, it's very easy to customise your car with all manner of bonnet stripes, different alloy wheel designs and a range of contrasting paint schemes. All in all, there's plenty of scope for everyone here.

The Roadster is a small car no question, and as with most modern cars at low speeds the power steering offers a great deal of assistance. The view forward is fine but with the roof up it is much more restricted. However with the roof down you have an almost 360 degree field of vision, which should make the Roadster one of the easiest cars to park. Parking sensors are also standard across the range, which leaves no excuses for poor parking.

Porsche Boxster More money yet again but is the purists' choice