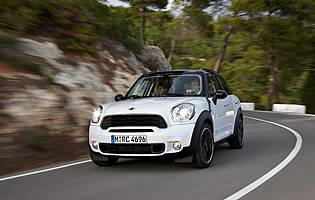 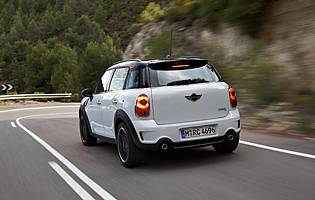 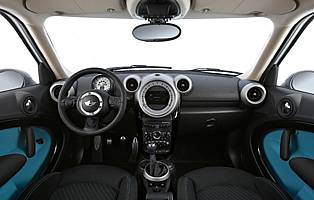 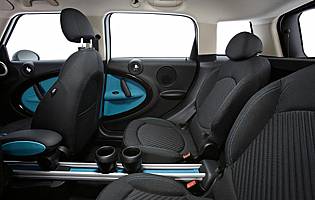 When talk turns to small cars it is impossible to ignore the success of the Mini, which has captured the imagination of thousands of buyers who are tempted by the engaging drive, cheeky looks and high degree of personalisation. If there is one criticism it is space, but Mini is tackling that with the introduction of the Countryman.

Existing versions of the Mini have all been variations on the hatchback theme, even the unusual Clubman being closer to a hatchback than an estate. However, the Countryman is further away from that template, sitting somewhere between an SUV and an MPV. In terms of size it is the largest Mini yet, and it is just a few centimetres shorter than a BMW 1-Series. Its exterior appearance is a clear blend of the family Mini styling cues combined with a high-riding, tough streak, designed to align it with smaller SUVs.

The exterior stretch has clear benefits when it comes to the cabin. The Countryman is a genuine five-seater, although buyers are given a choice of a rear bench seat or a pair of individual seats with a storage system between the two. The boot space is larger than on both the hatchback and Clubman models, turning into a viable family car, as well as giving the potential for increasing the space through folding seats.

Underneath the skin the Countryman has something new to offer. Although the engine range is the same as other Mini variants, the Cooper S model is available in ALL4 guise, which denotes four-wheel drive. Fitting in with the car's SUV looks, the ALL4 system automatically distributes torque between all four wheels to maximise grip.

The cabin itself will be instantly familiar to Mini drivers, with the large central speedometer dominating the upright dashboard. The Countryman has a mix of new and carried over elements to the cabin, but as with each passing Mini variant, the quality has improved yet again. The Countryman is also the first Mini to offer Mini Connected, a smart phone system that allows you to perform internet searches, operate navigation, phone and audio through an interface.

Our verdict on the MINI Countryman Cooper S ALL4

The Countryman is an inevitable chapter in the Mini story, and although the idea of a four-wheel drive crossover may be some distance from the ethos of the original Mini, the reality is that it will open up the brand to a wider range of buyers. The extra cabin space and increased practicality do little to dilute the enthusiasm and vim that makes the Mini so enjoyable to drive.

Even the turbocharged Cooper S offers respectable economy and emissions performance, but for the frugal a diesel-powered version will do even better. Although the initial purchase price is a little higher than its rivals, residual values are also likely to do the same.

Although not the best in class, this is finally a Mini that can cope with decent amounts of luggage and full-sized adults in the rear. Storage space is not exceptional, but the rear storage system is useful and the seating options allows the amount of luggage space to be fully optimised.

The layout of the Countryman is largely familiar, with the giant central speedometer at the heart of it. However, including an information screen and sat-nav in the centre has relegated the actual speed information to the outside of the dial, making the auxiliary readout essential.

Even in the sportiest Cooper S version, ride comfort is good enough for most buyers. The ride quality issues with run-flat tyres have been eradicated, and although the most severe bumps are felt in the cabin, all occupants can enjoy a relaxed drive.

All Countryman models come with an alarm and immobiliser as standard, while an electronic key and remote central locking ensure a high level of security.

Adding four-wheel drive to the mix elevates the Countryman's safety kit to a new level, as it already benefits from standard ESP and a strong safety cell. With high levels of performance and grip, the Countryman is a car with a high level of active safety.

The pleasure of driving is key to the Mini's appeal in all its guises, and the Countryman manages to retain most of this appeal. The steering is still sharp, if not quite as direct as the hatchback, and all the major controls respond keenly to inputs. It is far from hyperactive though, and is happy to trickle through traffic.

This is a Mini that really can perform as a family car, with enough space to cope with at least an average brood. It also has the kind of visual appeal and kudos to be a hit with children.

The Countryman in Cooper S form is a relatively expensive car but the cheaper versions would make an excellent first car, thanks to the good running costs, sound visibility and easy controls.

The Mini's image is almost untouchable, recalling the original 1960s Mini but offering modern convenience and reliability. The high degree of personalization also allows buyers to create a car that feels individual, which is a major attraction. Quality has always been strong and is improved even further in the Countryman.

Thanks to four well-sized doors and the increased ride height, getting on board the Countryman is easy, especially for those cars with two rear seats. The same can be said for the boot, with a good sized tailgate and low loading lip.

All models are fitted with a radio/CD as standard, operated by simple controls. Sound quality is respectable, with the speedometer displaying audio information. Upgraded systems are available increasing output and quality.

As well as a greater choice of cabin colours, decent materials bring a quality feel. The vast majority of the plastics and fabrics feel sturdy and hardwearing, while the mix of chrome and black plastic works well. Additionally, an interior light package gives subtle illumination throughout the cabin as well as the option to change the colour at the flick of a switch.

The taller stance of the Countryman makes it easier to park despite the larger dimensions, and the addition of parking sensors removes all the stress of getting into a space.

Kia Soul No four-wheel drive, but characterful inside and out