Clubman retains familiar Mini styling from the front, but overall it's longer than the hatch 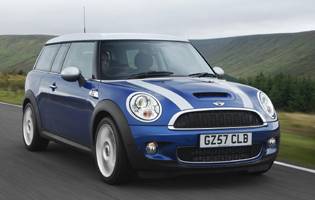 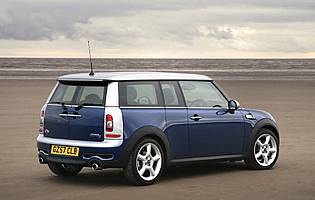 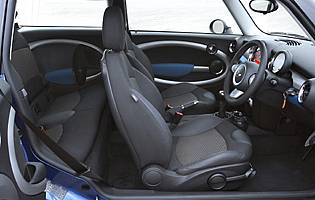 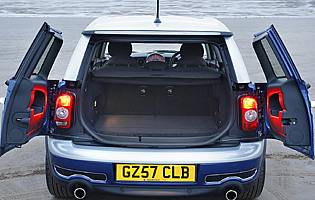 Any manufacturer with a one-car range will tell you that any successes won't last forever. That is, unless your name happens to be BMW. With its resurrected Mini range, the German firm hit the jackpot. And just for good measure, there's a 'mini' estate called the Clubman to keep the hatch and convertible company.

Not everyone will likely remember the first generation Mini Clubman, and for those who don't it was essentially a regular Mini but fashioned in the style of a more practical estate. Second time around and the concept remains the same: a slightly longer version of the hatch sporting van-type split rear doors.

Only this time there's an added feature in the shape of a third door located on the driver's side. This rear door opens out rearwards, but only once the front door has been opened for obvious safety reasons. There are parallels here with Mazda's RX8 and its rear doors, although the Mini only has the one - there is no door on its nearside.

The official line is that engineering issues prevented a door being fitted on both sides. To add fuel to the critics' fire, with the UK being the car's spiritual home, the left-hand drive-centric feature will benefit European and North American drivers the most. That aside, the Clubman does boast a bigger and more practical boot, and one that can finally be described as useable.

In reality, the Clubman is much like the older three-door hatch model. The cabin layout is the same and from the front the car looks the same. You can specify either two or three rear seats at no extra cost however, and the Clubman's ride is noticeable smoother thanks to its extra length and modified suspension settings.

Our verdict on the Mini Clubman Cooper D

Unlike the hatch, the Clubman is likely to be a car you either 'get' or you don't. For those that do, the extra room, smoother ride and more practical boot will no doubt be the deal breakers. The Clubman is still a Mini at heart though, which will mean plenty of attention when you're out on the road.

The basic prices for the Clubman variants might look appealing, but you'll need to add a few options to make them more habitable. As such, the cost of ownership will go up, but this is tempered by the optional inclusive service package. Pay upfront and you can have a few years of cost-free regular servicing. Opt for the Cooper or Cooper D and your fuel bill will also be modest.

A little longer than the Mini hatch, the Clubman puts its extra length to good use. The rear seats are now useable - to a point - while the car's boot is a sensible size. The rear doors open out van-style to reveal a flat load bay and the option of folding the rear seats forward. Up front, the car's glovebox swallows a surprising amount of stuff, but the door pockets are on the small side. The centrally located cup holders are useful though, as is the cubby in front of the gearlever.

Like the hatch, the Clubman comes with all the usual Mini-centric controls. It's familiar fare, right down to the oversize central speedometer. It all works though, and the rev counter plus digital speedo/trip computer mounted on the steering column is a useful addition. The slightly contrived toggle switches further down the fascia remain an acquired taste, but at least the column stalks and audio controls are straightforward.

Although a snug cabin by family hatch standards, the Clubman's interior is well made and insulates you from the outside world better than some more expensive cars. The seats are supportive and two adults can travel in the front without bashing elbows. Road imperfections are expertly dealt with by the car's suspension, although anyone larger than a small child will find the rear accommodation limited.

There's nothing special available for the Clubman, other than the usual alarm and immobiliser combination. Locking and unlocking is via the keyfob, which can also unlock the rear doors separately. For extra peace of mind, a visible deterrent such as a steering lock would be a sensible low-cost investment.

It's plain to see that a lot of BMW technology has trickled down to the Mini, which is no bad thing. All the usual safety kit is present, with advanced stability control also available. Airbags abound in the car's cabin, putting the Clubman on a par with more expensive machinery.

From the outset the Mini was developed with fun in mind, and as such it's enjoyable to drive - whatever the model. The Clubman's slightly longer wheelbase and more compliant ride ensures a better dynamic performance over poor roads. And, as with the hatch, the most powerful Clubman variant is the most exciting. The Cooper S is very close to hot hatch territory, but with none of the usual performance car compromises: harsh ride, poor fuel consumption, poor refinement. As for the diesel Cooper D, it offers 60-plus mpg and a decent turn of speed.

Despite the presence of a longer wheelbase and an almost 'proper' boot, the Clubman still falls short as a family car. Carrying a pushchair plus shopping in the boot might be a struggle, and there's the issue of getting comfortable in the back if you're anything but a small child. The third door is useful as it would make attending to a child in a restraint easy, but there's no avoiding the fact it's on the wrong side of the car for the UK market.

There's little negative that can be said about the Clubman as a first car. It's easy to drive and park, the various controls are intuitive and visibility is good. The hot Cooper S variant might prove a little expensive to run, but the Cooper and Cooper D models should prove cheaper to fund.

With its hi-tech factory and attention to detail, BMW has ensured that Mini production is to the highest standard. While falling a little short in relation to efforts from Honda and Toyota, there really isn't anything to complain about. Image-wise the Mini range has been a huge success on a global scale. The Clubman only adds to the brand's long-term future prospects.

As with the hatch, access to the front cabin of the Clubman is straightforward. You do sit a little lower than in a conventional supermini, but this adds to the car's sporty appeal. Despite the extra inches in the wheelbase, the Clubman's rear seats are realistically only for children - or adults on very short journeys. The car's third door, located on the right-hand side, sort of helps, but means you will be exiting the car into traffic.

The standard equipment works well, but it's no surprise to see various cost options claiming to add to the experience. A CD changer and satellite navigation options enhance the ownership experience, along with steering wheel mounted audio controls.

As with all Minis, the Clubman exudes the same amount of style. There are various supplementary packs that add various trim improvements, plus the usual choice of upholstery materials. Predictably, bright colours - inside and out- work best.

Yes the Clubman is longer than the hatch, but this doesn't really pose any major problems. The optional parking sensors help matters, as does the car's light steering. The view rearwards is spoiled a little by the split window, though.