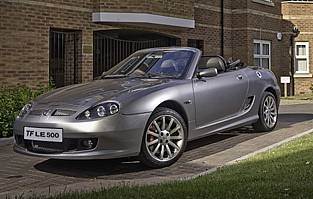 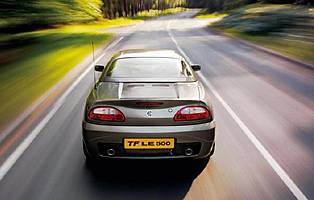 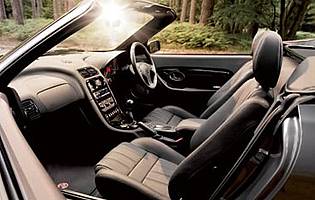 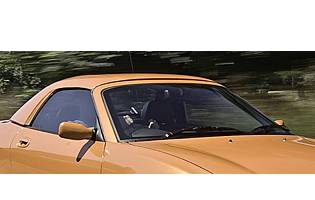 Following the collapse of the MG-Rover group and the subsequent selling off of what remained to a Chinese manufacturer MG is back in business and has returned to a familiar friend to kick-start the company's new lease of life. The last genuinely new product to come out of MG, the TF has been refreshed and a limited edition model unveiled.

The MG F and MG TF remain a common sight on UK roads, and sales of the models were respectable before MG-Rover collapsed. MG's new Chinese owners hope that the two-seater sports car's popularity will remain as it unveils the latest version, fronted by a limited edition run of LE500 versions offering extra trim and limited edition status.

The basic exterior design remains unchanged, but the new owners have restyled the front end to offer a sleeker, less bulbous appearance. Projector style lights and 16-inch alloy wheels bolster the appearance along with red brake callipers. Inside, with the exception of leather and shiny plastics for the LE500 model, much remains the same.

The same can be said of the MG TF's underpinnings. The mid-engined layout, key to the balanced and highly responsive nature of the car, means the compact cabin is limited to two seats with a boot in the rear. The engine itself, a 135bhp version of the old K-Series unit now known as the N-Series, features a reworked block and head designed to improve efficiency, emissions and reliability. Positioned directly behind the two seats, it drives the rear wheels through a five-speed manual gearbox.

Along with the engine, equipment levels have also taken a step into the new age. Parking sensors, electric mirrors and electric windows are standard on the LE500, along with a body-coloured hard-top that improves security and seeks to aid refinement and winter driving. The canvas folding roof remains one of the key attributes, allowing for roof-down summer driving.

Our verdict on the MG TF LE500

Limited edition status increases the pulling power slightly, but the MG TF LE500 still has a hard time squaring up to more modern rivals. Electric roofs, sporty yet supple ride qualities and quality and materials have all advanced while MG has been away, leaving it to play catch-up. The model remains a delight to drive in its element, but struggles in some areas outside of it.

Combining performance with reasonable fuel economy, the MG TF LE500 offers a decent trade-off. The asking price reflects models in this category, but the dated interior and underpinnings and less impressive build quality of the MG offering means you need to be very keen. Insurance costs won't be steep for experienced drivers and parts availability should be excellent.

The MG TF is never going to rate highly as far as space and practicality is concerned. As a two-seater it is limited in cabin space, although tall drivers will still find there is room inside for them. The boot may still be only a fraction as large as a saloon or hatch, but it's big enough to swallow a couple of overnight bags and there's a little emergency room in the front, too. There are enough bins in the cabin to deal with wallets and trinkets.

Speed sensitive steering is a bonus around town, but the rest of the TF LE500's controls and displays are a little dated. The brakes can feel wooden and the gear change is imprecise. A small instrument binnacle features an optimistic speedometer and a rev counter that's easier to read, along with some warning lights. Switchgear quality is not very impressive: basic but functional best describes it.

Standard air-con and electric windows take care of the creature comforts and the leather interior is quite cosseting. The ride, however, is not, and can be frustratingly crashy around town. Interior refinement is also lacking. Wind noise is reasonably suppressed, but the engine noise intrudes into the cabin to a high degree. A standard wind deflector helps quieten thing down when roofless.

Remote central locking and a Thatcham category one perimeter and volumetric alarm and immobiliser are a step into the present for the TF. The added security will be useful if not using the hard top roof, as the canvas roof is hardly intruder proof. A lockable glovebox is a bonus and the boot can only be accessed using the key.

Safety is basic with a driver and passenger airbag plus door impact beams as standard. Mid-engine cars come with the advantage of having no engine to push into the cabin in the event of a frontal impact, though.

The MG TF remains a perfectly poised, highly enjoyable car to drive quickly. The 1.8-litre engine is a little raucous but offers just the right amount of power for a car of this size, and its mid-chassis positioning enables the TF to handle beautifully. There's a natural feel to the steering and the stiff suspension, although crashy around town, comes into its own on a smooth B-road. Slightly wooden brakes and a less than precise gear change fail to take the edge off what is still a highly entertaining car to drive.

Two seats severely limit the MG TF LE500's family car credentials. Instead, it's really a car for singletons and couples.

For young drivers, the MG TF offers one of the few ways into a genuine two-seater sports car without being hugely penalised on insurance. It will still prove more difficult to get by insurers than a regular hatchback but will be worth the effort in terms of driving pleasure. Although sporty, the balanced handling means it's a safe bet for inexperienced drivers, too.

The MG TF retains a broad appeal, with drivers young, old and from both sexes happy to get behind the wheel. As a car for the summer months it has a particularly strong image. However, build quality and materials let the new versions down when compared to their rivals. The car has failed to move with the times inside leading to a dated feel, while the doors shut with a clang and some interior plastics look and feel less pleasant than more modern counterparts. The saving grace is the exterior, which still looks sharp, particularly on the 16-inch LE500 alloy wheels.

A low roof and seating position might pose a problem for less agile drivers. The roof can always be removed, however, and the model is no less difficult to access than the majority of compact sports cars.

The LE500 model comes with an aftermarket Pioneer CD tuner fitted as standard along with an MP3 connection and four speakers plus tweeters. The unit looks good with its flashing visuals and sound reproduction is acceptable, but the unit struggles against interior noise on the move rendering it largely useless at speed. The tuner can struggle to find a reasonable signal, and interference from the cars electric systems is annoying.

As a limited edition model, the LE500 naturally includes some additional trim as standard. Most notable is the body coloured hard-top that can be attached over the canvas folding roof, while the piano black finish to the interior plastics, leather seats and gear knob, chromed exhaust and some subtle LE500 badges also mark it out as a little different. Colour choices are limited to six, but are vibrant, appealing and look good on the compact body.

Standard parking sensors make slotting the small MG into a standard space a breeze. Even without them, it's not a difficult car to park, particularly with the roof down where visibility is 360. With the roof in place, even the small rear window can't hamper the ease of placing the models stubby rear.