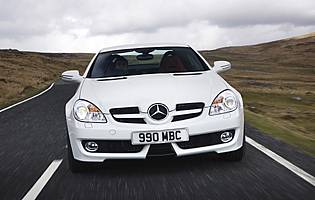 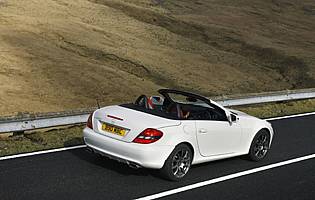 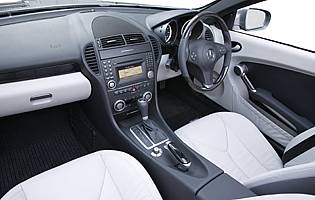 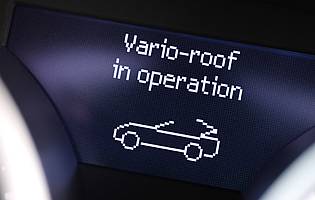 The SLK has a brand new look and although the exterior changes may be subtle, it's the mechanical ones that are significant. There's greater economy across all three engines in the standard line-up, a new variable assistance steering system and improved performance and CO2 figures across the board. The highlight is the substantially revised, high revving V6 engine in the SLK 350.

Stronger styling to the front and rear points the way forward for Mercedes' baby roadster. A new bumper and air dam gives it a bold V-shape at the front, the tail gets diffuser-look styling, topped off by trapezoidal shaped exhaust pipes, plus there are AMG-inspired darkened tail lights.

The free revving V6 engine in the SLK 350 has been revised to offer substantial increases in power and torque, although its capacity remains unchanged. The rev limit has been raised to 7,200rpm, the compression ratio increased and there's a new intake manifold and valve gear which contribute to the hike in the SLK's performance. It's never been a slow car to drive, but the changes have transformed it into a lively and capable roadster, one with serious pace and impressive driving dynamics.

It sounds fast too. Some careful tweaking has produced a particularly rich engine note, that when combined with the 7G-Tronic gearbox's automatic engine blip during downshifts, won't fail to leave the driver impressed. The optional sports suspension drops the SLK's ride height by 20mm, and stiffens the chassis to give it perfect poise and composure whether cruising on the motorway or when tackling twisty roads with gusto. The ride is firm, and comfort has been compromised a little, but it's not unbearable and is worth selecting to get the most out of what's on offer.

Buyers can also opt for a 'direct steer' system which uses a variable ratio steering rack delivering adjustable assistance according to speed and the amount of lock applied to the wheel. More lock results in speeding up the steering for a quicker response, while keeping the steering wheel level allows for more straight-line stability for motorway cruising. Similarly the system makes light work of slow speed manoeuvring, such as parking, reducing steering wheel turns lock to lock by 25 per cent. Overall, steering is quick to respond but can still suffer from a slight lack of feel.

Our verdict on the Mercedes-Benz SLK-Class 350

The SLK is fun and undemanding to drive. It offers an enticing package for the everyday sports car enthusiast who's looking for an accomplished all rounder, as capable on the daily commute to work as it is on a weekend country getaway. The changes to the SLK range have made it more appealing than ever and the 350 is the best of the bunch, offering fantastic pace and performance.

The boost in power and torque hasn't come at the expense of increased fuel consumption and emissions. The SLK 350 delivers more power yet consumes less fuel than its predecessor. The optional seven-speed auto transmission further reduces CO2 emissions significantly. There are few manufacturers who can rival the SLK's mix of running costs and performance in this sector.

The cabin is snug and cosy yet manages to provide enough space via various cubby holes to store various items. The boot is compromised by the hardtop folding roof, but will provide enough capacity to take weekend squashy bags or the weekly shop. The SLK is not hugely practical and owners will have to plan packing and transportation requirements in advance to get the best out of the space available.

Although busy, the cabin has always had a smart design with controls laid out logically and neatly. The instrument clusters have chrome-edged dials and red needles, making them easy to read quickly. The steering wheel has multifunction buttons allowing the driver to control the stereo, while the sat nav display screen is bright and clear.

The three-piece vario roof is controlled by a push of a button and transforms the car from hardtop to roadster relatively quickly. Whether the roof is up or down there is little intrusion from wind or road noise. Standard equipment levels for comfort are high but the Airscarf system, is an option. It works by blowing warm from the base of the headrest onto your neck.

An alarm system with immobiliser and interior protection is fitted as standard, and there is remote central locking with an interior switch also. Locking wheel bolts protect the wheels from theft, while inside the cabin the cubby holes should help owners to keep personal possessions out of sight. The hard-top, as opposed to a fabric roof, adds an element of security when the car is left unattended.

There's plenty of safety kit on board with all of the usual driver electronic aids (ABS, ESP, brake assist), while the numerous airbags fitted also include head-thorax side airbags. Roll-over and side impact protection is also covered as is a brake pad wear indicator. A tyre pressure warning system is available as an option.

The ride is composed and supple enough to deal with poor road surfaces yet remains firm, enhancing the SLK's sporty feel. The gearbox carries a precise and slick action, there's plenty of grip available and minimal lean when cornering. Optional sports suspension boosts the car's sporting appeal but at the expense of some ride comfort. The 350's engine is entertaining and its soundtrack particularly appealing.

As a two seat convertible, the average family would find it difficult to live with the SLK as its main car. However as a second car, the convertible scores highly providing easy, entertaining and stylish transport for short breaks away when the children are old enough to look after themselves or when the baby-sitter is round.

Irrespective of the power and performance on offer, the SLK does not suit first car buyers. Its low driving position and reduced visibility would make for a challenging experience for new drivers. On top of this, the insurance and running costs would be extremely high for someone who had just passed their test.

The SLK is seen more as a fun convertible than a performance sports car. It's not really got the guts or handling dynamics to compete with its more hardcore rivals but the revisions and new engine produce an entertaining yet undemanding drive. Its aggressive styling should shake off its old hairdresser's car image, while Mercedes-Benz continues to deliver a high standard of quality.

Access into the SLK is easy with the roof down. When the roof is up, the low roofline and the car's low seating position requires passengers to duck down and bend as they enter. However, the doors open wide and the seats are electrically adjustable with memory (including door mirror and steering column memory). A remote release provides easy access to the boot, although space is reduced significantly when the roof is folded down.

The stereo and navigation system is much improved in terms of user friendliness, although some of the buttons are a little small. The SLK also comes with a Bluetooth hands free phone connection and an aux-in port for connecting external music players as standard. iPod owners can opt for a dedicated interface for steering wheel control and on-screen track listing.

Standard colours are limited. To show off the SLK's looks it's worth paying for metallic paint which comes in a wide variety of colours. Grey fabric upholstery is standard, but the optional leather, available in a range of colours, will allow you to co-ordinate the exterior with the interior. Wood trim is available as an option but looks dated compared to the smart silver-painted trim.

The car's exterior mirrors have been enlarged in a bid to improve visibility. However, the driving position is very low and when the roof is up, rear visibility is limited thanks to the small rear window. As such parking can be tricky. The optional direct steer system and parking sensors are extremely helpful but come at a cost.

Porsche Boxster The best roadster for performance and handling but pricey