Subtle makeover extends to new bumpers and a resculpted bonnet 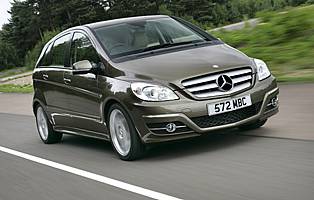 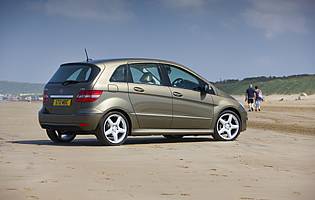 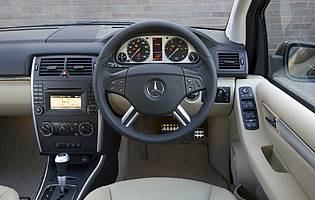 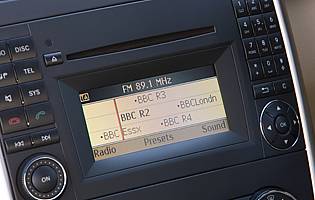 Three years on from its debut, the Mercedes-Benz B-Class has undergone a comprehensive makeover, with changes inside and out designed to keep it up with its rivals. The premium MPV occupies a popular market segment, but is one of few cars of this nature that can claim to offer luxury and prestige.

The B-Class is now an established part of the Mercedes-Benz range, even though it occupies a segment not normally seen as a popular one for the German manufacturer. The B-Class is a five-seater compact MPV, bigger than the A-Class but roughly equal in length to the conventional C-Class saloon. However, thanks to its clever design and tall body, it offers cabin space unmatched by a conventional saloon without the penalty in terms of exterior dimensions.

The exterior itself has undergone a number of modest changes to refresh the look and bring it in line with other products in the range. A new bumper design, revised grille and bonnet bring a sharper look to the B-Class, while the rear gets a revised bumper. All the exterior changes are very subtle and at first glance it is hard to tell the new car apart from the old. It is still a distinctive shape however, and the combination of a high roof and tall doors result in a car that looks and feels compact from the outside.

Step inside and the B-Class shows its unusual design immediately. The clever sandwich floor technology, which puts the engine beneath the passengers, means it has a higher floor than a conventional car, so you slide into the seat rather than stepping up or down into it. The tall doors give a large opening and the same goes for the generous boot that is easy to access.

There are more changes on the inside of the B-Class, with all models gaining new seat fabrics and smarter aluminium-effect trim on the dashboard. An increased audio specification is also new to the B-Class, with Bluetooth phone connection now available on a wider range of models plus the option of the Mercedes-Benz COMAND sat-nav system.

Our verdict on the Mercedes-Benz B-Class B180 CDI Sport

The B-Class remains an unusual choice from a manufacturer that usually offers a more sensible option. It is extremely practical, making excellent use of its space, yet retains the premium feel that is a part of the ownership experience. It is, however, likely to be overlooked in favour of a conventional MPV or hatchback at a lower price.

The diesel engine options provide strong economy, but this is the only area in which the B-Class is inexpensive. A high purchase price with expensive options is a negative factor and servicing is also likely to be higher than average. One compensation is that residual values are likely to be stronger than the class average.

One of the few distinguishing features of the B-Class is the incorporation of the sandwich concept that first appeared in the A-Class. Thanks to the space-saving arrangement of positioning the engine and transmission partly in front of and partly beneath the passenger cell, the interior can remain relatively uncluttered despite the presence of a puzzlingly large transmission tunnel. With rear seats folded, the B-Class's true nature as a compact estate becomes apparent and it is able to swallow surprisingly large loads. The removable front passenger seat is a particularly neat touch.

The main controls for the heating, air-conditioning and communication facilities such as the radio and navigation system are positioned directly below the centre vents. Rotary switches and high-quality buttons all operate with a solid and satisfying click. The centre console is extended with a high tunnel covering featuring a centre armrest with an integral stowage drawer that can be adjusted fore-and-aft.

The B-Class offers a good standard of comfort, with supportive and well designed seats. Wind and road noise levels are quite low too, though the Sport model offers less comfort than SE models due to the stiffer suspension. In fact the ride quality becomes a little uncomfortable, without a discernable benefit in terms of handling.

Mercedes' B-Class has remote central locking as standard with a factory-fit alarm and immobiliser, a visible VIN, automatic door-locking when driving off and several places to hide valuables away from prying eyes.

The B-Class feels solid and its fairly wide stance promotes a sense of security. The chassis' sandwich concept has advantages in the event of a lateral collision because the occupants are seated 20cm higher than they would otherwise be, and therefore above the impact zone. ESP comes with a feature called Steer Control, which provides servo assistance in emergency situations. Adaptive, two-stage front airbags, belt tensioners in the front and on the outer rear seats, adaptive belt force limiters, active head restraints, Isofix child seat attachments and newly developed head/thorax sidebags round off the standard occupant protection system.

The B-Class is best suited to a sedate driving approach as its dimensions and driving position are closer to an MPV than a conventional hatchback. The diesel engine has a decent slug of torque from low revs, and while the CVT gearbox may seem odd at first to the uninitiated, it works well to extract the most from the engine. The chassis is safe and predictable rather than spirited however, even in Sport trim with stiffer suspension.

The B-Class is at its best when deployed as a family vehicle, with a good deal of space inside for five passengers. The flexible seating arrangement is also useful, allowing the space to be tailored to the needs of the occupants. Carrying a mountain bike or other bulky sports equipment is certainly possible.

The B-Class is unlikely to offer much in the way of first car appeal. Not only is it an expensive car to buy, it is primarily a practical family machine and doesn't really have the style or kudos that would appeal to a new driver.

The B-Class displays the same level of build quality that has marked out more recent Mercedes-Benz models and represents a return to form that brought the manufacturer such great success in the first place. In terms of image the B-Class struggles somewhat, as it has neither the class of the bigger models nor the cute cleverness that marks out the smaller A-Class.

The sandwich floor concept pioneered in the A-Class means that seats are positioned fairly high, which in turn means that getting in and out of the B-Class is easier than in some rivals. All doors are of the conventional variety with no surprises. They do not quite open to ninety degrees but are lighter than they look.

A multifunction steering wheel is included as standard, allowing the driver to operate the car radio, telephone, navigation system and other units from the steering wheel. The standard audio unit is improved on the new B-Class and the sound quality and operation of the unit is of a good standard.

Thanks to an upgrade in cabin materials the B-Class has a better cabin than before. The mix of plastics and cloth is pleasant and lighter colours add to the feeling of space. On the outside, the B-Class's unusual shape is best served by more sober hues.

The power steering effectively lightens steering when parking or manoeuvring slowly and the B-Class's compact nature makes it easier to place accurately than an urban 4x4 or full-sized people carrier. The near-vertical tailgate makes it easy to place the car when squeezing into a space.

Tyre repair kit is standard, with the spare wheel recess serving as a hidden stowage space.

Volkswagen Golf Plus Similar twist on a conventional car, but without innovative layout