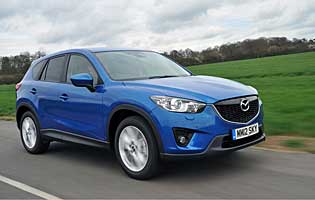 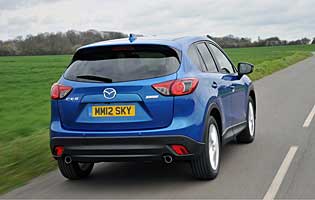 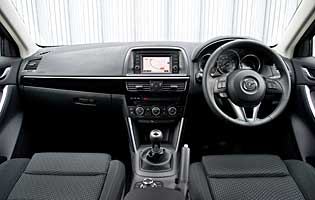 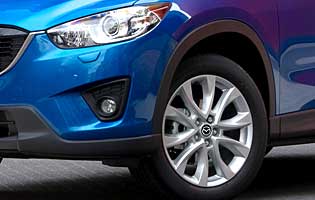 The Mazda CX-5 has won a great deal of acclaim since its launch. A combination of technologies that simultaneously make it environmentally cleaner and also better to drive than its rivals has brought many awards from the industry. However, the praise has been directed almost exclusively at the diesel. The petrol model is a slightly different proposition.

The CX-5 is Mazda's first attempt at a compact SUV, following in the footsteps of the larger CX-7. In the wake of the global economic crisis, skyrocketing fuel prices and rising road tax, Mazda knew it would have to pull out all the stops to be competitive in what is one of the fastest-growing market sectors in Europe.

By pushing the boundaries of combustion technology and designing greater efficiency into the car in many other ways including lighter weight and friction reduction, the CX-5 has moved the game on at the first time of asking. The technologies, collectively known as SkyActiv, have also been earmarked for many more Mazda models including the flagship 6 saloon.

Mazda used lessons learned from the MX-5 sports car in designing aspects of the CX-5's chassis and gearbox, giving it a more engaging feel than is typical for the sector, but not at the cost of efficiency. The petrol engine, only available with front-wheel drive and a manual gearbox, is arguably better than the diesel in terms of driving fun.

This is not the entry-level model, although the petrol engine is cheaper than the diesel. Sport is the higher of two trim levels and brings extra styling features that make more of the car's bold lines. It is well equipped and the overall package feels balanced in the features it offers, and even the real-world fuel economy is impressive.

The CX-5 is supremely well rounded, especially considering Mazda had no prior experience building cars like this. This petrol version needs to be treated gently to achieve its fuel economy potential, but there is a real sense of enjoyment to be had from driving and owning it. That, alongside relatively low buying and ownership costs, makes the petrol CX-5 a great option for drivers who cover lower than average mileage.

While this petrol model will need filling up more often than its diesel counterpart, its purchase price is significantly lower. Buyers will need to do the maths to work out whether the petrol makes better financial sense over the planned ownership period, which it is likely to for some. For the lowest benefit-in-kind rating this isn't the model to choose; the diesel equivalent has a lower tax grading. The petrol is also predicted to retain slightly less value than the diesel.

There is a large boot space available; not quite on par with the most capacious hatchbacks on the market but still enough to ensure serious load-carrying ability. The luggage cover is removable and allows significant extra room for taller items. Two slight recesses in the boot sides allow for small bags to sit without rolling around, while small compartments are available under the boot floor. In the cabin, the door pockets are disappointingly small but the storage bin between the front seats is very useful.

The controls are predictably laid out with two ancillary stalks and steering-wheel mounted buttons for the cruise control and the stereo. The CX-5's automatic headlight function means that drivers don't necessarily need to worry about finding the light switch anyway. The instrument cluster is neat and clear, but the sat-nav screen, although perfectly functional, is not among the clearest. It would benefit from a higher resolution screen.

With leather upholstery and a range of amenities to enhance comfort, especially in the heated front seats, this is a moderately comfortable choice. Some people may find its suspension a little too firm at times; a trait not helped by the 19-inch wheels on this Sport model. Legroom is in plentiful supply, though, and four adults will certainly be comfortable over long distances. Cabin refinement suffers at higher motorway speeds as wind noise becomes evident around the large door mirrors.

There is a Thatcham category one alarm and immobiliser fitted as standard. The alarm has two separate parts; one monitoring system for the outside of the car and one internal system that uses sensors to detect any movement inside the car, for example if a window is smashed. The latter can be deactivated via a button inside the car and also a separate button on the remote key fob, so that pets or occupants won't set the alarm off if the car is locked.

Dual front, side and curtain airbags are standard fit, along with a sophisticated stability and traction control setup. The two encompass a number of other support systems that manage safe braking, cornering and acceleration. This version, as a two-wheel drive model, does not have the inherent traction advantage of the four-wheel drive models, but outright grip is the same. A clever addition is Smart City Brake Assist, which hits the brakes if a low-speed collision may happen and the driver hasn't reacted.

Some aspects of the CX-5's driving experience are very impressive, like the slick and positive gearbox that makes the car feel more engaging. The petrol engine is hungry for revs and needs them to reach its performance potential, but the surprise comes in how relatively little the car rolls around. With such excellent body control comes a confidence-inspiring feel behind the wheel, while the steering itself is for the most part consistent; if a little slow in the initial turn-in.

The obvious flaw in this model's family suitability is perforated leather, which is not ideal if children spill food or drink. On the other hand, its high roof line and perfectly placed rear bench make installing child seats to the supplied Isofix mounts. The boot has also been designed with ease of use in mind, and families will appreciate the level load floor and the plentiful space available. The merit of this engine choice will depend on each owner's driving style and mileage.

Although the CX-5 represents good value for money against the competition, it's far from being a cheap car. The purchase price is not likely to be affordable for first-time car buyers, although the running costs could be within reach. Many young or inexperienced drivers would see the CX-5 as a big car and potentially intimidating, which is another barrier, and insurance is unlikely to be cheap - if available at all - for drivers without significant time and mileage under their belts.

This model marks a new Genesis for Mazda, whose products had begun to fall behind the competition in some ways. Mazda has an excellent reputation for enduring reliability as its cars age, especially in its petrol engined models, and it's unthinkable that the firm would let standards slip with such an important model. The brand image is one of a sporty Japanese manufacturer who very deliberately does things differently, placing a greater emphasis on driver enjoyment. Linked with a new-found flair for efficiency it's a potent combination.

The CX-5's seats are set at a perfect height to allow comfortable access. The roof is also high, so there's little need to duck on the way in. The doors feel substantial but not too heavy, and they open to angles that are just about perfect for bay spaces. The only real problem is at the boot, where the tailgate lip hangs quite low even when opened all the way. People of over six feet tall run the risk of hitting their heads on it.

As standard Sport models come with an upgraded Bose stereo, which doesn't in itself change the functionality of the system but does offer fuller sound. This model has a colour touch screen interface that could ideally be bigger, because some of the on-screen buttons are a little small. The interface is very easy to understand throughout multiple functions, but it can be confusing looking for specific functions, because some are condensed into the same buttons. Helpfully, there are basic audio controls on the steering wheel.

Mazda has chosen a very standard selection of colours for the CX-5, including a spectrum from black to white that takes in silver, grey and a pearlescent white. But although black is a sure-fire winner, a dark blue is also available and looks stunning on the CX-5's flowing exterior. The interior trim follows the Japanese style, which is to say that it doesn't look as opulent as some European cars', but the aesthetics are clean, modern and uncluttered.

The CX-5 comes with a complete range of parking assistance systems, including front and rear parking sensors and even a reversing camera, which displays the rearward view on the colour screen interface mounted on the centre console. Superimposed on the screen is the path that the car will follow with the current steering angle. The car's raised driving position is also a help in parking situations.

Skoda Yeti Extremely capable both on and off road, with accomplished engines

Vauxhall Antara Lower entry price is tempting, but the Antara lags behind in some areas