Bold styling is clearly distinct from any rival 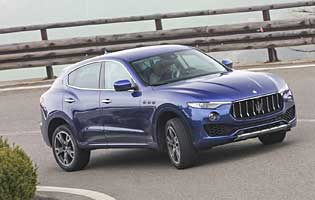 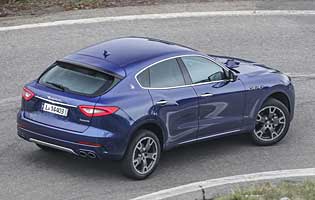 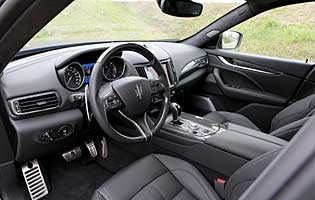 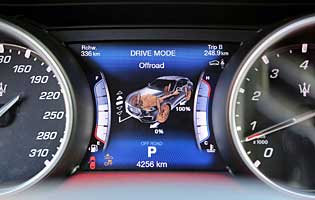 The Levante represents both the first SUV project ever undertaken by the Maserati brand and a significant step towards greater profitability. The sector into which the car is launching is well known for being highly lucrative for the likes of Porsche and BMW, so it made sense for the Italian brand to target sales here.

In truth the Ghibli saloon started the company's push towards volume-selling models, but the Levante is based on the same chassis. To equip it for off-road use most of the parts have been strengthened, stiffened or otherwise enlarged in order to raise the ground clearance and take greater punishment.

Maserati has aimed high for materials quality in an attempt to turn people away from rival cars with more established presences in the market. It fuses Italian styling and a profile instantly recognisable as a Maserati with heavyweight engineering. The final product is well over two tonnes but can cope with a wide variety of surfaces without cracking.

However, nice as the interior is, actual build quality must still come under scrutiny. The test cars revealed plenty of trim rattles over bumps, which compares badly to the extremely accomplished rivals that the Levante has to beat.

The diesel model is expected to be the volume seller in the UK, where its emissions and fuel economy make it much cheaper to run than the petrol. It doesn't produce a great deal of torque or power in relation to the car's weight, but refinement is a stronger suit. Tall gearing and exceptional noise deadening inside the cabin make sure the Levante stays super-quiet on the motorway.

Our verdict on the Maserati Levante Diesel

The Levante is a slightly confusing end product in that the sporting drive it was designed to deliver is not as great a strength as Maserati would like to claim, and yet the car excels at the other end of the scale with fabulously refined cruising. A buyer will need to understand that this car doesn't do exactly what it says on the tin, but has other worthy talents instead.

Optional extras could easily add GBP10,000 to the car's price, but it's the same across most of the Levante's rivals. Depreciation will bring the greatest financial burden and the Levante is likely to lose a lot of money in its first years on the road unless customer demand outstrips supply. Fuel for the diesel will not cost more than the class average, but insurance for a car whose spare parts are less readily available than some might prove expensive.

The company has prioritised passenger space and room for the complex engineering over outright boot space, but there is still a healthy 580 litres available. That should prove enough for the vast majority of potential buyers, whether they will use the car for family life or for business. On the other hand the high-quality leather is easily scratched, which could be an important consideration.

The Levante's displays are quite orthodox, using two analogue dials split by a simple LCD screen. The graphics, shared with the main 8.4-inch screen in the centre console, are a bit dated but the layout of sub-menus on the latter screen mimics the layout of smartphone apps. A dual-layer control dial near the gear lever is a neat and efficient touch, but the single ancillary stalk is too crowded with functions.

The ride quality is good, even on the large wheels worn by the test car. Of the driving modes available, it is best to stick to Normal, but a single press of the Sport button will activate a sharper engine mode without engaging the firmer suspension. The seats are built for the amply proportioned person and anyone of slim-to-average build will find them comfortable in a straight line, but lacking in lateral bracing for corners. There is lots of leg- and headroom for all passengers.

A clever touch is HomeLink, an optional remote control integrated into the dome lighting unit on the head lining. It can be programmed to open garage doors, gates and even to activate security lighting on approach, meaning that the driver can stay at inside, at lower risk. Plus it can work with up to three separate systems, like second homes and an office location. It would nonetheless be a good idea to install a tracking device to such an expensive car.

From simple touches like LED tail lights that illuminate slightly faster than conventional bulbs, to optional adaptive front lighting, the Levante has a lot of safety features. Unfortunately, many of them are optional and expensive. The Q4 four-wheel-drive system and rear axle limited-slip differential are standard, adding wet-weather traction. Blind spot warnings, hill descent control, forward collision warning, park assist and adaptive cruise control are all available, putting the car at the forefront of the class - for a price.

The main appeal among the Levante's driving talents is how refined it is at a cruise. Its motorway-speed quietness is hugely impressive, and even speeds way beyond the UK legal limit are greeted with extremely low levels of noise. It's also a fine machine for twisting roads, as long as the surface is smooth. Choppy asphalt can upset the chassis, especially after selecting the Sport suspension mode, but in Sport the highly adaptable air suspension controls roll impeccably. The one significant failing is that the diesel version simply isn't as quick as a Maserati buyer might expect.

With so much interior space and a large boot, the Levante could make a very effective family car as long as the external dimensions are not an issue. Its boot is large enough to hold buggies or pushchairs, plus toys or hygiene accessories. Owners would have to be careful when it came to messes made by children, though, because the soft leather could be vulnerable to damage and staining, despite basic protections to its surface.

A Maserati is more likely to be a poster car for a first-time buyer than an actual contender for their cash. The exotic badge brings with it high costs for insurance, fuel and purchase, which put it beyond the financial reach of novices. Its size would also make it too difficult for an inexperienced driver to manage on the road.

There's no doubt that the Levante's materials quality is high, but the build quality still leaves something to be desired. Bumps in the road sometimes reveal trim creaks and rattles. On the plus side, the Maserati badge has a certain cachet that rival cars can't match. It's a more exotic buy and has a very strong image. The petrol model has even more in its favour, though, since its engine is built by Ferrari.

Such a large vehicle will always necessitate a step upwards into it, and there are wide door sills to bypass on the way. It's not for the very elderly or infirm, who may struggle to find the stability to make the manoeuvre safely. For everyone else it's fine, and children may even see the climb as something of a mini-adventure. The tailgate is powered as standard, opening via the appropriate key button and closing with a press of another just inside the base of the tailgate itself.

An eight-speaker stereo system is fitted as standard, but many owners are likely to upgrade to the 12-speaker Harman Kardon system. The upgrade also comes as part of the Luxury Pack; a collection of comfort and leisure-focused upgrades. Media can be played via SD card, USB, Aux, Bluetooth and DAB digital radio, and the three USB slots - one at the front, two for the rear seats - will all exchange data and charge the device.

A total of 28 different colour combinations can be contrived from a varied list of paint colours and several options for the leather seats. Italian boldness comes through in the brighter colours, which include a strong mica blue. The interior looks high-quality and stylish. Bar a few cheap details it looks classy from the small analogue clock at the top of the dashboard to the finely-stitched seats.

At over five metres the Levante is the longest car in the class, which presents the need for caution in parking manoeuvres. The turning circle is naturally quite wide, too, which also contributes to a car not suited to tight city streets. However, there are a number of driver aids to help. A reversing camera is a good feature but it could be sharper, but the 360-degree view offered by the four linked cameras at all sides, once a driver is used to it, makes parking much easier.

Audi Q7 Large, comfortable but in no way exciting