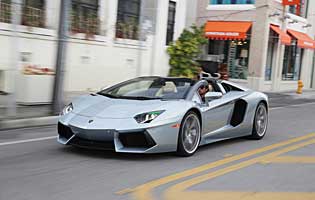 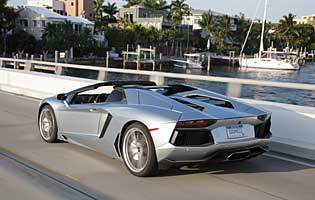 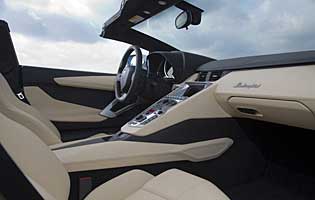 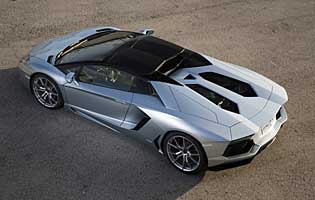 Drama is never in short supply where Lamborghini is concerned and therefore a natural progression of the spectacular Aventador supercar is the introduction of a drop-top Roadster version. Packing the same V12 power unit and clever technology, the Aventador Roadster incorporates a two-panel roof system to allow fresh air motoring - even above 200mph.

In a rarefied world where money is almost no object and being seen is the most important thing of all, a car like the Aventador Roadster makes perfect sense. It is a logical progression from the coupe version, but even though it shares all the mechanical components of its sister car it is inevitably slightly compromised and a little heavier as a result.

The exterior design has been kept as close as possible to the coupe, including the view into the engine bay. The actual structure of the car remains an advanced carbon fibre design and this has helped to make the integration of a convertible roof much easier.

Rather than a folding metal or fabric system the Aventador Roadster has a two-piece composite roof that needs to be manually installed. Tilting the seat forward reveals a catch, and each six kilogram panel can be pulled out of place and then stored in the boot at the front of the car. The whole process takes around one minute, but does reduce the volume of the boot considerably.

Elsewhere the Aventador is identical to its coupe sister, with an automated manual gearbox delivering super fast gearchanges, pushrod suspension that shares its basic principles with a Formula 1 car and the adoption of TFT-screen for the instruments and supplementary displays illustrates the progress the Aventador represents.

Our verdict on the Lamborghini Aventador Roadster

Removing the roof of the Aventador avoids many compromises that are normally associated with this kind of car. It matches the coupe for performance and handling, and with the roof up at least it offers as much practicality as its sibling. The biggest issue is cost, but with any car competing in this market, this is only an issue for those who can't afford it.

There is no escaping the fact that the Aventador is one of the most expensive cars currently on sale in the UK. A purchase price of close to a quarter of a million pounds combined with the highest CO2 bracket and the likelihood of spectacular insurance premiums make this a car for the truly wealthy. Despite its inevitable rarity it will also lose a substantial amount of value over several years of ownership.

Despite being nearly five metres in length the Aventador is far from being a spacious car. The two occupants do enjoy all the room they could possibly need, even offering decent headroom despite the low roofline. The small boot up front is rendered almost obsolete with the roof panels stored within, but this will be of little concern to many buyers.

For the first time on a Lamborghini there are TFT screens in place of conventional dials, and this gives the Aventador driver the opportunity to alter the display to suit their requirements. Two smaller screens either side of the main display offer a wide range of information, although the control to cycle these is rather awkwardly mounted on the bottom of the windscreen wiper stalk. The rest of the switches are clearly labelled and finished to a high standard.

With the focus clearly being on performance and handling, comfort inevitably takes something of a back seat with the Aventador. With three electronic modes for the car a 'softer' setting slows the speeds of the gearshifts and softens the suspension, although this is a relative change and anyone coming from a conventional car will find it somewhat noisy and firm-riding.

A car this desirable and at this price point needs the highest level of security, and alongside a standard alarm and immobiliser the Aventador requires a degree of prior knowledge in order to simply get the doors open and start it up. An optional vehicle tracking system should be a default choice for any potential purchaser for total peace of mind.

Although terrifically fast the Aventador is a car that ranks very highly in terms of active safety. As well as a switchable ESP system it has extremely powerful carbon ceramic brakes and astounding levels of grip. Should the worst happen the combination of numerous airbags and an extremely strong carbonfibre structure will protect its occupants from the worst effects of an accident.

More than in any other segment a supercar needs to deliver an appealing driving experience, and the Aventador does this to quite stunning effect. The combination of the enormously powerful engine and rapid-fire gearbox provides truly savage acceleration - the Aventador is one of the fastest-accelerating cars money can buy - while the handling and grip on offer makes it surprisingly sure-footed and benign given its power. The Roadster brings no apparent compromises compared to the Coupe despite being slightly less structurally stiff and a fraction heavier.

Helpfully the Aventador has Isofix mounting points on the passenger seat and a switchable airbag making it possible to carry small children, although outside of the occasional short journey it is not really suitable for heavy family duties. With room for only one passenger and limited luggage space, it is far from being a practical proposition.

Even a lottery winner choosing an Aventador as their first car would soon struggle with aspects other than the huge running and purchase costs. The sheer power on offer makes the Aventador a car for the experienced driver only, and although easy to drive in relative terms a firm hand and decisive inputs are required to avoid getting into trouble.

Compared to its arch-rival Ferrari, Lamborghinis are generally viewed as being less technically-advanced and with much less of a motorsport pedigree, but the focus on pure adrenalin in terms of looks and performance still make them an object of desire for enthusiasts. Quality has also progressed enormously under Audi's stewardship, and the Aventador feels like a quality product inside and out.

The scissor doors could easily be dismissed as an unnecessary piece of street theatre, but the reality is a conventional door of this size would require a huge amount of room to open fully. As it is, the scissor doors open upwards easily and although the seats are set understandably low, getting on board is much less of a challenge than it could be, particularly with the roof down although the roof aperture itself is not huge. Access to the boot is straightforward but engine access requires the passenger seat to be moved forward.

Anyone familiar with a recent Audi product will instantly recognise the audio and sat-nav system in the Aventador, but it is none the worse for that. The clear display is mounted centrally and the combination of a rotary controller and surrounding buttons make it easy to navigate. The audio system offers radio, CD and MP3 playback plus Bluetooth and iPod connectivity, which should be enough for most people's needs.

Such is the drama of the Aventador's exterior it looks like little else regardless of the exterior colour. The Roadster comes in two new colours including a pale metallic blue which looks very smart. Inside the colour scheme is more subtle but the trim is of good quality thanks to the influence of parent company Audi, and there are many options for colouring the leather and other materials.

Putting a car of this value in any kind of parking space can test the nerves of anyone, but the Aventador does its best to help. Rear visibility through the screen is poor though the side mirrors do allow the driver to see something over the shoulders. Parking sensors front and rear plus a reversing camera do help, although steering lock is relatively poor and a delicate touch is required on the accelerator to move slowly.