Imposing front grille marks out the XJ amongst rivals 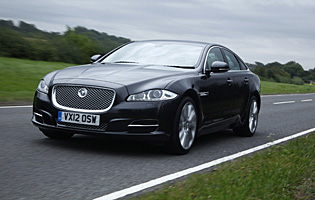 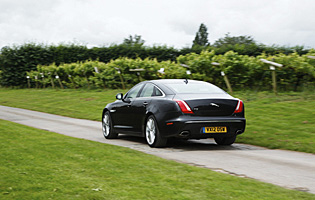 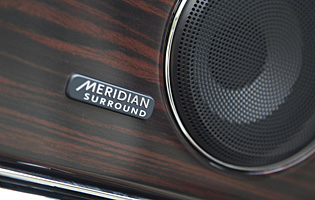 Jaguar's XJ model has been the flagship of the range since the 1960s, representing the pinnacle of the brand's luxury and sporting flavour. 2010 saw the all-new XJ arrive to redefine the saloon for the 21st Century. Now Jaguar has moved the XJ forward again with new engine and gearbox engines, an improved specification and even more options.

Jaguar made a bold move in the right direction with the current generation XJ, avoiding the trap of slavishly aping designs of the past and creating a modern design that will appeal to new buyers as well as Jaguar fans. It is much closer to a four-door coupe than a conventional 'three-box' saloon, and in taking this route Jaguar is setting the XJ apart from its more conventional rivals.

The elegant exterior is once again formed from aluminium, as is the majority of the car's structure, with other lightweight materials such as magnesium used in specific areas. By doing so Jaguar has ensured that the XJ is significantly lighter than the competition, even the similarly-aluminium Audi A8, bringing benefits in terms of performance, efficiency and economy. At launch as much as 50% of the aluminium used is recycled, with the aim to increase this to 75% in a few years.

The latest updates to the XJ improve efficiency still further, making the most of the lightweight design through the introduction of an eight-speed automatic gearbox first seen on the smaller XF model. With eight ratios including a long top gear and stop/start as standard, Jaguar claims an improvement of 14% over the outgoing model. Also available for the first time is the brand-new supercharged V6 petrol engine which will also be available in the XF and new F-Type sports car.

Our verdict on the Jaguar XJ 3.0 D Portfolio

The XJ was already a highly accomplished and capable luxury saloon, and although relatively minor the detail changes have improved it still further. The new transmission is a perfect fit for the XJ, boosting economy while providing very smooth and responsive performance. The XJ is a pleasure to drive or ride in and still manages to provide an essence of sportiness when the conditions are right.

Running costs will of course be at the higher end of the scale, but opting for the diesel version brings very respectable economy and emissions performance, and therefore brings the running costs down to a more acceptable level.

The XJ offers sufficient space for four or even five adults, but it is not a massively spacious car. It is unquestionably luxurious but instead it cocoons its occupants in style, and the low roofline and compact windows give it an intimate feel. In practical terms the boot is well-sized and can be remotely opened, although cabin storage is average for a car of this size.

The cabin layout of the XJ is particularly impressive, with much of the car's systems controlled through the touch screen. Available with the innovative Dual-View system it allows the passenger to view TV or a DVD while the driver can only see system screens or the satellite navigation. Additionally the driver's instruments are displayed virtually via a high-definition screen, bringing high levels of clarity and the ability to display a wide range of information.

With features like massage seats and four-zone climate control, getting comfortable is rarely an issue in the XJ. Noise levels are impressive too, with wind noise only becoming apparent above 70mph. The ride comfort was already impressive but further tweaks on this latest model have arguably improved things still further, and the Jaguar remains composed yet very comfortable on a range of surfaces.

All XJ models come with keyless entry and start, plus a high specification alarm with battery back-up, which should prevent even the most determined thieves.

A high complement of safety equipment comes as standard with XJ, including a minimum of six airbags and tyre pressure monitoring on some models.

The Jaguar XJ perhaps pitches itself as more of a driver's car than most of its rivals in this sector, and it does a good job of staying true to its roots. Driven sedately it is very relaxing and undemanding, and should the need arise it can be pushed along quickly whilst remaining composed and enjoyable. The strong diesel engine and super-slick automatic transmission are as adept at cruising as they are sprinting too.

Although it is quite obviously a luxury car the XJ has the space and comfort to make a decent family car. Especially if fitted with the optional rear entertainment package which will keep the rear passengers very happy on long journeys. The standard leather seats will also stand up to sticky fingers and crumbs much better than the cloth equivalent.

The XJ is not only far too expensive for a new driver but is more than likely too large for their needs and will too costly to insure.

At this price point high levels of quality are expected, and the Jaguar scores well. Both inside and out it feels like a coherent design with plenty of nice touches, and the general standard of materials is very high. There are one or two signs of cost-cutting however, which puts it just behind the best German rivals. The XJ's image however is something which is likely to be its greatest appeal, as it builds on the past but also looks forward with the bold exterior design.

Long wheelbase versions of the XJ inevitably fair better in this respect, but in either model the large doors aid entry. The relatively low roofline may mean taller passengers will have to duck more than in a rival product, but it is otherwise without fault.

Jaguar has switched to a high-end audio firm Meridian to produce a system for the XJ, and fitted as standard to Portfolio models it delivers a superb sound, offers a wide range of inputs including digital TV, DVD and now DAB, and is easily controlled via the touch screen or steering wheel controls.

As the XJ has large blacked-out rear pillars, choosing a light or dark shade can quite dramatically change the car's appearance. Unusually for a car in this class, it looks equally good in black or in silver. The cabin trim allows lots of personalisation options, with lots of leather as standard and a choice of woods and other trims.

Such a long car with relatively narrow window lines could make parking a tricky task, but the light power steering and standard parking sensors are a help. A reversing camera is either standard or available as an option across the range.