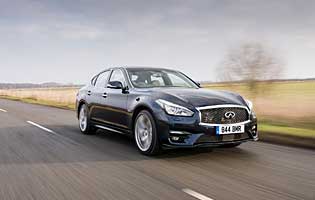 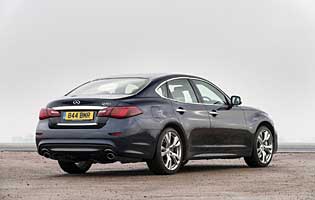 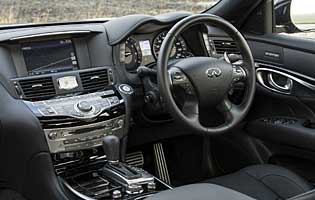 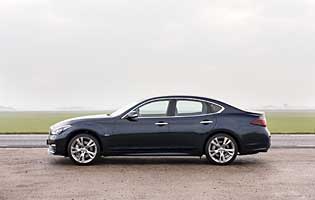 Infiniti is continuing its push into the premium sector in Europe, and following the introduction of its new compact Q50 it has updated its bigger brother, the Q70. Across the range there are updates to the equipment levels, exterior design, LED lighting front and rear and mechanical enhancements.

The Q70 may be a bit player in the mid-sized premium saloon segment but it has a crucial role to play in establishing Infiniti as a viable choice in what is a very competitive sector that is dominated by long-standing German rivals. The sub-brand of Japanese manufacturer Nissan has been selling cars for many years in the US, but is still in its infancy in the UK.

The Q70 comes in saloon guise only and the updated models benefit from some small detail changes to the exterior. Both the front and rear bumpers have been changed to bring it more in line with the smaller Q50, while all versions gain full LED lights front and rear. Sport models gain a further change to the front bumper as well as a new design of 20 inch alloy wheel.

Mechanically there are a number of changes. Firstly the 2.2-litre diesel unit replaces the outgoing 3.0-litre V6 unit, and the newer Mercedes-sourced four-cylinder powerplant brings with it improved emissions and economy performance. Elsewhere the Hybrid version has increased power and torque yet still manages to offer reduced emissions and better economy than before.

To reflect the changes in specification and engine line up the model range itself has been revised, with Premium, Sport, Premium Tech and Sport Tech making up the new range. All models are available with the 2.2-litre diesel, the 3.7 model is available in top-spec Sport Tech guise only and the Hybrid comes in Premium and Premium Tech only.

Our verdict on the Infiniti Q70 Premium Tech Hybrid

The Q70 has one of the toughest tasks to crack the mid-sized premium saloon segment, and competent though it is it lacks the style and cache that many buyers are looking for. The Hybrid version is fast, refined and impressively economical, although dynamically it is capable rather than entertaining. The specification is excellent and represents good value, although residual values may well diminish any initial savings.

Running costs for the Q70 Hybrid should be a little more competitive than many of its rivals offering similar performance, thanks to the performance boost and electric running available due to the dual powertrain. Insurance costs will be broadly in line with rivals at the higher end of the scale.

Although not really designed for carrying, the Q70 does a good job of hauling passengers and luggage. Occupants in particular are well catered for, with good head and legroom regardless of where you are sitting. For boot space the Hybrid Q70 fares more poorly compared to the other models in the range as the actual boot area is encroached upon by the hybrid powertrain.

The cabin layout of the Q70 is relatively easy to understand, and helpfully uses the dual input method of a touchsceen and a control knob, allowing the user to choose whichever they feel most comfortable with. Although the graphics on the system are looking a little dated, the system works well and has plenty of features, although it does without the ability to use apps which is now becoming more commonplace.

Large and electrically adjustable seats in the front make getting comfortable easy, while the cabin is spacious and designed for maximum comfort. Higher specification models even come with a feature called Forest Air, which alters the delivery of the climate control to avoid fatigue in the driver and passengers.

A high level of security comes as standard with the Q70, with an alarm and immobiliser as standard on all models. Remote central locking with keyless entry and start is also standard, which means the driver can keep the key safely on their person.

The Q70 has the potential to be a very safe vehicle. Firstly it is substantially sized and very well built, and it is also packed with safety system including Around View Monitor and Moving Object Detection, sophisticated systems designed to prevent collisions with automatic braking.

The key appeal of the Q70 in Hybrid form is the dual nature that the powertrain offers. In normal or economy mode it is very quiet, silent at times and offers a very easy-going nature with the automatic gearbox changing smoothly between gears. On the other hand it also offers impressive performance, with the combined petrol and electric power delivering rapid acceleration with ease. This makes the Q70 an excellent car for covering long distances as it remains refined whatever the circumstances. When driven quickly it is capable rather than exciting.

For a family of four or even five with older children the Q70 could make a respectable family car, thanks to the amount of space on offer, comfortable cabin and high equipment levels. However families with smaller children will find the reduced boot space of the hybrid version something of an issue.

It is unlikely that the Q70 will appear on the radar for first time buyers as it requires a substantial financial investment, and it is also aimed at a more senior buyer rather than those in their late teens and twentys who are typical first car buyers.

The quality on offer in the Q70 is of a high, if not the class best standard. The cabin is reassuringly solid and in general the materials are of a good standard, with just the odd piece of cheaper plastic dotted around. The Infiniti brand has something of an image problem in that it is still trying to generate one. For some the badge will still be an unknown, although it is heading in the right direction thanks to the prominence of the badge within Formula One.

Using its size to its advantage the Q70 offers easy ingress for front and rear passengers, with substantial doors front and rear. The same goes for the boot, which can be electrically operated via the key or a button in the cabin and has a relatively low lip for easy loading.

Even as standard the Q70 comes with an impressive audio system with the option to upgrade to a Bose system on Tech models. Regardless of specification satellite navigation as standard, although it is not a brand-new system it still works well.

The Q70's exterior is one of its most challenging aspects, and is quite colour sensitive. Darker hues soften the curves while lighter shades lessen the effect of the chrome. However it is of course a matter or personal taste. Inside there is a mix of leather and wood trim but there are several choices available to avoid the common dark grey plastic.

The Q70 is a relatively long car and the sloping bootlid means it cannot be seen very clearly from the driver's seat. However parking sensors and a reversing camera are standard which take a lot of the strain out of parking, leaving only the large alloys wheels to be wary of when getting close to the kerb.