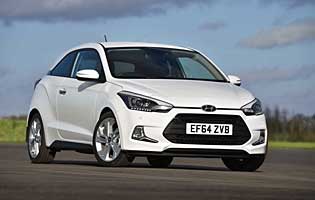 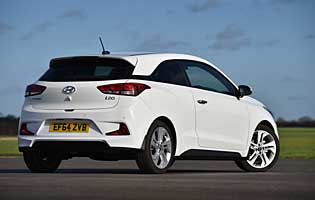 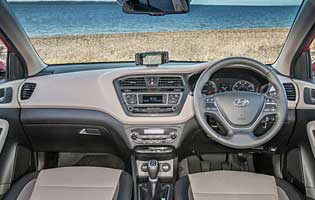 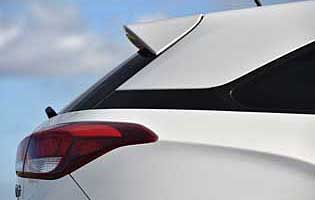 Always a brand with value in mind, Hyundai has travelled a long way in a short space of time by boosting the appeal of its models beyond simple financial good sense. Better quality, sharper design and a more engaging driving experience are now key attributes, and the newly-introduced i20 Coupe is a prime example.

Any supermini worthy of the name has to appeal to a wide range of customers but even at the lower end of the price scale buyers aren't willing to accept clunky styling or a lack of equipment. The recently introduced i20 has brought Hyundai's new approach to the segment, with a more grown-up feel. Now it has added the i20 Coupe to the range for the more fashion conscious buyer.

Targeting younger buyers, Hyundai is seeking to differentiate the i20 Coupe from the five-door model by giving it the coupe tag. Although strictly speaking it is closer to a three-door version than a completely new car there are a number of differences between the two. Most importantly the roofline has been lowered by 25mm, while it also gets a unique design of front bumper.

As with the five-door version there is a high level of standard equipment. Features such as the reversing camera with a readout in the rear-view mirror are rare in this class, while all models benefit from cruise control, Bluetooth and rear parking sensors. The Coupe also comes with a unique colour choice not available on the five-door model.

Mechanically the i20 Coupe uses the same engines and suspension settings as its five-door sibling, which means at present the engine options are limited to one petrol and one diesel offering, with a five and six-speed manual gearbox respectively. However Hyundai has indicated a broader engine range to come, with a new generation of turbocharged petrol engines in development.

Our verdict on the Hyundai i20 Coupe SE 1.4 CRDi

The i20 remains a great prospect for a sensible private buyer on a modest budget, delivering a decent driving experience, good equipment levels and an appealing package. There are cars with better dynamics and more quality on the market but not at this price level, and the added dose of style compared to the five-door model will be enough to sway some prospects in its favour.

The loss-leading entry-level S model is significantly cheaper than the versions that most people will be likely to want to buy, but comparing its list prices directly to those of its rivals results works in the i20's favour, especially when bearing in mind its standard equipment.

A large boot, measuring 326 litres, offers luggage-carrying capacity almost equal to cars from the size class above. It features a two-level boot floor, which can be moved to either maximise overall capacity or to leave a flat load lip for ease of loading and unloading heavy items. The door bins are worth of particular note, offering plenty of space for even larger items.

Hyundai has laid the main instrument cluster out with its eye primarily on ease of legibility at a glance, and the straightforward white-on-black design is exceptionally successful in that regard. It could benefit from a few colourful design flourishes, though. The central LCD screen between the speedometer and rev counter is good, offering a huge variety of data readouts, but again it is perhaps a little over-simple in its design.

There is a higher-than-average degree of support on offer from the i20's front seats, especially laterally, which helps to keep people in place and impart an increased sense of stability and safety around corners. The seats themselves are blessed with a good balance of softness for short journeys and firmness for increased support on long trips. The driver has an armrest, too, although the driving position does not adjust as much as it could.

Remote central locking is standard on all i20s, so there will be no need to put the key in the door or have passengers lock their own doors, as can be necessary on some cheap cars. Deadlocks are included in the system. The central storage bin between the front seats provides secure storage for all models, while Sport and Sport Nav models also feature darkened privacy glass around the rear half of the car.

While a quota of six airbags does not quite match the class leaders, the i20 has the self-explanatory Hill Start Assist, stability control, tyre pressure monitors, a speed limiter and the option to add lane-departure warnings. Overall, the car is more or less at the forefront of safety provision for vehicles of this size. Increased use of high- and ultra-high-tensile steels have also helped to strengthen the car's shell while making it lighter.

The i20 Coupe delivers an accomplished driving experience, which manages to be both reasonably good fun but also stable and undemanding. The diesel offers a more relaxed drive thanks to its increased torque over the petrol, but the later has sweeter steering as a result of less weight and feels more composed through bends.

Although it offers good space in the cabin and in the boot for a car of this size the i20 Coupe's three-door configuration means getting in and out of the rear seats is only really suitable for children old enough to do so themselves.

The i20 Coupe's kerb appeal is bound to win fans amongst new drivers, is affordable to buy and run, is easy to park, should last the test of time and has a long warranty to provide peace of mind. Its combination of assets could make it very appealing to a first-time car buyer. The standard equipment list also includes the most important tech elements.

The huge upswing in the quality of Hyundai's cars inside 10 years has to be seen and felt to be believed. From the seat stitching to the panel fit, the feel of the interior controls and the paint finish, the i20 must now be considered a quality product. Hyundai's image is strong with older buyers who value the five-year warranty that comes with its cars, but the i20 Coupe has a little extra style which should be enough to tempt a younger audience.

Sacrificing the extra pair of doors for sharper looks has an inevitable cost when it comes to accessibility, but for a car this size the i20 Coupe fairs reasonably well. For those in the front the longer doors make access even easier, while for those clambering into the back the seats tilt and slide a generous amount to make it as easy as possible.

USB and AUX connectors are immediately obvious from the driver's seat and Bluetooth is standard. The entry SE model has additional speakers to improve the audio experience, as well as steering wheel-mounted audio controls, while the Sport Nav model brings navigation via a seven-inch touchscreen.

The i20 Coupe is available in an additional colour shade compared to the five door, and in this Tangerine Orange Pearl its curves are better highlighted. Additionally the interior is brightened by orange detailing, although unfortunately it only comes with this colour; buyers choosing other shades must make do with the largely black cabin.

A car of the i20's size should never be difficult to park, and the i20 isn't. It uses no special driver-selectable parking modes, but features a variable steering system that automatically lightens the load at low speed to make manoeuvring easier. SE models feature rear parking sensors, while the Sport Nav model adds the clever reversing camera.

Ford Fiesta Still the biggest seller in the sector, the Fiesta is a firm favourite with a broad range