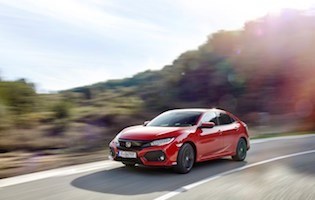 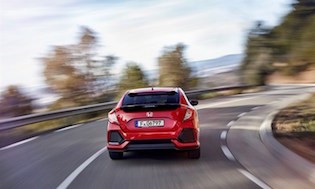 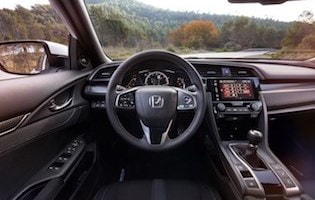 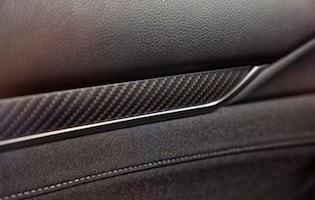 The Honda Civic has become one of the brand's most successful models of all time. The previous generation stood out with its confident looks, but now there's a new one. With distinctively angular styling, as well as a greater level of technology than we've seen on a Civic before, the new car appears to be better than ever.

While the previous-generation Civic had been definitively a hatchback, the new one has a certain saloon-like quality to it. Open the boot, however and there's no question as to what segment this car fits in, with a large load area being revealed once the rear hatch is opened. All manner of sporty touches allows the Civic to look purposeful on the road, too.

There are better levels of technology on board as well. You'll now find Android Auto and Apple CarPlay fitted, which means integrating your phone to the car's infotainment system even easier. Honda has worked hard to ensure that the Civic's cabin is a comfortable place to be, using soft-touch plastics in most areas – though the effect does slip at times.

Our verdict on the Honda Civic SR

Not only has the interior been overhauled, but the mechanics of the new Civic have also been extensively reworked. The car it replaces gave drivers a sporting experience but with the comfort you'd usually expect of a family hatchback. The new car aims to replicate that, giving people an involving drive matched with equally good levels of practicality.

With just two very efficient engines from launch, the Civic won't cost the earth to run. The 1.0-litre turbocharged petrol should achieve up to 58.9mpg with the manual gearbox, and 67.3 combined when fitted with the CVT automatic. Those cars fitted with a 1.5-litre engine should return 48.7mpg and 46.3mpg respectively. This means that trips to the pump should be few and far between.

Able to offer 478 litres of boot space, the Civic is certainly practical, while the rear seats can be folded flat to increase this load area. There's a decent amount of legroom in the back too, though headroom is impaired slightly by the sloping roofline. Up front, there's space in spades, with good storage areas for all manner of items. The overall cabin gives a feeling of spaciousness, owing in part to the large windows and wide windscreen.

Honda has worked hard to ensure that the information relayed back to the driver is clear, and it seems it has achieved this. The main display in front of the driver is laid out practically, while all of the buttons and controls operate with a satisfying level of quality. Those on the multifunction steering wheel are a little on the fiddly side however, and the buttons at the side of the car's main infotainment screen can be a little slow to react.

Though able to offer a sporty driving style, the Civic doesn't fail to deliver in terms of ride comfort. That new suspension set-up has been tuned to allow the car to corner without much body roll but still be supple enough to deal with potholes and bumps in the road. Adaptive dampers are included on higher-specification cars, though the standard springs are just as impressive – and we'd be just as inclined to stick to these, in truth.

Security really shouldn't be an issue with the Civic. It comes with central locking as standard, though an alarm is only standard on trim levels SR and above. It's quite an unassuming car too, despite looking relatively futuristic, so it shouldn't draw too many glances from wannabe thieves. A tonneau cover also comes as standard, shielding items in the boot from prying eyes.

All grades of the new Civic gain the company's new SENSING suite of safety features. That means that whichever version of the car you choose, it's going to be an incredibly safe place to be. All cars come with collision mitigation braking system, forward collision warning and lane departure warning, which all check the road ahead and can adjust the car should they detect a collision, or the car straying from its lane. Adaptive cruise control is also fitted as standard, as is traffic sign recognition, which will relay the local speed limit to the driver via the information binnacle.

The new Civic isn't just a simple mid-life refresh but an all-new car. It's platform has been designed to offer exceptional levels of rigidity, and is now 16kg lighter than the car it replaces, too. What does that mean? Well, a new suspension set-up sits within the platform to provide the car with exceptional levels of handling. Despite being an ordinary hatch, it's a very appealing car to get behind the wheel of, and one which doesn't disappoint once you do.

With five doors, five seats and a large boot, the Civic would deal well with being thrust into family duties. Children sitting in the back of the car have a good view of the road ahead, while sturdy plastics and durable seat upholstery should mean that the Civic can deal with anything they throw at it.

With a relatively low-powered 1.0-litre available from launch, the Civic isn't such a bad first car. It's got plenty of space, and the engine's small capacity means that it shouldn't scare insurers too much. It still manages to pack 200Nm of torque, which is quite a lot for a first car, but for the most part those new to the driving experience should find it a good place to learn. A slick six-speed manual is a great way to discover how to swap cogs, too.

Honda cars have always maintained an image of reliability and robustness at a competitive price. They also need to offer a sporty drive, and thankfully the new Civic has all of these things. The car's interior certainly confirms this, with everything put together with a huge degree of attention – though some plastics lower down the cabin are of a lesser quality. For the most part, though, the Civic is a hugely well-made car, and one which appears – on the face at least – to be just as robust as the one it replaces.

Thanks to doors that open wide, the Civic is an easy car to gain access to. That large boot that we previously mentioned isn't electronically assisted, but it's not difficult to raise and lower. The boot itself does have a low sill height, which makes loading larger items a breeze. The car's seats are now fitted lower to the ground, which does mean that you have to bend slightly more to get comfortable than you may usually be used to.

The new Civic comes with a huge amount of technology, bringing it bang up to date and in line with rivals. A large seven-inch touchscreen sits at the heart of the cabin, and it's here where all infotainment options are controlled – though base-spec cars use a five-inch unit instead. As mentioned, Apple CarPlay and Android Auto are now included, which allows users to directly stream media from their smartphone into the car. You even control the car's climate control functions through the display.

With plenty of trim levels, there's a good amount on offer in terms of customisation. Distinctive, large air intakes fitted at the front of the car give an instant impression, while the light clusters at the edge of the grille afford the Civic an instantly recognisable face. There's a good variety of colours to choose from too, as well as wheel designs. Interior trim options are just as numerous.

As a hatchback, the Civic – unsurprisingly – doesn't have a huge footprint. Thanks to relatively light steering at low speeds, it's easy to manoeuvre. Higher-spec models get front and rear parking sensors, as well as a rear parking camera – though parking the car isn't much of a chore without them. The spoiler fitted to the rear does restrict rearward visibility, however.