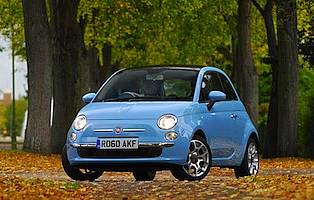 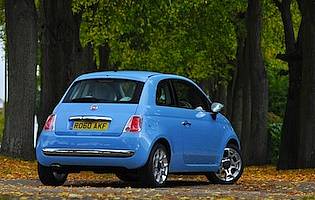 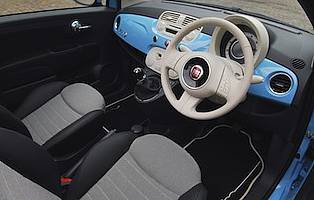 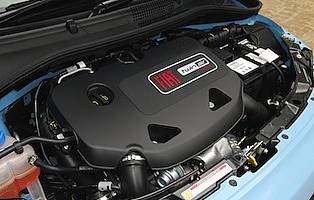 The little car from Fiat with the retro look has bucked all the trends - fashionable cars usually have a short shelf life but since inception the Italian firm's 500 has gone from strength to strength. Granted, regular association with BMW's Mini has helped but Fiat has also chosen the 500 as a platform for innovation, notably a frugal, advanced two-cylinder petrol engine.

Anyone with fond memories of Fiat's original 500 will no doubt warm to the prospect of a two-cylinder motor. In the name of reducing CO2 and boosting fuel economy in its small cars, Fiat's 'Twinair' concept offers exceptional refinement and low noise performance plus more than enough real-world thrust for its popular urban hatchback.

That's the theory according to Fiat. In reality the 0.9-litre Twinair motor emits a muted two-cylinder thrum and boasts ample torque for stop-start city traffic. Surprisingly, it's also got enough in reserve to maintain a steady motorway pace. Factor in widely spaced and, as such, flattering gear ratios and the whole package is an impressively rounded and well-developed one. Not bad for what was a clean-sheet design.

For some this Twinair engine is the technical innovation the car had been waiting for. No longer a 'me-too' trendy urban motor car, this particular 500 variant boasts more charm, character and potential than its modest footprint suggests.

Despite this impressive addition to the 500's amour, the purists have nothing to fear. As with all other 500s, the end result is a perfectly well mannered and practical little car. When behind the wheel, you get a distinct big car vibe thanks to the above average build quality and refinement levels.

Our verdict on the Fiat 500 TwinAir Lounge 3dr

Behind its recent fashion-centric activities with its 500, it's easy to forget that Fiat is a company with a long history of innovation. The firm's Twinair engine is the latest in a long line of clever technology, and is destined to find itself in a wide range of cars. As for the 500, the little two-cylinder petrol motor perfectly compliments the car's character - and does much to reduce CO2 and fuel consumption into the bargain.

The 500 isn't an expensive purchase - even if you don't exercise restraint over the options list. With the Twinair petrol model slipping under the magic 100g/km CO2 barrier, there's little need to buy the diesel - although that is a sub-120g/km car that might appeal to high mileage drivers. Overall, factoring in running costs and the purchase price, the little Fiat should prove inexpensive to run.

The 500 is not the big, bloated caricature of its predecessor that it could have been. However, the little Fiat is surprisingly accommodating; space up front is fine, with head, leg and elbowroom all reasonable. Storage space is modest though, as the door bins are shallow. At the rear, children will feel right at home but adults less so on long journeys on account of the modest legroom. At the rear the hatchback 500 possesses a good size boot and the rear seats fold to boost carrying capacity.

The main focus of attention in the 500 is the large, cowled display behind the steering wheel. It plays host to the speedometer, rev counter, trip computer and various warning lights and is both clear and intuitive. The 500's switchgear is familiar Fiat items and all work well.

Despite its size, the 500 will surprise you with its big car feel. Refinement levels are high, front seat occupants are well catered for and so long as you're short of leg, rear seat space isn't that bad - long journeys might prove uncomfortable for grown ups.

There's nothing special in the protection department despite the car's raised profile thanks to its looks. That said, the standard remote locking and immobiliser package should prove effective. If you want a more visible deterrent, an inexpensive steering lock would be a smart purchase.

Unusually for a small car, the 500 comes with generous seven airbags: front, side, curtain and driver's knee. The same attention to detail doesn't extend to the provision of ESP, which is only standard on the 1.4 petrol variant and cost option elsewhere. Rear seat mounting points are present, ensuring the 500's reputation as a child-friendly car is intact.

Fiat doesn't make wild claims about its 500 in a bid to tempt keen drivers. In reality the car is a solid all-rounder: supple suspension, a compliant ride, light but accurate steering, slick gearshift and good brakes are the order of the day. In Twinair form the car emits an oft-forgotten two-cylinder thrum, giving the little car character you simply can't buy. With ample torque and power available, the little engine delivers a relaxed pace around town but also enough thrust to maintain a sensible motorway pace with ease.

The Fiat 500 might prove to be a useful addition as a second car in the family, but don't expect it to be able to carry much in the way of family paraphernalia: the weekly shop and a pushchair or two for example. And like all compact two-door cars, it's always a struggle to make sure young children are secure and comfortable in the rear seats.

Leave aside its looks for a moment, because the 500's dimensions and ease of use make it ideal for a city dwelling novice. Good visibility, a modestly powerful engine range and light but accurate steering all ensure no surprises when you're just starting out.

Fiat has achieved good things in recent years, and done much to banish the old problems of poor reliability and long-term durability. Image-wise the 500 is clearly styled to tap into the demand for retro designed city cars and compete for a slice of the Mini's lucrative market share. Those with an interest in such style-led cars will instantly appreciate the 500, which is Fiat's goal after all.

The car's large doors open nice and wide, making it easy to access the front two seats. Tipping those seats forwards allows access to the rear seat, although you will need to be reasonably agile given the car's modest dimensions. At the rear the 500's boot little effort to open, although the aperture is a modest size.

Located high up in the fascia, the 500's audio unit boasts large controls and an easy to read display. Sound quality is good for something at this price point. High value models gain Fiat's Blue and Me system, which consists of a Bluetooth telephone connection and a USB port for connecting media players to the audio unit.

The final decision will be a matter of taste, it's fair to say that you're not short of colour options and Mini-style decals. Bold colours show the car off in a positive light, however. Predictably, the 500's interior can also be specified in a number of bright colours, which are perfectly in keeping with the car's cheerful personality.

The 500 is easy to park and manoeuvre at low speeds. All-round visibility is good, thanks in part to the raised driving position. The car's steering is light enough, but models fitted with the 'City' feature enjoy greatly increased steering assistance at the press of a button.

Renault Twingo Unusual styling hides straightforward mechanicals; could be more polished inside and out