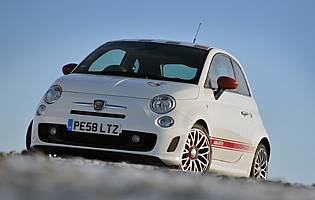 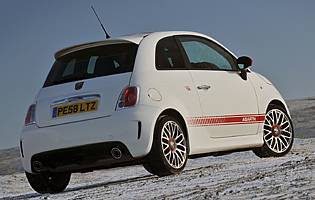 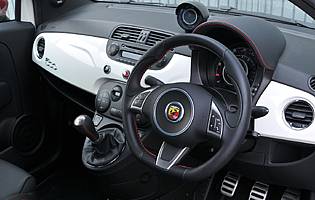 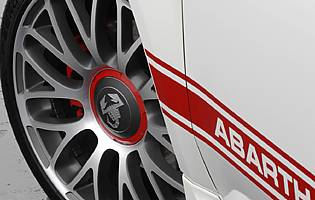 Fiat already has a hit on its hands in the shape of the 500, a retro-inspired machine that has captured the hearts and minds of thousands of buyers with its looks, charm and usability. Now Fiat has unveiled a further weapon in the shape of the 500 Abarth. The rebirth of the Abarth tag signals that this is a proper hot-hatch, designed to take on the German opposition.

As with any decent hot-hatch, the Abarth 500 starts with the standard car but adds a mixture of aggression, style and mechanical tweaking to deliver a car that is only fractionally harder to live with but a whole lot more fun. It's also something of a car in its own right, being shorn of Fiat badges and instead covered only with the label of Abarth.

The exterior has an instant impact, enhanced as it is over the standard car to good effect. What's not so obvious is that the 500 Abarth has been lengthened slightly over the standard car through a new front bumper arrangement, which has allowed the more powerful engine to be fitted. Chunky alloy wheels and a smart bodykit are standard, but the Abarth retains the high level of customisation of the standard car with plenty of scope for making it more individual.

The biggest change over the standard car is in the engine room, as the 500 Abarth inherits the 1.4-litre turbocharged unit seen in the bigger Grande Punto Abarth. The combination of small capacity and turbocharging allows the performance required but without a great sacrifice to economy and emissions, and this remains a car that can be enjoyed without a guilty conscience.

As well as the engine, the suspension and brakes are overhauled to cope with the performance, whilst on the inside the 500 Abarth benefits from sport seats, a chunky leather steering wheel and smarter fabrics. As with the Grande Punto Abarth, the 500 is also available with a high performance kit called 'esseesse', which adds more power, revised suspension settings and improved brakes for an additional fee.

The 500 Abarth takes the standard car and adds a whole new level of appeal. The looks alone would be enough for some buyers, but the quality of the driving experience means its good enough for true hot-hatch fans as well. Although perhaps not as good an all-rounder as the Mini, the 500 Abarth is bound to win hearts and wallets.

The 500 Abarth is still a relatively inexpensive way to get into a hot car and the clever turbocharged powerplant is capable of delivering good economy when driven with restraint. Insurance costs are reasonable given the performance, but overall the 500 Abarth is good value for money.

The Abarth 500 is surprisingly accommodating; space up front for two adults is fine, with head, leg and elbowroom all to a good standard. Storage space is modest though, as the door bins are shallow and there's no conventional glovebox but a deep shelf where one should be. At the rear, children will feel right at home and adults less so on long journeys on account of the modest legroom, reduced by the bigger seats. Further back, the hatchback 500 possesses a good size boot and the rear seats fold to further increase the space available.

For the driver, the focus of attention in the 500 is the large, cowled display behind the steering wheel. It plays host to the speedometer, rev counter, trip computer and various warning lights and is both clear and intuitive. The 500's switchgear is familiar Fiat and all work well. Essentially, the fascia mirrors that of the Panda - the 500's donor car - and is all the better for it. One change is the turbo boost gauge, which also encourages frugal driving by flashing to change gear in standard mode, and then flashing at the red line when in sport mode.

The 500 Abarth does sacrifice some comfort in the name of performance, chiefly due to the firmer suspension. It's fair to say that the 500 Abarth is best appreciated by enthusiasts: those without an interesting in sporty driving may find it too firm. In all other respects however, the Abarth is just as comfortable as the standard car, though the rear seats are best suited to children or short journeys for adults.

Despite the car's raised profile thanks to its looks, there's nothing special in the protection department. That said, the standard remote locking and immobiliser package should prove effective.

Unusually for a small car the 500 comes with seven airbags: front, side, curtain and driver's knee. This has help to ensure a top crash test rating, and should boost the car's profile with safety conscious buyers. Sadly the same attention to detail doesn't extend to the provision of ESP, which is only standard on the 1.4 petrol variant and a cost option elsewhere. ISOFIX rear seat mounting points are present, ensuring the 500's reputation as a child-friendly car is intact.

The Abarth does a good job of elevating the driving experience over the standard car, mainly due to the enthusiastic engine. With a broad band of torque, rapid acceleration is easy to access, accompanied by a keen exhaust note. The steering, electrically-powered as with the standard car, lacks a little feel and weight, but this is helped greatly by the Sport switch, which firms up the steering and increases the amount of engine torque available, too. It allows the driver to tap in to the full performance potential.

As a second car in the family the 500 Abarth might prove to be a useful addition, but don't expect it to be able to carry much in the way of family paraphernalia: the weekly shop and a pushchair or two for example. It may also be an issue to fit a modern child's car seat into the rear due to the space on offer.

The 500 in standard form is a perfect car for the first time driver, but the Abarth model is more expensive, more of a handful and will be harder to buy and insure. That said, it still represents one of the cheapest ways to get into a genuinely sporty new car, and therefore does hold strong appeal.

In general terms Fiat has achieved good things in recent years and done much to banish the old problems of poor reliability and long term durability. The 500's cabin is a perfect example of what has been achieved with high quality materials evident throughout. Image-wise, the 500 is clearly styled to tap into the demand for retro designed city cars and compete for a slice of the Mini's lucrative market share.

The small Fiat's large doors open nice and wide, making it easy to access the front two seats. Those seats are bigger in the Abarth model, and so access to the rear is a little more restricted and best suited to the slim or able-bodied. At the rear the 500's boot requires little effort to open, although the aperture isn't as big as a regular compact hatch.

The 500 Abarth gets an upgraded audio system as standard, which can handle MP3 CDs as well as other audio devices via the USB port. The sound quality is very good, and with controls on the steering wheel it is easy to control. An optional sat-nav system also incorporates a telemetry system so enthusiasts can record their performance when driving on track.

With many colours both inside and out to choose from, there is little point in dictating what is good or bad. Ultimately the final decision will be a matter of taste, although it's fair to say that garish combinations could adversely affect future residual values. Sufficed to say, the 500's interior can be specified in a number of bright colours which are perfectly in keeping with the car's cheerful personality.

Being a compact car, the 500 Abarth is easy to park and manoeuvre at low speeds. All-round visibility is good thanks in part to the raised driving position and generous amounts of glass in the cabin.

Space-saver fitted beneath the boot floor.

Vauxhall Corsa SRi lacks the vim of hotter VXR sibling, but is competent and usable